It was promoted as the final showdown.  During the preceding months there had been vicious campaigns run against the other.  Brutal, ugly propaganda campaigns aimed to persuade the judges.  The event was the Columbian Exposition. Westinghouse and Tesla stood on one side, equipped with the alternating current system. On the other side Thomas Edison and General Electric were trying to retain their current title by promoting direct current.

The contest winner would power the Chicago World’s Fair.  It was a winner take all prize because the systems were incompatible.  So it is with today’s ERP systems.

What do you mean?   Well I’ll get into that.

“Enterprise software is going through a transformation in a very significant way,” says Philip Say, Vice President for SAP Business Suite.  But not fast enough.  Despite the ERP behemoth’s attempts to move into the Enterprise 2.0 space they are burdened by bloated back-ends.

According to Thomas Wailgum Editor of CIO.com, “Survey respondents (in a recent CIO survey) said that the inability to easily modify their ERP system deployments is disrupting their businesses by delaying product launches, slowing decision making and delaying acquisitions and other activities that ultimately cost them between $10 million and $500 million in lost opportunities,” according to the survey report.”

Today’s Big ERP systems are not nimble, quick or extendable.  Yet the systems are constantly being updated or modified.  They don’t adjust well to changing business conditions and require massive IT departments to manage them.

Their databases are accessible, but become less efficient when trying to connect other databases to them because they have proprietary and patented methods that don’t allow competitive systems to access them (for example accessing indices).

Think of the phonebook.  I can search through every name sequentially to find a name, but it may take days.  Fortunately, the phone book is indexed so that I can find the name within seconds.  So it is with proprietary databases but they only allow their own systems access to the index.

That means today’s approach to ERP is a one system fits all, closed loop system.  And if a Sales VP tries to bring in an outside system like Salesforce.com for CRM he or she needs to jump through many hoops to convince IT to support it and connect it to the ERP system.  Yes, it’s hard to break into the closed ERP loop.  It’s hard because of the reasons mentioned above.

Yet there is another option.  An open source ERP option. 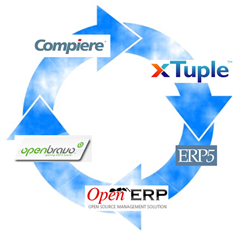 And within five years, ERP vendor lock in will be the exception and not the norm. There are already a number of open source ERP companies like  Openbravo, ERP5, Compiere, Open ERP and xTuple promoting open source access to their databases.  In the future it will be even more open and widely distributed.

Enter cloud computing.  Not just any cloud, but a cloud sphere.  Think of a cloud sphere as an alliance of vendors offering applications in the cloud that are seamlessly integrated (data, security, user profiles, etc.).  In other words, an open source suite of cloud enabled products architected to work faster and that easily leverage and use product suite information.  Because they are open and less exclusionary, this approach works well in the cloud. 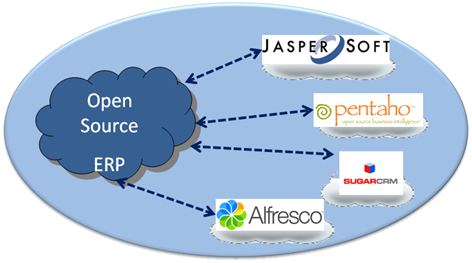 According to Steve Bjorg of MindTouch, cloud spheres already exists within Google.  They have a massive distributed database but it’s only open internally to Google.  Within Google, things run efficiently because internal users have permission to access the databases economically.  Externally, it’s not the case.  We can access bits and pieces of the Google databases, but in large part it’s closed to outsiders.  Moreover, even if we did have unlimited external access it would be terribly inefficient and slow.

That’s why Open Source companies like OpenBravo, xTuple, Compiere, ERP5 and Open ERP will build cloud spheres that not only enable access to their open databases (including indices), but do it efficiently and cost effectively.  These cloud spheres will allow customers to choose ERP components a la carte or in whole.  They will also offer components from other vendors like SugarCRM, Alfresco, JasperSoft and Pentaho that are certified to work in the cloud sphere.

They will win in the post ERP world because of their openness and flexibility in the cloud.

Open Source ERP companies will do it efficiently because their databases will be completely open to alliance vendors.   They will allow cloud sphere alliance vendors to subscribe to the secured data and to leverage the same methods and efficiencies as the ERP company.  They will still be the keepers of the data, but allow vendors to see the digested indexed version and to pre-fetch data as needed.

That’s why companies will be switching to ERP companies in droves.

How Will I Know When This is Going to Happen?

Open Source Perceptions and Challenges Need to be
Overcome

A few CIOs I know summed up today’s perception of open source ERP best for me: “I don’t yet trust open source ERP systems, I need to see a few large companies using it successfully.”  The other said, “I’ve used non mission critical open source technology in IT, but I’m not ready for an open source solution for ERP.”

These attitudes will change.  The priests of the past that have built up loyalties and interests to their proprietary vendors (SAP, Microsoft, SAGE, Oracle) will recognize the advantages of a cloud enabled open source ERP solution.  For them, an open source cloud solution will be much faster, cheaper and easier to deploy.  It will also play nice with best in class point solutions.

The issue of security and governance inevitably comes up in any cloud discussion.   “I don’t want to put my data in the cloud”, I’ve heard numerous times.  Yet Salesforce.com has proved that mission critical enterprise data is being stored off premise and more securely than most IT departments can do it.  This perception too will change.

What this all Means for the CIO

While today’s open source ERP systems are good, they haven’t reached the point where replacing your existing SAP or Oracle installation makes sense.  Yet, in the next few years, the reduced cost and increased benefit of a cloud enabled open source ERP system will far outweigh the benefits of a closed proprietary system.

Note: The Columbian Exposition opened on May 1, 1893. That evening, President Grover Cleveland pushed a button and a hundred thousand incandescent lamps illuminated the fairground’s neoclassical buildings. This “City of Light” was the work of Tesla, Westinghouse who had won the final showdown.