Browse: Home / SharePoint 2010 vs. MindTouch the Battle of the Platforms

SharePoint 2010 vs. MindTouch the Battle of the Platforms

(Editor’s note: we typically ask
guest bloggers to refrain from promoting their own products and
services. However we feel that this is not a promotional piece but a
well-written comparative review which should be valuable to our
readers, but with the caveat that Mark works for MindTouch. We
encourage anyone and especially Microsoft to comment / contribute.)

My first exposure to SharePoint was in 2003. I worked at A.T. Kearney and one of our clients was using it to manage their documents.   One’s first experience with SharePoint inevitably influences future views. It shapes your perceptions of the tool. If your experience was positive then you generally view SharePoint as a powerful addition to your business.  If it was negative, then it’s viewed as a nuisance and rarely used.

The issue that comes up more than any other among SharePoint architects is this: “How can we shape SharePoint to work easily within our business?  How do we build a tool that our employees will actually use?”  Employees can be tough to convince.  But with SharePoint 2010 it appears to be making the architect’s job easier.

I recently sat in on a demo of SharePoint 2010 at Microsoft.  In short, 2010 has come along way.  It’s more social and user friendly.  It also appears to be more of a web application operating system where it becomes the platform for other applications that enhance and extend SharePoint.  On the surface it sounds like MindTouch 2009, but there are a lot of key differences I’ll cover below:

The Short Short take: SharePoint 2010 is more business user friendly and offers much more out of the box to extend the platform.  MindTouch 2009 is much less expensive, more flexible and easier to build applications and extend than Sharepoint, but you need to be a developer or have some light programming skills.  MindTouch 2009 is available now while SharePoint 2010 may ship in Q2 or Q3 2010.

From my observations, SharePoint 2010 is moving towards becoming a Application Operating System.  Ostensibly, Azure is Microsoft’s future cloud operating system, but SharePoint appears to be playing a major role in supporting web applications. 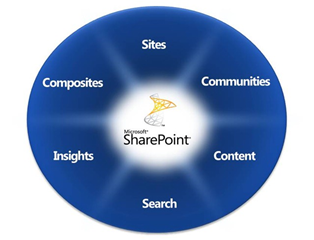 The improvements in 2010 over 2007 MOSS are substantial.  At first glance, 2010 is more social.  Almost an attempt to build Facebook for the enterprise.  They have Note Boards (similar to Facebook walls), activity streams and a coworker follow feature (like Twitter).  2010 will even suggest colleagues to follow.  The user profiles are more dynamic and useful which makes finding subject matter experts easier.   Lastly, Outlook 2010 has some Xobni or Gist like features that extend SharePoint to the email client.

One feature that struck me as powerful (maybe not to privacy advocates) is the ability to data mine emails (you must be using Exchange) for approved keywords.  If you want to see how often the phrase “Enterprise 2.0” is being used in employee email, SharePoint will tell you.

Similarly, SharePoint 2010 appears to have added the unique ability to contextually connect relationships with content and people.  While searching, SharePoint will suggest people, documents, tags and rated content which is a powerful feature when looking for the right answer.  2010 may suggest a person who has never written on the subject of Enterprise 2.0 on SharePoint, but frequently sends emails about the topic.  In 2010, that user is identified.

It’s integration with Office 2010 (shipping near the same time as SharePoint 2010) is second to none.  All tasks, documents, calendar items sync back to SharePoint so that there is always one source of truth.

Business intelligence (BI) is vastly improved.  Microsoft claims most of the BI use cases can be handled by the new SharePoint designer, but in the event they cannot, the remainder can be handled in Visual Studio.

There’s a lot more to cover, but  I’ve hit the highlights.  The takeaway is that SharePoint 2010 has vastly improved over 2007 especially in regards to the social capabilities, BI, and document management.  There are still several limitations, but that is the subject of another article.

MindTouch can make your ideas come true. They are in the expectations business.  You can invent and design products on MindTouch in a fraction of the time as compared to building them from scratch.  Yet with every promising tool is a downside; you’ll need to have some programming experience to maximize the capabilities of the MindTouch platform. 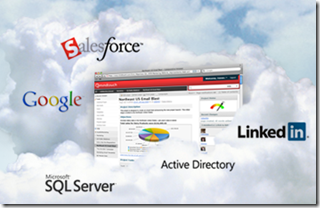 The primary platform differences between SharePoint 2010 and MindTouch 2009 are:

All of the document management tools are present including check in, check out, a desktop tool that allows drag and drop uploading and dowloading, Microsoft Office connectors, and content moderation.

MindTouch is a much more powerful solution for external facing communities.  Crowd sourcing, content moderation (you approve user submitted content before it goes live), and end user ease of use is better than SharePoint.

MindTouch 2009 search is less robust than SharePoint 2010, but new search  improvements in MindTouch 2010 promise to equal the playing field.

The ability to cloud enable products built on MindTouch is easier (to my knowledge SharePoint 2010 hasn’t promoted their potential ability).  That means building solutions like innovation portals, partner extranets, customer service portals, etc.  and offering them for sale is supported and encouraged.

Every MindTouch page can be a robust program.  You can build a project management solution on one page and a Twitter style follow me feature on another page.  Of course, this can become unwieldy so proper planning and governance controls are essential.

6 responses to “SharePoint 2010 vs. MindTouch the Battle of the Platforms”