Browse: Home / What is Asana.com and Will it Change the Way We Work? Part I

What is Asana.com and Will it Change the Way We Work? Part I

Asana, is a workplace productivity startup co-founded by Dustin Moskovitz, a co-founder of Facebook.  After paying just $9000 for the Asana.com URL in June 2009, the company has raised $9m in venture funding to expand their business.  The founders are predicting we’ll be working in a much more transparent and efficient way if they have anything to do with it.

Earlier this week, former Facebook alum and now Asana co-founder Justin Rosenstein said that solving the “friction of communications” in the workplace by innovating via “information transparency” was Asana’s goal.  The Asana team is making some big promises ahead of their launch.

Oddly, the way their solution is being pre-launched is similar to the way Spock.com was announced by Michael Arrington and Tim O’Reilly back in 2007.  You remember, a lot of hype about changing the way we search through social networking but with very little follow through from Spock.  I mean who used Spock.com?

“We are not taking existing tools and porting it over the to web, but rethinking how people can productively work together”, said former Facebook alum Justin Rosenstein.

Rosenstein added: “We want to change the way you manage information and how you keep everyone on the same page.  There are tons of misses here everyday in the workplace and it is death by 1,000 cuts.”

Bloggers and pundits following the Enterprise 2.0 space have recently made Asana.com the topic of a solution guessing game.  Incited by a $9m round of funding for Asana from Benchmark Capital and Andreessen-Horowitz, some high profile sites have written feverish stories after word of the investment was announced.

“We’re building a new kind of end-to-end system for developing web applications at literally an order of magnitude faster than is possible today,” said Rosenstein. “It’s fundamentally groundbreaking technology that involves many different kinds of problems in software engineering and computer science from infrastructure, algorithms and database work to programming languages and compilers.”

Sounds complex.  Making complexity easy and intuitive is the holy grail in software development.  I was intrigued so I reached out to Asana on their Facebook Fan page and got a very interesting answer. 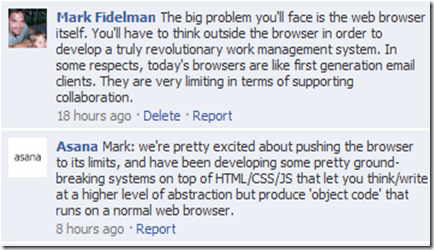 A little vague, but mystery may be what they’re shooting for.

Still, proprietary languages and 3rd party application developers usually don’t mix well.  Sure the new language allows quicker application development because it’s built to work with the solution. But getting developers to learn yet a new language (with limited skill transferability due to it only working with one solution) is a major challenge.  Asana will need to convince programmers that it’s worth their time and investment.

Will it be Open Source?

Early word from their Facebook exit interviews alluded to an open source solution.   No word yet on whether Asana is following through with that earlier statement.

My Take on the Productivity Challenge

“With Asana’s hosted service, status meetings will be unnecessary. Organizing yourself and communicating what you’re doing should be the same act. We’ll fix the explosion of information that knowledge workers need to manage. It will be a software solution to a human problem.”

Most of you know that I’ve been working in and studying the space since 2001.  The challenges to building a truly revolutionary work productivity solution that will greatly improve the way we work today is immense.  The current digital infrastructure doesn’t support offline activities and barely handles online collaboration across disparate web properties and data silos.

For instance, think about employee actions, communication and meetings that take place in the typical office (let’s for now forget about non-office work).  Offline activities include:

How are these important aspects of work going to be captured in a technology solution?  How can you easily organize offline communication?

Then add the challenge of getting all of your ERP, MRP, CRM, HR, email and other systems working in concert to support your employees’ productivity.  Major issue since the big guys are not going to port their systems to Asana’s until they show some real traction in the market.

There is also the problem of today’s web browsers.  They don’t compare to their desktop solution counterparts in terms of performance and functionality.   Desktop software is built to support one application.  Asana will be limited by today’s web browsers unless as Google is doing they create their own.

And that’s the rub.  Today’s browsers aim to be the lowest common denominator in order to handle all web applications .  They are not tuned for collaboration, social networking, and application performance.

These are major obstacles that can’t easily be overcome with existing infrastructure that’s outside Asana’s control.

Don’t miss tomorrow’s Part II article on Asana.  I’ll cover what should be in the Asana solution in order to really increase productivity in the workplace.