You can now sign up to be a beta participant of SAP’s 12sprints project, “a collaborative environment for people to make better decisions based on data” or a “people-connecting, data-sharing, decision-making tool that actually sets work in motion.”

Early versions of the prototype were glimpsed during demonstrations by Léo Apotheker and Ian Kimbell at SAP SAPPHIRE in Berlin last year, and by Marge Breya at SAP TechEd in Vienna, and the project is now letting people sign up for pre-beta access to the prototype.

Beta users will get access to a “virtual war room” with various types of decision-making tools available. According to the www.12sprints.com site:

“It’s not just a place where things get discussed. It’s where things get done. Invite the right people. Bring in the pertinent data. And choose the most informed course of action with the help of pre-defined, interactive decision-making tools. It’s all built in. Everything you need to get everyone on the same page — finally under one roof.”

Marge Breya recently repeated her SAP Tech Ed demo for Information Week’s Fritz Nelson, with a scenario based on people collaborating on go-to-market strategy after a new company has been acquired:

“…[it’s] about a purpose-driven experience, and the user gets to design it. So I can set up my own purpose whenever I want, invite the people I want, and get the exact data I want and expertise at my fingertips.”

Marge decides that she disagrees with the current plan, so enters a new negative opinion: 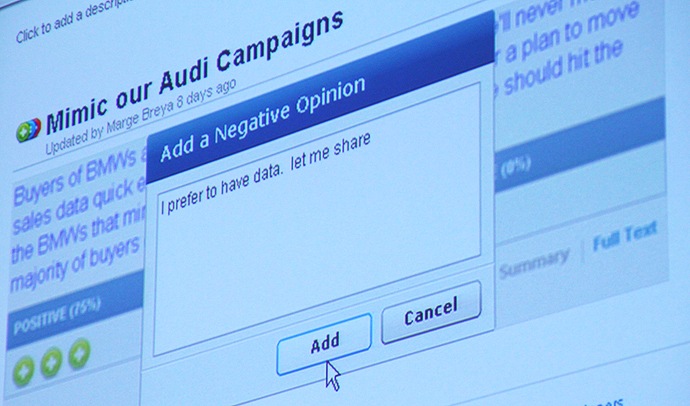 And uses another labs project called “Kona”, the next generation of on-demand business intelligence, to get the data she needs: 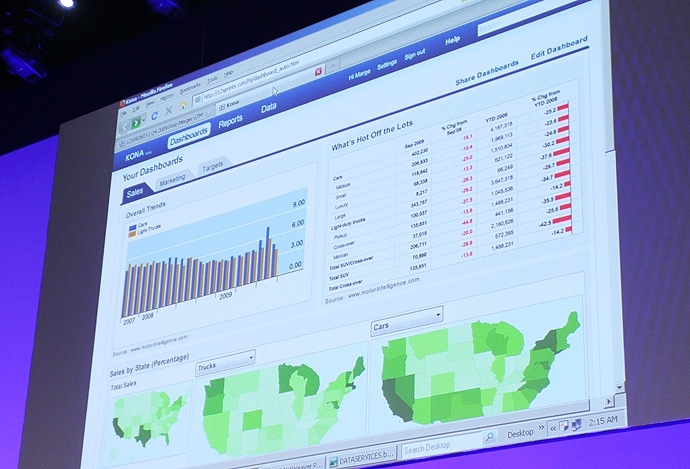 “We began with 12 Sprints, which I can best describe as a collaborative workspace, with a combination of project management and data sharing. You can pull in rich data feeds and share knowledge and make decisions, all in real time. In some ways, it resembles the modern Wiki. Where we explored other tools that help find and analyze data, 12 Sprints is where you would bring the most pertinent information back for team decision making.”

“Both 12 Sprints and Kona are cloud-based applications, run by SAP. Neither are available today, but both are expected to enter beta testing in November, with full release set for the first quarter (Kona) and first half (12 Sprints) of 2010.”

Business intelligence used to be called “decision support systems”, but the tools available have typically focused on gathering information, not the real-world collaboration required to turn that data into actual decisions and actions.

But that’s changing rapidly. According to Gartner:

If you’re interested in finding out more, you can get news by following the 12sprints team on Twitter or by signing up to be one of the first to get exclusive access to the beta.