Quick, what existing social network is Google+ most likely to displace in terms of people’s time?

A hearty congrats to Google for creating an offering that manages to be compared to both Facebook and Twitter. The initial press focused on Google+ as a Facebook competitor. But as people have gotten to play with it, more and more they are realizing that it’s just as much a Twitter competitor.

I wanted to understand how that’s possible. How is it Google+ competes with both of those services? To do so, I plotted Google+’s features against comparable features in both Facebook and Twitter. The objective was to understand: 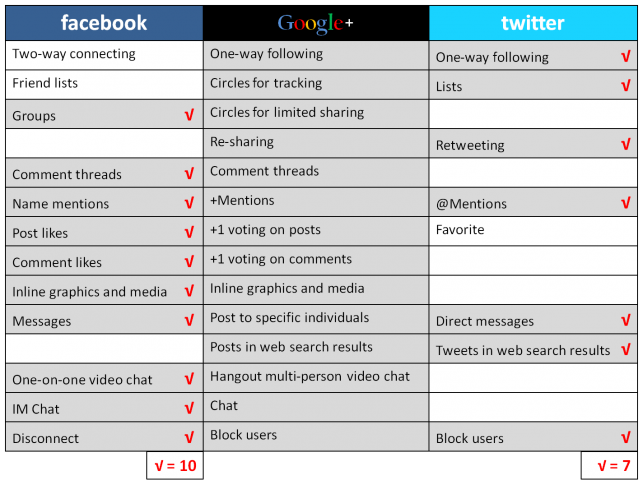 A few notes about the chart.

Circles for tracking: Twitter has a very comparable feature with its Lists. Facebook also lets you put connections into lists; I know because I’ve put connections into lists (e.g. Family, High School, etc.). But I had a hard time figuring out where those lists are. in the Facebook UI. Seriously, where are they for accessing? They may be available somewhere, but it’s not readily accessible. So I didn’t consider Facebook as offering this as a core experience.

+1 voting on posts: Both Google+ and Facebook allow up votes on people’s posts.Twitter has the ‘favorite’ feature. Which is sort of like up voting. But not really. It’s not visible to others, and it’s more a bookmarking feature.

When you look at the chart above, on a strict feature count, Google+ is more like Facebook. It’s got comment threading, video chat,  inline media, and limited sharing.

But for me, the core defining design of Google+ is the one-way following. I can follow anyone on Google+. They may not follow back (er…put me in a circle), but I can see their public posts. This one-way following is what makes the experience more like Twitter for me. Knowing your public posts are out there for anyone to find and read is both boon and caution. For instance, I’ll post pics of my kids on Facebook, because I know who can see those pics – the people I’ve connected with. I don’t tend to post their pics on Twitter. Call me an old fashioned protective parent.

That’s my initial impression. Now as Google+ circles gain ground in terms of usage, they will become the Facebook equivalent of two-way following. Things like sharing and +mentions are issues that are hazy to me right now. Can someone reshare my “circle-only” post to others outside my circle? Do I have to turn off reshare every time? Does +mentioning someone outside my circle make them aware of the post?

Google has created quite a powerful platform here. While most features are not new innovations per se, Google+ benefits from the experience of both Twitter and Facebook. They’re off to a good start.

(Cross-posted @ I’m Not Actually a Geek)