Part of my excitement about cloud is that it seems to me to be one of the factors that is enabling a real change in the way people interact with each other and with organizations. Recently and old-schoolmate of mine (from longer ago than either of us would like to admit), Simon Gianoutsos, wrote an excellent post detailing the experience he had skiing at one of New Zealand’s premier skifields, Coronet Peak.

Ganoutsos tells the story of buying a ticket to use the ski area, and being assigned a re-usable plastic pass for not only that skifield, but all the fields owned by NZski.com.

Instead f just  dumb plastic ID card however, this card contained an RFID which works as a gate pass for the various chairlfitf and T-bars around the skifield. So far so good, and nothing hugely revolutionary (although way more efficient than previous systems it must be said). But here is where it gets interesting.

At each ski lift, the lift attendant had an iPad upon which the photo of the person assigned to the particular RFID would come up as they swiped their card. A nice quick way for attendants to ensure there was no scurrilous sharing of passes going on between people.

On top of this there are kiosks positioned in various locations where skiers can buy their own day passes that are added to their cards – no more having to find somewhere to attach a printed day pass on a ski jacket. Skiers can also buy passes online – in the comfort of their own home as they say, resulting in significantly shorter wait times for those needing to use a manual ticket attendant.

Finally, in something of a coupe de grace, and with a nod to the gamification of everything, NZski is utilizing the information that it gleans from skiers wiping their cards to collect ski data for each pass holder. From a web UI, members can see data including the number of meters descended and how many individual runs the skier had done that day. This data is also compared on a “leader board” whereby members can rate themselves against everyone else for the day, week, season etc. 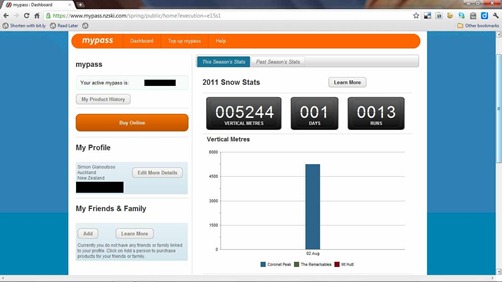 The NZski case study is an awesome look at how mobile devices, ubiquitous internet connectivity and novel data capture methods all tied together in the cloud, is driving changes for real people doing everyday things. Nice.