This should be of interesting to almost every blogger out there. We all know that there are some bloggers who maintain their anonymity like Mini-Microsoft; we also know that there are bloggers who have had their identity revealed under court order, or voluntarily before legal action was taken. An article in the NY Times talks about military bloggers, and while in general it is good that military troops are blogging, quite rightly the Pentagon is worried that troops inadvertently will put themselves in danger by revealing where they are and what they are doing.

What is interesting is that while the military is busy trying to hunt down military bloggers, or trying to find ways of minimizing access to social networks is that there is always a way around any form of road block put in the way. Anonymity to a certain point can also go a long way in ensuring that military bloggers can stay on the net and talk about the military. There are always going to be people who hate what they do, the military is no different. This does not mean that the voices of dissent should be silenced, if anything it makes the public view of the military better rounded. Bloggers should be talking about the real military, the one that the troops live with on a day to day basis. It is the personal stories that are interesting, we all have bad bosses, the senior master sergeant is no different. We all make friends on social networks with our management, and wish that we could back away from them later on in life, even the troops do this. There is already a panopticon on the things we do online when it comes to where we work and who we interact with, the military should be no different. 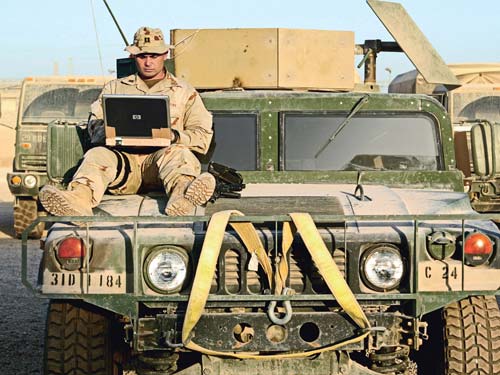 The military though, and since I served and loved about 80% of it I believe that I can say this, should take some lessons away from the RIAA/MPAA and the BSA. RIAA/MPAA have gone after sites where people are doing things that violate copyright. Using many of the same tactics that the military has done by finding out who people are and shutting them down. What this has done is fractured the file sharing community into other systems, that are harder to find, harder to infiltrate, and harder to track. File sharing has gone underground to such a point that the RIAA/MPAA have had to alter tactics to break apart smaller and smaller segments of the file sharing community. The RIAA/MPAA have also set up an artificial scarcity of goods, making it impossible or nearly impossible for people to find what they are looking for anywhere.

The BSA on the other hand has embraced openness, you can purchase software anywhere at any time for any purpose. There is no reason to steal, because the products are ubiquitous. The BSA is also only interested when it looks like it is a major player, but this does not mean that they will not go after individual file sharers either. Rather from what the BSA has done in the past is go after the majors, while issuing take down notices on individual files. The BSA has not been involved in any of the major lawsuits against file sharing systems preferring a more surgical approach to the dragnet approach that the RIAA /MPAA have used in the past.

The Military stands at the same cross roads, they can use the dragnet approach like the RIAA/MPAA to try to keep the troops from blogging or using social networks. They can put up filters, road blocks, URL Filtering systems, even make it official policy that no one can use a blog or social network from a military system. Or they can embrace the BSA approach where they know where everyone is, they know what people are talking about, and try to engage people, inform, and as a last resort try to do something about people being stupid. Depending on which way the military goes the troops will find a way around the process. The military can embrace, track, and help people make better decisions, or the military can attempt to silence, deter, detract, and stop the troops from blogging or using social networks. Of course I prefer that the military embrace, because if they embrace they stand a much better chance of engaging with troops on all levels and possibly avert another major problem like Abu Ghraib in the future. If the participants in Abu Ghraib had blogged, or even if bystanders had blogged about what was going on there, and the military was aware of those sites, the train wreck could have been spotted much earlier before it became a national tragedy.