Depending on whom you ask, 2011 was either the year of the iPad or the year of social. The truth is that they were and are equally weighted because they are catalysts for each other, and while each can exist without the other, imagining such a thing is like trying to imagine a world where Palm Pilots, Handsprings, and MySpace were the bomb, so to speak. I tend not to think of technology in terms of years at all, since it is too complicated and the more effort you put in, the less meaningful it becomes except to a very very small group of people who don’t happen to share your DNA. It’s all an evolution, which changes the question from “if 2011 was the year of social and mobile, then what will 2012 be?” to “what are the multipliers that will create what we’re after, and what is it that we’re after anyway?”

It’s not a philosophical question or even rhetorical – in 2012, we have to be after something besides change, don’t we? (That was rhetorical). Bringing this back home, the common memes in the predictions from 2012 is that social was overhyped and that it’s really hard to predict how far mobile will take us.

Looking at one chart, it’s simply amazing to see how the mobile landscape has changed in just over a year: 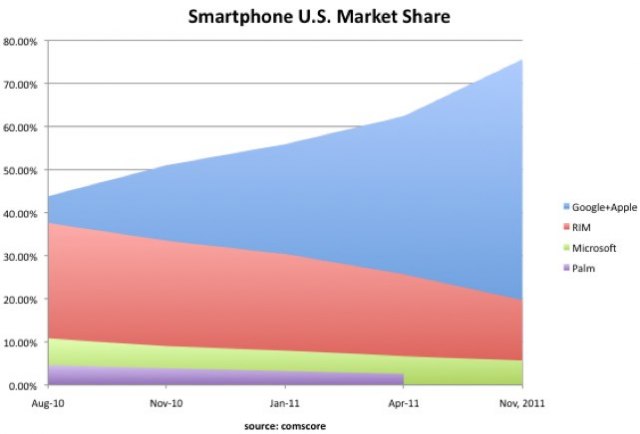 It is a topic covered by Paul Greenberg in a special edition of the Gillmor Gang Enterprise (see below). Paul says fundamentally RIM blew it. I agree. But it’s incorrect to argue that RIM had it to begin with. What RIM had was a device that allowed a command and control environment, a device that facilitated the siloing of corporations at the middle management and executive layers. In other words, the Blackberry was an email device and the beachhead for long established layers of hierarchical communication that are currently being eroded by the shifting sands of social.

The iPhone raised that level by showing that when you put the power of a previous generation of the fastest processors in the palm of your hand, you can do more than email. You should be doing something amazing. Apple proved it. Android helped spread it to the masses. That continuum exists in 2012.

But what is really driving this level of adoption is social. The top mobile social applications in 2009 were 1) Facebook 2) Foursquare 3) and various versions of Twitter. In 2011, social penetrated every other successful game changing application. That’s why Spotify, Turntable.fm, Instagram, and others are so popular. More importantly, the others from 2009 have continued to gain steam. In 2011 –55 percent of Tweets came from or are viewed on mobile devices (it was 40 percent one year ago). According to Facebook’s stats (frequently updated), 350 million people access Facebook through their mobile devices. And if you glance at the stats, you’ll also see that 20 million Facebook apps are installed every day.

This chart – really shows how much social is happening and one can speculate on how much of the activity is via mobile now and how much will be by the end of 2012.

Could Facebook exist without mobile? Absolutely. But the mobile revolution caught up with the social evolution and together they are the Wintel of the new world.

Jumping over to social and specifically the implications in the enterprise, Paul Greenberg says that we’re moving from a world where social was more or less about how a company broadcast messages to a person to a world where engagement that is controlled by the customers is going to be a central tenet of the new technology. It’s not enough to have a detached social economy. It’s about engagement. Paul knows he is right about this, and we agree. See the video broadcast and recorded on 12.28.11 here: 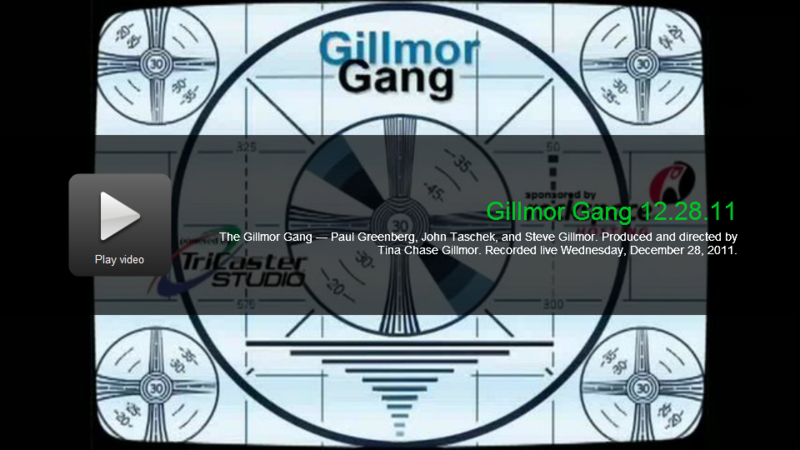 Paul explains what’s going on in the first 10 minutes of the video, but at minute 30, there is some good engaged discussion. If you’re crunched for time, jump forward a bit.

Paul went on to make some predictions as well on his own blog. These predictions are the yin to the other post’s yang; the pragmatic to the prognostic.

Meanwhile, Paul says that in part the expansion of his work was influenced by Esteban Kolsky, who was a guest on the Gillmor Gang Enterprise edition on 12.29.11.

Kolsky never at a loss for words explained that in 2012 the social trends will follow a hype cycle, a Gartner creation that anticipates the trajectory for technology evolutions.

Kolsky created this chart in a post entitled The Best is Yet to Come. 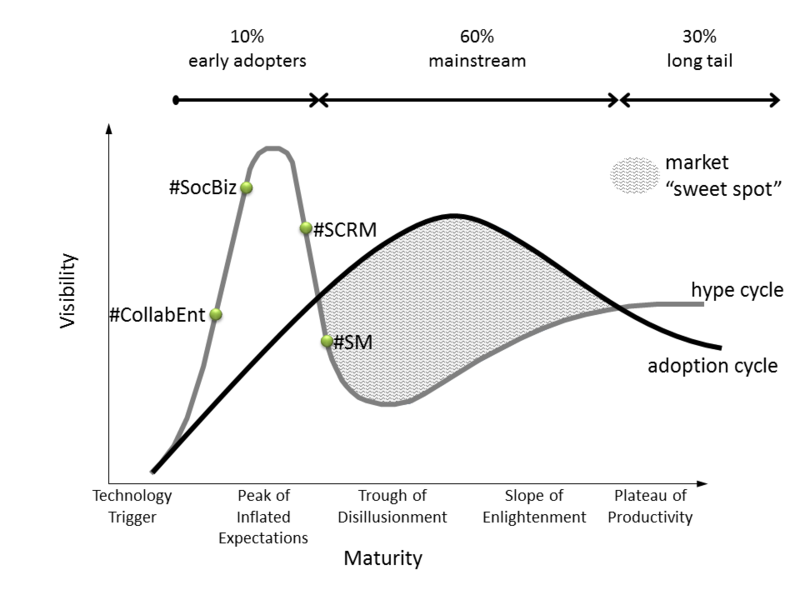 What this shows is that Esteban believes that social CRM and social marketing are heading into the infamous “trough of disillusionment.” Gartner, always careful to explain that the trough is not a negative thing, believes that it’s just people’s expectations were not met because there was so much hype. No one actually believes that the trough is anything but negative, including Esteban, who once was a Gartner analyst, although he will deny it unless coerced.

On the Gillmor Gang, Esteban says simply social was overhyped. 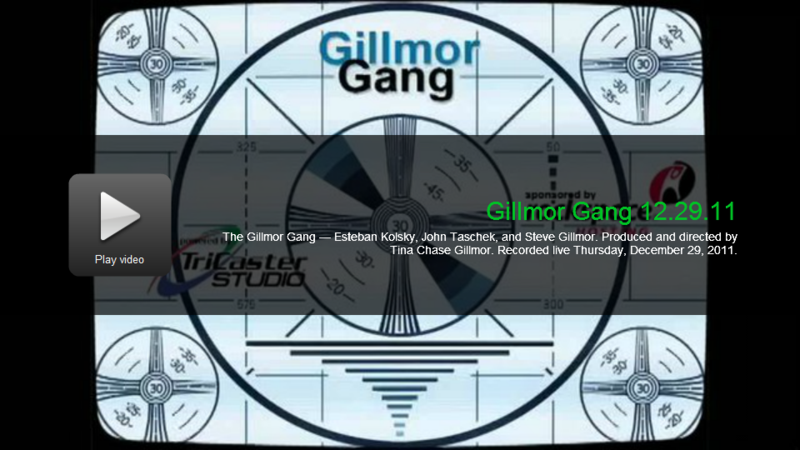 In an interesting way, Esteban, Steve Gillmor, and I all are in alignment – as we are with Paul.

However, we disagree about whether social is over or under-hyped. If you call social overhyped, the fact that every vendor says they are embracing social and offering social solutions that will solve the world’s problems. Well, sure – I’ll go with that.

But if you look at what is happening, we have truly only begun to understand social. It is in its infancy, sure as much as comparing the original 1983 “prototype” of the iPhone is to what actually shipped. What’s underhyped is the amount of power the consumer has and the speed of which companies are being forced to embrace something that is not part of their DNA. This is the area of semantics in which all the stars are in alignment and Esteban, Gillmor, Greenberg, and I agree without question. The struggle is that the ape-like companies of the past are saying they are social and delivering ill-conceived messages.

In contrast, social is under-hyped for the following reasons:

Sadly not every company is going to survive. While they sit ape-like, trying to graft human body parts while grunting “hello world” they have realized already with whatever cognizance they have that the world has already changed.

Welcome to the revolution.