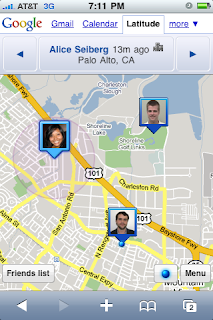 After a long wait, Google today announced the release of Google Latitude for iPhone. Well, it is not a native iPhone app but a web app. It runs on the Safari browser and takes advantage of the location support available on the browser since iPhone 3.0. It can be accessed from google.com/latitude. Some of the features offered by this web app includes

Our Latitude web app provides all the core functionality you mightexpect: you can see the location of your friends on a map and modifyyour privacy settings so that you control how your location is sharedand with whom.

It appears Google was forced to take the web app route because Apple was not interested in allowing an app that will compete and decimate the map application native to iPhone. However, I am a strong advocate of using mobile web applications to circumvent the restrictions put forward by the vendors of proprietary mobile operating systems. In one of my earlier posts on tapping the clouds to attain mobile nirvana, I have pointed out to some of the problems with native applications

The mobile OS vendors are no different when it comes to imposingrestrictions. Take the case of iPhone and every single developer,irrespective of whether they are an one person shop or big companieslike Amazon or Google, has to agree to the terms imposed by Apple.Often, this results in cutting down on the features which are otherwiseavailable. It is the same case with other mobile OSes too. Sometimesapp vendors compromise and cut down some of the features before theirapp is even accepted by the mobile OS vendor.Mobile app developers also face the same problem of how to port theirapps to many different operating systems used by different handsets.Unlike the desktop field where Windows has runaway marketshare,followed by Mac and a tiny portion by Linux, mobile landscape is muchmore competitive than the desktop world. The choices in the mobileworld are much higher and it forces the developers to waste their timeand resources in trying to get their apps work across all the mobileoperating systems. There is no uniform and straightforward way to getthese apps work on all the handsets.

I have supported the idea of using web app as an alternative option. When I heard that Google Latitude is available as a web app, I was pretty excited. But, after playing with it for few hours, I came back wanting more from it. This web app is nowhere closer to some of the native location based apps I have used on the iPhone. Before Google Latitude on iPhone begins to get significant traction, there are a few features that are badly needed to be there.

Well, there are many more features that can be part of Google Latitude. However, I find these four functions very important for my use. I would like to hear from the readers of this blog about their thoughts on the kind of features they are looking for. Feel free to add your thoughts in the comments below.