(This post is now updated, see bottom)
Netbooks, provider of an Integrated SaaS Business Suite for Very Small Businesses came out of hibernation with a new name: WorkingPoint.

In the never-ending debate of all-in-one vs. best-of-breed  I tend to represent the “old-school” which believes in the value of having one tightly integrated system for most business needs, especially for small business that likely don’t have the IT talent and bandwidth to deal with integration issues and multiple system providers.  That’s why I was really happy to see an affordable On-Demand integrated business management solution that was targeted for small manufacturing businesses – in fact for other types of businesses, too, as long as they hold inventory and ship tangible products.  They catered for the   VSB – very small businesses, the “S” in SMB / SME: typically companies with less then 25 employees, sometimes only 3-5, and, most importantly, without professional IT support, in which case Software as a Service is a life-saver.

NetBooks tried to cover a complete business cycle, from opportunity through sales, manufacturing, inventory / warehouse management, shipping, billing, accounting – some with more success then others.  Manufacturing, Inventory, Shipping and their integration to Accounting appeared to be a stronghold.  Salespersons would work with a Sales Catalog, warehouse staff with the Inventory List, manufacturing, with a Production Elements list, but in fact these were all one and the same, allowing one to define a product structure (Bill of Materials, BOM) with different physical characteristics, reorder points, pricing levels, warehousing requirements, marketing notes…etc.   In other words, different functions could update their own slice of the same information and it was shared with others (of course in a small business several of these functions may very well be carried out by the same person.)

Not having any procurement / purchasing functions and a nominally present, but rather weak CRM were the functional shortcomings.  But the big issue was usability: the UI wasn’t simply boring, it was so bad that is essentially rendered the system useless. 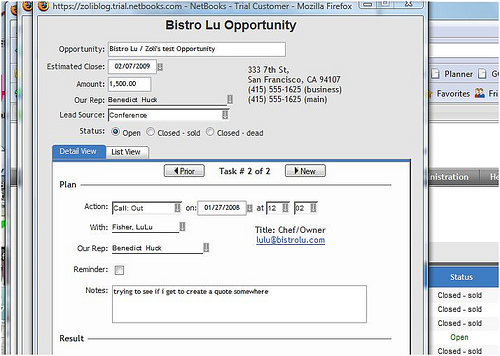 The company set out to completely revamp the UI ( I saw screen-prints and they were promising) but they discovered bigger trouble:  deep flaws in the software architecture that would not allow the system to scale.  A radical re-vamp was due: they stopped accepting new registrations, essentially disappeared from the face of the Earth and started re-writing code from scratch, this time in Ruby on Rails.  What came out of the hibernation is a renewed company, with a shiny new name, management team and UI.

The new UI is definitely more attractive; I had no chance to look deeper under the hood yet. (Update: I did, and am hugely disappointed.  See update section at bottom)  As much as I declared the original product unusable for UI problems, I was impressed by the process logic, the flow between various functional areas, and I hope the new system kept those strength.  We will do a more detailed review of WorkingPoint soon here @ CloudAve.

As for the other two changes: Founder and original CEO Ridgely Evers of Quickbooks fame is gone from active management, but he remains a significant shareholder.

That leaves us with the name change: I believe Netbooks was never a suitable name, suggesting an accounting focus for an (almost) all-in-one system.  Perhaps they had their eyes on NetSuite, the best known SMB SaaS Business System, which started its life as NetLedger?   Good pick or not, the Netbooks name was relatively unique at the time.  But what do you do when an unstoppable tsunami like the current Netbook (as in lighweight, low-cost net-computers) wave comes along?

This was akin to losing their identity and being forever lost for search engines.  It was also one of the rare situations when being unknown helped: they had no vested brand equity, so rebranding the company was a smart choice.  How good is the WorkingPoint name?  Well, let’s just say it’s better than BearingPoint

.  And given the immense popularity of netbooks ( the computers) I suspect WorkingPoint has a valuable asset for sale: the netbooks.com domain. (Update: if Yahoo cashes in on their domain names, why not the little guys?

Update: I signed up for WorkingPoint to look under the hood, and am disappointed.  Gone is the integrated all-in-one system for small manufacturers and any other business with tangible products and inventory.  What remains is basically a financial system with a nice UI – but this is one in a dozen, the uniquness is gone. Ironically, the Netbooks name would be a far better fit for the limited scope now, than it was originally.  I can only hope they will eventually develop the original scope...