Browse: Home / On the Lorenz Curve, and Sergey and Larry's Future Private Jet

On the Lorenz Curve, and Sergey and Larry's Future Private Jet

I’m so looking forward to the day when accessible oil finally runs out and we’re not all held hostage to countries we’d otherwise label as undemocratic (or worse) just because they provide the black gold that courses through our economic veins. Of course lots of people say similar things and this is nothing new, so why the post?

I read on the DailyMail the other day of the new private jet allegedly owned by Saudi Prince al-Waleed bin Talal of the Saudi royal family. This subtle and understated transporter is in fact a customised Airbus A-380 with such modest accoutrements as;

This in a country which Amnesty International accuses of gross human rights abuses including torture, execution by beheading and summary trials (often used against workers from poor countries).

Saudi Arabia has taken in over USD800 billion in oil wealth in the past five years according to reports. This wealth seems not to have done anything to smooth the Lorenz curve but instead has been concentrated around a ruling class of autocrats and hereditary leaders and half a billion or so will be dropped on this flying palace.

With any luck the oil will run out in the three years that it’ll take to create this travesty and Sergey and Larry will be able to pick it up for 10 cents in the dollar.

In the meantime enjoy the pictures below – forget for a minute the inquities this beast stands for and wonder in the design and engineering of the thing. 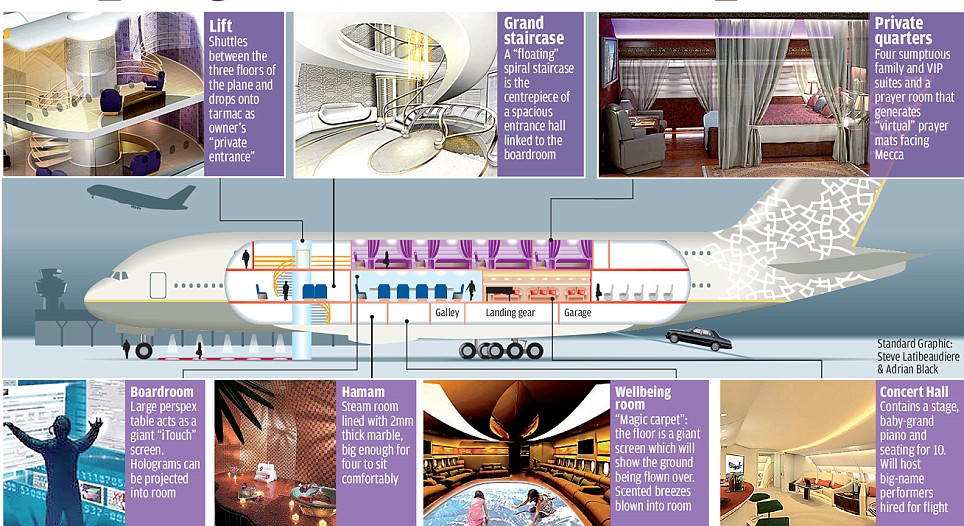