Browse: Home / SAP Does Not Do Your Laundry

SAP Does Not Do Your Laundry 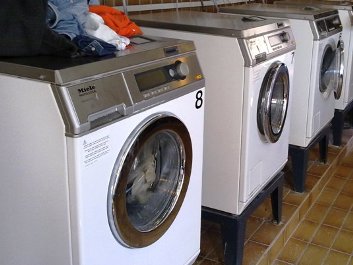 Except for the dryers being infamous for not performing their most basic task – drying –students at the Sogn Student Village near the University of Oslo were happy with how the laundry system worked. Just swipe your laundry card and run load, and the charges are conveniently billed along with the rent. Neat. But of course, all good things must come to an end.

The university had decided to spend roughly $14 million on a new accounting/payment system. The large company responsible for this system shall remain unnamed, but the new system turned out to be an array of Seriously Annoying Programs. Amongst its effects, such as delayed salaries, was the fact that it couldn’t communicate with the laundry system. Unknown to most of the inhabitants of the student village, dark times were looming…

The dark times included having to deal with a web-signup system that required 20-character user-names (could be worse) and resulted in failed logins, making web-reservations for a particular laundry machine which caused 40% idle times, bank transfers of fractional (penny) amounts..etc.  Oh, students needed to update their systems to be able to do laundry – that is if they were not Mac or Linux users, who were left unsupported (and in dirty underwear).  You really need to read the original story in full – but come back for the conclusions here… it’s not what you think… or what they think.

Comments are already flying, this story is making rounds on the Net, and is soon becoming another one to give SAP (and Enterprise Software) a bad name.

Unrightfully. It is not SAP’s system that forces students go unclean… it’s a poorly designed crappy add-on system created by unqualified third party integrators who probably did not bother to talk to real students and try to imagine their daily life, including laundry.  No, it was probably done by Consultants who get their cleaned shirts delivered to their hotel room on the Client’s dime…   In the early days of ERP (90’s) a commonly know figure was 1:10 – for every dollar spent on software licences another $10 was spend on implementation, training, support.  Later on the ratio came down to 1: 4-5.  Consulting is still where most of the ERP budgets are spent, so it is likely that out the $14M at most $2-3 went to SAP, the rest is Consulting Fat.

I spent a lifetime implementing SAP solutions and I’ve seen my fair share of good and bad implementations.  Excluding the real Users ( and no, User does not mean someone from IT @ HQ, it means the actual folks working with the system, be it in an office, warehouse, shop floor, delivery truck or laundry facility) is the bulletproof way to sink a project. And believe me, it happens with for-profit corporations, with so-called IT and Management Pro’s as well.

And here’s a novel idea: not everything has to be directly hooked to your enterprise system.  An extreme case I’ve seen was in the construction materials industry, where the point-of-sale is the actual silo that drops tons of heavy material (asphalt, concrete mix) onto a truck in  a matter of seconds.  They quickly realised they could not run these silos from their enterprise system: a one-second network latency could easily have proven fatal.  They have dedicated PC’s hard-wired to the silos, and are sending periodic batch data to their ERP.   Likewise, perhaps it would not be the end of the World if the SAP system did not control every single wash-load.

But I leave the detailed failure analysis to the real pro, fellow Enterprise Irregular Michael Krigsman…  in the meantime I’m taking the optimistic view, siding with this commenter:

The school may have implemented this to serve as a bad example for the business and IT majors. It teaches them a lesson in enterprise software development that they will not soon forget.