In what seems to be from the lower paleothic period but in fact was about a year and a half ago, I wrote a post about the Mean Girls phenomenon and Shakespeare. This in turn was not actually about mean girls or Henry IV, but about the interesting relationship of vendors, buyers, and the psychology of personalities involved. That’s as far as I’ll go, mainly because there was a more important point which was about the drivers behind the passion and intensity of some of the major technology brands.

In February 2011, a chart depicting the high tech giants looked like this:

Flash forward to today, I am no longer interested in the mean girls or Henry V but I am interested in illusions, particularly of grandeur. Therefore I am turning toward The Tempest to make sense of the ball sizes of these same high tech vendors.

The Tempest is perhaps the most bizarre of Shakespeare’s plays, but it’s one of my favorites since it was the influence of one of my favorite afterschool movies, the classic Forbidden Planet. It is part romance, part tragedy, mostly comical and appeals for self-congratulations – all facets of the technology business. And like a good technology story, it is not possible to sum up clearly. All you need to know is that Prospero, a magician and an overthrown member of royalty, has been stranded on an island for 12 years…perhaps not unlike one of the companies in the chart above. But on the island, the magician uses deception and magic to cause a storm so that other companies … I mean, members of the royal family (and friends)…are stranded as well. There’s a deformed creature, a fairy, and all kinds of misconceptions and politics. It’s like reading TechCrunch.

Checking in on the tempest brewing among brand passion, it looks like some things have changed: 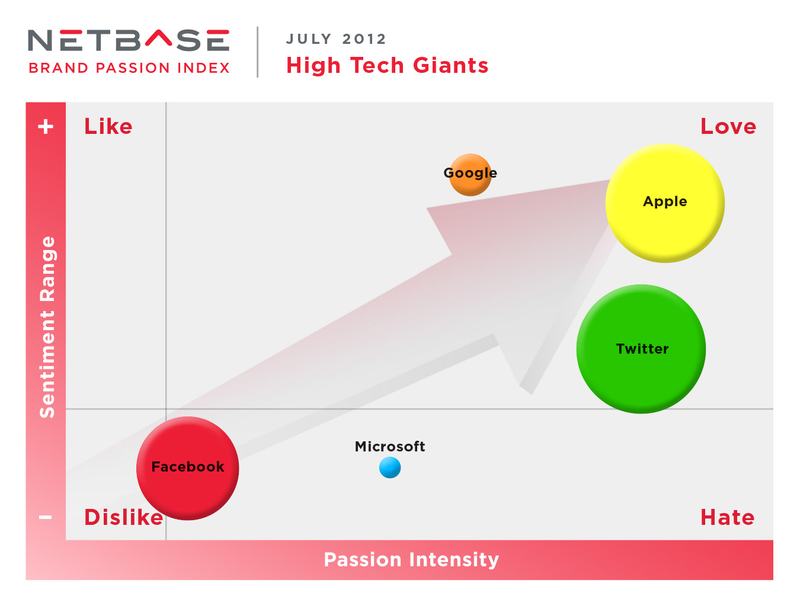 Facebook continues to generate amazing passion – both ways. The size of the Facebook ball is now enormous because the hundreds of millions of users have become more passionate. The love relationship is clearly in its ability to “eat the web” and create or facilitate engagement between persons, people and businesses, and brands. The negative is probably something to do with its IPO and the users’ inability to peer into the vision of why some changes are made, such as the Facebook Timeline. Now that Facebook has gained the traction and stabilized so to speak I expect the company to begin floating.

Microsoft’s situation must be troubling. Despite the most inundatory news stream to come out of Redmond, the ball is still small, smaller in fact than it was before. It has also veered more negative. I expect that the company is going to take a further hit with its partners because of the Surface announcements before it stabilizes and heads in one direction or the other. But to those who treat the company more or like a utility based presumptively on its stock price, this chart shows that well, those people are right … at least in relationship to the companies who are at the forefront of social media.

Speaking of the partnership issue. Steven Sinofsky wrote a bloviated and yet still impressive justification for not crippling its partners with the Microsoft Surface.  It however was disguised as a Windows RT RTM post. Either way, Windows will sell a lot. Maybe it will move the needle. Maybe a few of the key partners will be happier. Maybe the ball will unshrink. I use Windows. I’m not proud of it. In fact I don’t care until it crashes, which is fairly rare these days. Nice work … for a utility.

Google has seemingly turned the corner but perhaps there is a veil of apathy about the Plex. It’s just a tiny ball among the … well, as much as I try to write seriously here, the ball metaphor has me thinking like a 4th grader. It must stop. Now.  Detractors, feel free to say that this is analysis is below a 4th grade level. That’s my social media target as I plan for the future (and my son enters the 4th grade).

Google’s intensity is about the same but the ball is shrinking, despite excellent moves with the Nexus and Android. Perhaps part of the conversation has shifted away from Google as a brand and toward Android, which shows fragmentation not only with Android but within the entire company. Google+, meanwhile, is not moving the needle. This is counter to my belief that it is an amazing system simply not rendered correctly, which coincides with my other thought that a company has to be social in order to get social. It is amazing how fast and easy one can acquire followers or follow people but there is no ebullient passion. As a company Google has been very adept at disintermediating (to use a term common when Google was founded) people. As a company Google has stumbled at intermediating people.

Intermediating people. In the early Google days, people were sub-compact. Now to Google they are intermediate (nyuk nyuk). That’s a thought. They need to be engaged. It’s the nature of the tempest to destroy, isolate, and define landscapes. The tempest today is social.

One response to “The Shift has hit the Fan – Microsoft, Facebook Slides, Google Rises”