Browse: Home / I’m sorry, you’re just not incompetent enough to get it 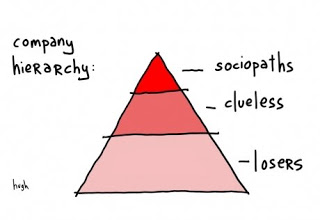 Olivier Blanchard made me do it.

@martijnlinssen 😀 As far as I can tell, incompetence isn’t a driver of failure. It’s a driver of advancement.
— Olivier Blanchard (@thebrandbuilder) October 16, 2012

And it is. Definition of advancement? Coming up soon. But this is the driver for most, if not all, of your life: work, life, religion, politics, social media (sic) and last but certainly not least successful Enterprise products.
Come again? Yes

Incompetence is what one needs to grow from big to huge. Incompetence is the driver for all the systems around us. Without incompetence, they’d stop working. Functioning? Now that’s a whole different kind of verb

For a definition of incompetence, the Peter Principle is very well suited.

Although humorous, Peter’s book contains many real-world examples and thought-provoking explanations of human behaviour. For example, he pointed out that Adolf Hitler was a consummate and superb politician due especially to his charisma and oratorical skills but reached his “level of incompetence” as commander-in-chief of the Wehrmacht because of the rigidity of his decision making (not allowing retreats when necessary according to the tactical situation).Similar observations on incompetence can be found in the Dilbert cartoon series (such as The Dilbert Principle), the movie Office Space, and television shows the BBC’s The Office or NBC’s Parks and Recreation and 30 Rock

It’s all there. Read Dilbert, read the Gervais principle – or just look around you.
Your political system? You’re not allowed to ask questions, and when you do, you’ll get vague answers. Will you get a “Well I’m not sure, but…”? or will you be satisfied with the answer? Then it’s just one incompetent interacting with another.
Your religious system? The same broadcast system where you never get to ask questions, and even if you do, you’ll get vague answers at best.
Your work system? Again, the same hierarchy decrees messages onto you. Dare to ask for an explanation of those? At the very best, you’ll get to keep all your limbs, not marked with an “X” and either get ignored or sent astray with “orders from headquarters”

Your life system? You be the judge there. But let’s move onto the most interesting one (for me): Enterprise software. After that, we’ll address the social media gurus

Enterprise software is expensive. It is so, because enterprises have money. Obscene amounts of money. You can’t walk into an Enterprise and offer them a simple, effective solution for a reasonable amount, because they simply won’t believe (you) that it works. Enterprises have been bred into the belief system that expensive equals good. They do so, because they lack knowledge of prior events, and because they are afraid to let go of their mental models unless forced to do so.
A proper crisis now and then could manifest itself as one of those forces – or maybe even the main one. But  herein lies the catch: (traditional) Enterprise software isn’t bought by Enterprises, it buys its way in itself.
Enterprise software wiggles its ass into an Enterprise via the golf court. Via “good friends”. Via flashy, content-free PowerPoints is how it settles itself onto their hosts in Board Rooms, or Ivory Architecture Towers

It uses the same system of putting oneself into debt that all our other systems do:

In a nutshell. Right in between point 1 and 2 is where havoc gets created. You get influenced. You know what you want (of course you don’t, but let’s ignore that fact for now), couldn’t possibly convene why that is so, and you hand yourself over to advisors. Those come for free for a very short while, and once they’re on board, they advise you for money
From then on, the system of putting-oneself-into-debt starts to kick in. You have invested an amount, which keeps growing – you need return! But in order to make sure you will make the right decision, just a little bit more investment is needed. That vicious circle repeats itself until someone decides to cut your losses, or a contract gets signed.
That point is crucial – the signing of the contract, that is. At that very point, it is decided that enough requirements have been gathered on a high level, and that enough trust is established
We all do that. Maybe we don’t jump onto the occasion, but at a certain point we feel we have passed the point of no return, and need to move forward. Yes there may be obstacles left, but those will be moved out of the way in due course – we think. And hope. And don’t know for sure
What happens next, can go either way:
Pun intended of course. But anyway, what happens next is that you get confronted with “Oh well we really like to make that happen for you, but it’s not in the contract” and you end up paying Time & Material for working out the details. And there’s where the slippery slope really kicks in, and doesn’t end anytime soon, if anytime at all
Fast forward millions, tens of millions, sometimes even hundreds of millions, and weeks, months and years. After go-live, you get to pay 20-25% annually for “support” and have to pay for the effort of testing and implementing upgrades and patches yourself. What that will cost? Who cares you pay that bill too
The system-of-putting-oneself-into-debt really works. It works marvels. It’s how the SAPs and Oracles of this world have survived for this long. Make a company pay e.g. 1 million for buying a system, another 7 million for adjusting it to his needs, another 0.25 million each year for support, and you have the best lock-in ever. Whatever sold, has become so expensive that even trying to get rid of it is discouraged by everyone
So, SaaS friends of mine, I wish you luck – and I really do. I really do hope that we can rid the world of these clumsy user-unfriendly 5-years-to-market crappy systems sooner than later, and boot their 150-200 an hour consultants who never would pay that amount for their own services if they had to foot the bill themselves
Now, onto Social Media. There are roughly three different groups right there. One of those I’ll dub “The Chris Brogans“, the other one I’ll dub the in-the-knows, and the remainder will be labelled as “formerly unsuccessful and probably fired sales- or marketing- men and -women who live in their mutual Twitter echo chamber and perpetuate in ReTweeting their own and their buddies’ nonsense”.

The same principle applies: what if you were to invite someone to chat you up at a daily rate of 35,000 dollars? You better have some results after that. What if you don’t? You’ll ask them again, or get less obscenely expensive people to “advise you” on the direction you think you want to go in.
Do you see the pattern here? I do

The system-of-putting-oneself-into-eternal-debt (eternal being a rather flexible concept, it might “only” mean the end of your career) works. This so-called social world? It’s being invaded by 1.0 losers trying to prey on 3.0 hopeful, or worse, 1.0 sharks who are very successful in preying on 3.0 hopeful

If you don’t get that, well, maybe this would be the time to re-read the title to his post.