Sometimes, when you see something sufficiently off-track, you need to respond, even when the person in question may be a personal hero of yours.  Geoffrey Moore (yes *that* one), recently wrote an article about Cloud Computing that made me very sad.  Besides being off-track, it felt to me as if Mr. Moore had spent more time looking at Cloud Computing from 50,000 feet through the lens of reporters, analysts, and others, rather than really trying to dig and understand why it is disruptive.

Like his contemporary, Clayton Christensen, Mr. Moore seems to be missing the forest for the trees.  In Mr. Christensen’s case, he failed to see the iPhone as disruptive, because he could not understand that the disruption was to the computing market, not the mobile phone market.  In Mr. Moore’s case a similar myopia prevails.

Of course, I speak as a different kind of businessman than either of these luminaries.  I speak as someone on the front line of cloud computing from the earliest days.  I also speak as a serial startup person.  Cloudscaling is the 14th technology startup I have been involved with.

Disruption isn’t a theory for me.  It is life blood.

Let’s break it down.

“the economics of cloud computing are so compelling it is clear, over time, that it will reengineer the entire landscape of enterprise IT.”

We then go on to understand that there are a variety of ‘cloud applications getting the most traction these days’ and then have these applications mapped to a variety of real world Earth Sciences clouds (Cirrus, Cirrocumulus, and so on).  That’s fine.  The taxonomy is wrong and somewhat conflicting, but it’s a simplified picture of the cloud computing world, so we’ll let it go.

This is, however, where things begin going dramatically wrong.  Mr. Moore’s breakdown of the applications getting the most traction is as follows:

What’s startlingly obvious looking at this list are the items that are missing. PaaS, DevOps, open hardware, next generation datacenters, and mobile applications, are all absent. Each of those missing items is having an immediate and far more transformative effect on large enterprises than anything in Mr. Moore’s article.

What is Cloud Computing?
This brings me to the key realization that I think Mr. Moore does not understand:

This change affects the entire IT ‘stack’, everything from how datacenters are built, hardware is designed, software is architected and deployed, and applications are managed and scaled.  From concrete to the apps, everything changes.  The following diagram highlights this change. 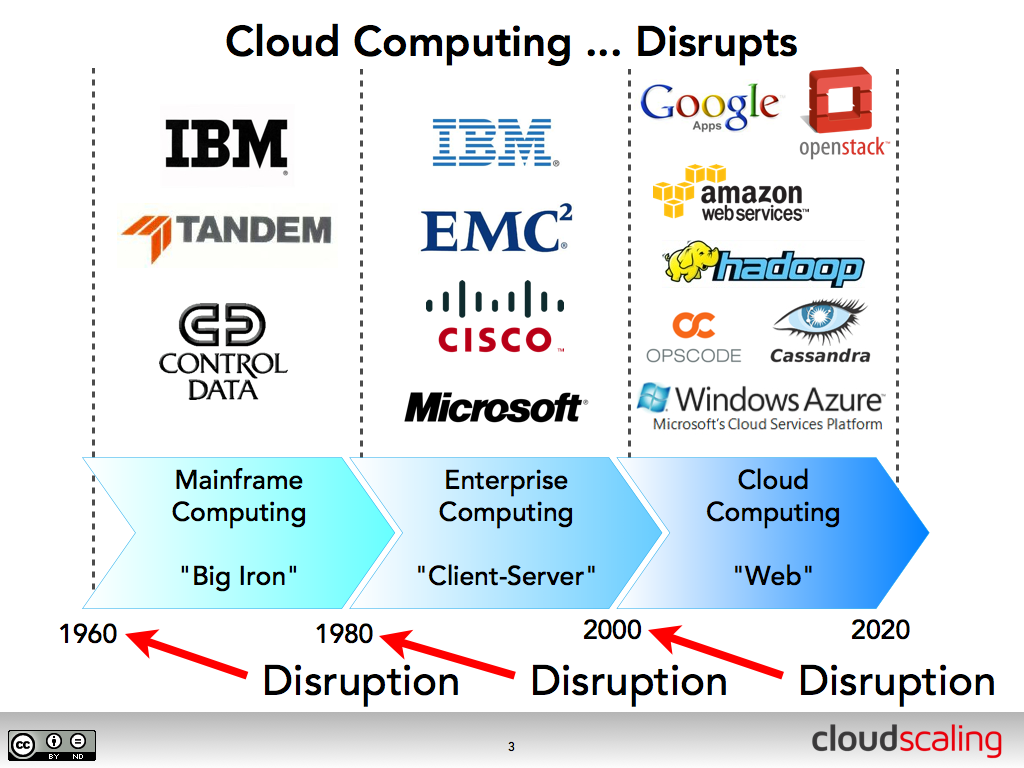 While it’s certainly true that economics is a driver for cloud computing, that’s not the compelling benefit. The real value of cloud is about a new generation of applications that the technology makes possible. These applications are driving new business models and revenue streams

Secondly, the technology shift itself is what causes the disruption because existing businesses, technologies, processes, and people are usually unable to make the transition to the new prevailing paradigm.  This is why CDC, Tandem, and other large mainframe players ultimately failed in the market.   For the companies who have successfully handled disruptions, like IBM, it involved a wholesale rethink of the business strategy and top down executive buy-in.  This is also why businesses like HP, Dell, and Microsoft are struggling so badly.  There is a sea change afoot, and mobile computing, the data explosion, and new scale-out cloud IT model are rapidly changing the rules.

History repeats itself and this is is where Mr. Moore is so off-track.  He basically equates Amazon [Web Services] to ‘Test and Development’, one of the more ridiculous bits of FUD spread by enterprise vendors in 2008-2010 that has been well and truly debunked.

For those not paying attention, Netflix, the world’s largest video service, runs 100% of its production operations (10,000+ servers) on AWS EC2.  Many other new Internet enterprises, like Zynga, Ticketmaster, and Salesforce run production workloads on EC2 as well.  More importantly, the earliest adopters of EC2 were actually traditional enterprises such as financial services, media companies, and the gaming industry, who have used EC2 for leverage and production workloads since its earliest days.

Rather than pick at other inaccuracies in Mr. Moore’s article, I would like to point out what is really at stake here: a deeper understanding of the disruptive nature of cloud computing.

Manifest Disruption
To understanding the unfolding disruption of cloud computing, one must understand that it is essentially a new IT model, largely pioneered by the most massive Internet players (Google, Amazon, Facebook, Twitter).  This IT model starts with datacenters built with extreme power efficiencies (PUEs reaching 1.2 or less), extends to open hardware projects (like Open Compute), and reaches into the transformation to a scale-out software architecture model (epitomized by “big data” projects like Hadoop and Cassandra).

I could go on and on, but the nutshell is this:

The largest Internet businesses on the planet figured out a new way to operate IT at scale.  It was born of necessity.  All of those techniques, technologies, and learnings are now bleeding out to the mainstream.  They create a radical shift in IT economics, in the range of 10x more efficiency in some cases.  This technology shift is “cloud computing” and it will replace enterprise computing over some period of time as the dominant IT paradigm in the same way that enterprise computing displaced mainframe computing.

In other words, we are in the grip of a manifest disruption.  It cannot end until some other new prevalent model displaces cloud computing.  And if time prior timeframes are any judge, that means 2030 at the earliest.

The new IT model isn’t for all businesses.  Not all can invest in or manage it.  Many will simply consume the fruits of others labor over the wire in the form of “as-a-Service” offerings.  Quite a few enterprises can and will adopt the new model *behind the firewall* in order to stay competitive.  This is already happening amongst our customers.  The change is difficult, disruptive, and at times hated, but like the transition from mainframe computing, it’s simply too big, too powerful, and too economically compelling to ignore.

The revolution is well underway and it’s something far more profound than “Email”, “Web Apps”, or “Collaboration.”

A Plea to Business Thought Leaders
To the Geoffrey Moore’s and Clayton Christensen’s of this world, I implore you to look to the thought-leaders and disruptors in these emerging markets.  It’s the people on the frontlines making the changes who can give you an unfettered understanding of what is actually happening.  Folks like Cloudscaling, the OpenStack Foundation, Amazon Web Services.  To rely on reporters, analysts, CIOs, or enterprise vendors, for illumination on the disruption of cloud computing is to rely on the myopia of those who are being disrupted.

Cloud computing isn’t outsourcing.  It’s more, much more.  You can tell from the extreme levels of vendor FUD, semantic wrangling, smoke-blowing, and screed.

6 responses to “A response to Geoffrey Moore: Manifest Disruption”