By Krishnan Subramanian on March 2, 2009

Cloudcamp Seattle was held on 28th Feb. 2009 at Amazon.com HQ (or should I
say Cloud HQ?). Between 100-125 people attended the camp, from people who
thought sitting on the 8th floor of the Amazon building will take them to the
Clouds to those who claimed to have nailed the concept of cloud computing. It
was a fun event and I will offer my brief take in this post.

CloudCamp is an unconference style local event held all over the world to
create an ecosystem for understanding, supporting and advancing all topics
related to Cloud Computing. It was kick started by Reuven Cohen of Enamoly
with help from Dave Nielsen of
Platformd.com. CloudCamp has been held in many places around the world including
London, Toronto, Washington DC, Singapore, Atlanta, Silicon Valley, (now)
Seattle. There is one going to be held in Bangalore, Germany, Sweden in the near
future. If you are interested in organizing a Cloud Camp in your
city/state/country, please check out this page. 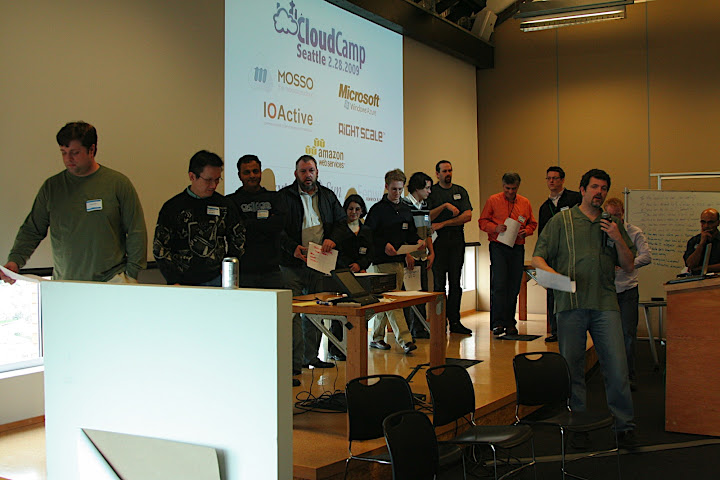 CloudCamp Seattle started off with a series of lightning
talks from the sponsors including Amazon, Microsoft, IOActive, Slicehost, Rightscale, etc.. It was essentially a
marketing opportunity for these vendors. After these talks, five people were
selected from the participating crowd for a panel discussion on the questions
raised by other participants. The questions were wide in their scope with more
emphasis on the enterprise and security aspects. They ranged from “why do we
need to download software to do cloud computing” (promptly picked up by a
panelist who was from Microsoft to push S+S agenda) to “What kind of
architectural changes one should make to move to clouds” to “What are the
national security subpoena implications of putting data on the Clouds”. Overall,
an interesting panel discussion in a truly unconference style with panelists
seated on the floor of the podium.

After this panel discussion, the unconference style talks started with one of
the sessions being “What is Cloud Computing” by Dave himself. He introduced the
concept of Cloud Computing to the participants giving them an idea of SPI model
(SaaS, PaaS, IaaS model). Microsoft Azure team had a concurrent session
convincing users about the interoperability in the Windows Azure platform. But,
the highlight of the day was a talk by Dan Kaminsky, the man who scared the hell
out of both vendors and users with his discovery of a DNS vulnerability last
year. His talk was titled “When irresistible Forces Attack – Security in the
Cloud” and he took the participants on a tour of what is in store on the
security front when we do computing at the Cloud scale. He highlighted what has
changed and what has not as we move from traditional computing to Cloud based
computing. He, then, talked about various uncomfortable facts on the security
front in the cloud based model. He concluded the session by emphasizing that
these issues should not scare us from Cloud Computing but, rather, get us
motivated to understand the risks and how to mitigate them so that we can better
benefit from the advantages of Cloud Computing. One of the highlights of his
talk was his emphasis on building hardware suited for multi-tenancy. I am
embedding the slides of Dan’s talk below.

Last, but not the least, Ward Spangenberg of IO Active talked about the
regulatory issues associated with moving to Clouds and what we can do about it.
It was a great session and I hope he writes a guest post about these issues here
at Cloud Avenue (Hey Ward, are you reading this? :-)). There were other sessions
going on simultaneously including how to scale Drupal on the Clouds, Gaming in
the Clouds, etc..

Overall, it was an interesting collection of people talking about everything
Cloud Computing. This unconference style camps will play a major role in
promoting Cloud Computing with people who don’t know anything about it and it
will also help us to advance the technology to suit the needs of enterprises and
governments. Let the conversation continue.