I posted a few weeks ago about the impending release of Sage’s first on-demand accounting product, SageLive. As I’ve said before, it’s all very well for a start-up to create a SaaS product but for a traditional software vendor to move (at least in part) to a subscription based service is a difficult ask – both technically and culturally.

Dennis Howlett has an excellent post looking at the strategic aspects of the Sage move and as he points out, the challenge should be slightly easier for Sage given that 61% of their revenue comes from services rather than software.

This evening I had the opportunity to have a live demo that Sage ran for me – a full product review will come early next year but in the mean time I thought I’d share my thoughts and observations. SageLive is being released today as a public demo – full release is penciled in for the first quarter of 2009. The demo was hosted by Clive Gray and Mark Cane, Head of SageLive and technical lead respectively. They were quick to point out that the release is beta only, and that they are fully aware of the need to iterate rapidly to meet the market.

As Dennis pointed out – SageLive in this iteration is a very lightweight offering aimed at micro businesses, generally of only one person size. As such they’re looking to tap a market that at this stage des not utilise any accounting product (online or off) rather these are businesses that use a manual cashbook or an excel spreadsheet.

I’ve always been a tad dubious about the micro end of accounting software. A business that is small enough to run their finances from a notebook, or a very simple excel file is, in my opinion, a fairly hard sell – even at the GBP10/month figure that Sage is suggesting. From a supply side of things, this low price means that vendors need to sell huge numbers of seats of the product to make a buck – this sort of scale is pretty demanding on architecture. Using (no doubt) the back of a Spanish napkin, Dennis calculated that to reach £100 million in revenue, SageLive will need some 833,500 customers.  That’s a heap of micro businesses and that number will take some serious marketing push (or a very viral/word of mouth uptake that traditional vendors are unlikely to gain). Clive was adamant that SageLive will provide to an entirely new market for Sage, when I questioned the seemingly inevitable clash between future, more functionally rich versions of SageLive and their existing products Clive stated that Sage recognises some competition, but would rather have that battle internally than compete with another vendor entirely.

Sage is intending to use it’s existing sales channels rather than forge any partnership at this stage. While I have very mixed feelings about the feasibility of launching a SaaS accounting product by utilising Accountants as your evangelists, clearly to reach the sort of scale that Sage wants (and that its shareholders will demand) is going to take some serious channel moves.

Given Sage’s massive presence within accountants, it is good to hear that SageLive will effortlessly integrate with the existing tools that accountant practitioners use. This is a real issue for SaaS accounting products – some vendors hope for the best, some forge partnerships with practice management software vendors while the big players with existing practice products can (and should) ensure their products work with the existing tools.

SageLive is two products – SageLive billing, a simple invoicing application that comes for free, and SageLive cash a GBP10 product that is a more featured application including banking, cash transactions, payments etc. At a technical level SageLive is a Javascript application that relies heavily on browser based caching to reduce its data footprint and increase speed. It does not rely on any plugins, flash or silverlight. Sage has worked hard to make it cross platform/browser (as all web apps should be) and it is reported to run fine on all the main operating systems and browsers.

Sage have thought long and hard about the backend scalability of the product – they’re comfortable that SageLive is sufficiently scalable to be a true multi-tenant, single instance for all, lightweight web app.

On to a feature overview

SageLive has a dashboard as the initial place a user comes to in the app. It attempts to give a visual display of a business’ health and has such nice features as the ability to shift modules around and resize. 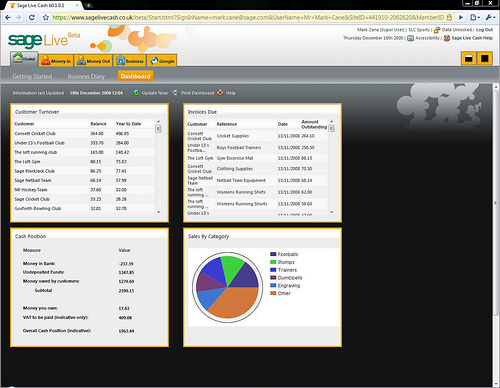 As would be expected for an application with sales as its most functionality complete area. SageLive allows for invoices to be generated and printed. Surprisingly it doesn’t do this particularly well – lacking good invoice templating and customisation and also lacking the ability to email an invoice directly from the application. Sage put this particular omission down to concerns around managing email in two places (the app and a client) however, and as we’ll see later, given their wholesale adoption of Google docs this could easily be managed. 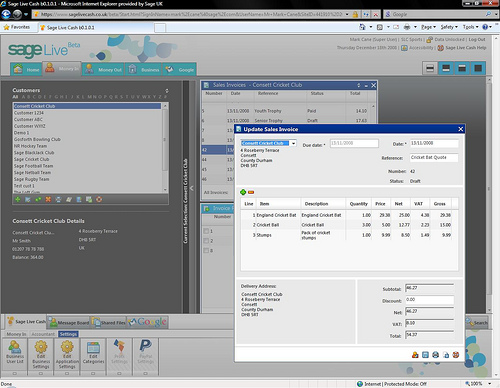 SageLive has an interesting diary where invoice due dates, tax payment dates etc can be populated to a calendar within the application. A Google calendar can also be integrated into this same diary. A couple of lacking features that I see are the ability to email reminder directly from the diary and also the ability to synchronise multiple calendars within the diary. An integration with email applications would also seem to be a no brainer here – it seems crazy that a user cannot email an invoice or payment reminder directly from the application. That said it’s a nice feature for micro businesses.

The power of connectivity

Someone inside Sage gets excited about the power of the network – such simple, but powerful tools as integrated real-time post code look up and online mapping integration have been included within the application. Sage have also very much tied their boat to Google docs. SageLive users can integrate the app with Google docs to create a rudimentary document management system. It’s actually nicely done – files specific to a particular customer (letters, spreadsheets, presentations) appear within that customers window – a smart move but one that would have been much better had it bee vendor agnostic. A similar functionality for other SaaS office productivity applications (and indeed MS Office files) would have been nice. 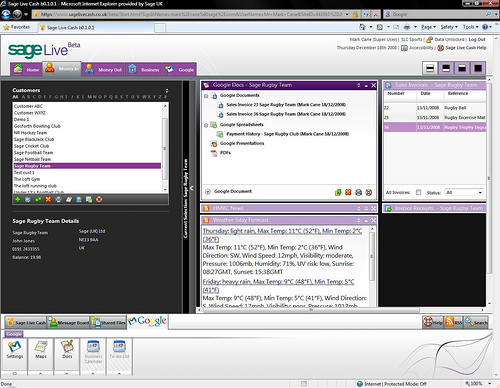 SageLive also has a built in RSS reader – it’s another attempt at aggregating disparate data types within one application. Portal play anyone?

SageLive has an integrated search function that searches across the entire data set for the entered search string. It’s a nice touch – especially give SageLive’s document management functions.

Strangely enough for a product pitched to one person businesses (and perhaps in a glimpse of where this is heading), SageLive has a fair amount of collaboration functionality. It comes with a simple message board, and also the ability to upload files to a central global repository for the business – usefull for standard docs such as terms and conditions, credit forms etc.

SageLive has fairly limited reporting functions – mainly P&L and balance sheets and the like. These are outputted to PDF but strangely enough given their wholesale adoption of Google docs in other areas, these reports cannot be outputted to a Google spreadsheet – seems an obvious angle for this product.

Sage has built a RIM specific mobile device. I was told that this is because they see the Blackberry as the de-facto business device. I have to say that in the micro market that Sage is targeting I totally disagree with this claim – and would expect to see a device agnostic application follow on very soon. The app itself is nicely done – allowing the most important functions to be performed. It takes advantage of on-device caching to reduce the data footprint and also to allow for short period of loss of connectivity – smart thinking! Some nice touches like adding a contact to the native device contact list and calling directly from the application are included.

SageLive cash includes a bank transaction function, where individual bank item lines can be entered and coded. Amazingly enough there is no ability to upload bank statements directly to the application – it means each statement line needs to be manually entered – a huge time hit for a micro business.

Sage should be applauded for their braveness. Introducing a product with limited functionality and obvious functional holes is an impressive feat for a big company normally totally risk averse. They say they’re totally aware that this needs to be an iterative process and want to work with the community to develop it./ On some levels SageLive introduces some really interesting features, on others it just doesn’t make sense.

Overall I’m pretty impressed and will watch with interest how it develops and how the market takes to it.

8 responses to “Going Live, With Sage. Initial Review of SageLive”