As a new (5-day-old) blog, we should take time and salute a Big Brother,  the
pre-eminent Web 2.0 blog, TechCrunch,
which silently passed the 1 Million reader mark last week. To think that one
day I though reaching 5K was a breakthrough…

My first
TechCrunch party was in October 2005 – back than it was called the 3rd
TechCrunch BBQ. The 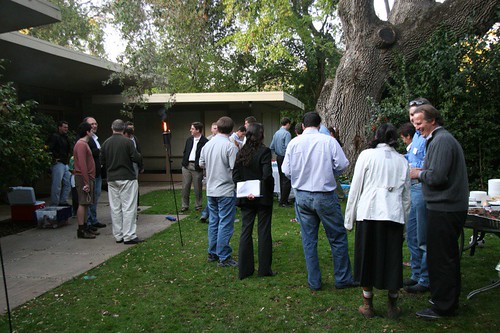 first two, which I had missed were (almost) impromptu backyard
BBQ's with a dozen or so entrepreneurs at Mike Arrington's house. I'm not sure
how I discovered these events, but it may have been Ethan's
blog, which led to a wiki with open signup. I started to monitor the wiki
for the next one, and a month or so later signed up for the 3rd event. The first
parking spot I found was half a mile away from Mike's Atherton house. Wow! This
was no longer a cozy BBQ, the pace was cramped with about 200 people. Lots of
food in the backyard, a keg that the geek squad could not force to produce beer,
and lots of startup product demos inside. It was a great event – probably the
last one right-sized for the  house.  As a newbie blogger I was impressed  with
what I considered phenomenal growth back
then:

Mike Arrington started a blog in June with the mission of “obsessively profiling and
reviewing every newly launched web 2.0 business, product and service”. Since
June, the blog has grown to close to 5,500 Feedburner readers,
a Technorati rank of 566, and made it to the CNET Top 100 list.

Too many companies are targeting an audience of
53,651.  That’s how many people subscribe to Michael
Arrington’s TechCrunch blog feed.  I’m a big fan of TechCrunch – and read it
every day.  However, the Techcrunch audience is NOT a mainstream America
audience.

The next milestone is July 2007, when  TC hit the half a
million mark. That’s 1000% growth for the second consecutive year!

Fast forward to today:  TechCrunch
reached 1 million readers (Feedburner subscribers, to be exact).
Congratulations to Mike, this is an amazing achievement.

One Million is definitely a better statistical sample than 53,651. Yet I think
Josh Kopelman’s point is still valid: startup entrepreneurs have to remain
cognizant of the other world, the “real world” outside TechCrunch’s reach.  The
GE Case Study at the recent
Office 2.0 Conference can serve as a real eye-opener: 400K users, 25M hits per
day – successful Web 2.0  startups are happy with that much traffic in a
month!

There’s a reason why the theme of this year’s Office 2.0 Conference was
Enterprise Adoption, why even Web 2.0 Father Tim O’Reilly
warns entrepreneurs to get real, why Web 2.0 blogs like TechCrunch
and ReadWriteWeb
are adding Enterprise focus – the world is waking up, smells coffee and realizes
where real business is.

That’s the world we intend to focus on here, @ CloudAve.  If you like, join
us in the discussions, and if you have a lot to say – we welcome guest bloggers.