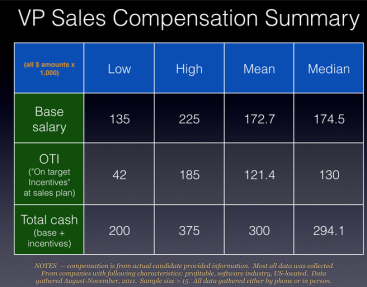 One key post I missed on the VP Sales journey was how to pay this critical role.  I don’t think it’s necessarily as nuanced and interesting a topic as how to pay and scale the sales team itself, or how to hire for this role.

But incentives are critical, and the VP Sales will likely be the Seemingly Most Expensive hire you ever make.  That’s stressful.  So let me tell you what I did and learned.  The 50/50/25+ plan.  And as you can see if you look at the Boston Strategy Group chart at the right, as usual, it’s just a little different from The Ordinary way to go.  Not a lot different, but meaningfully so.

It’s tough.  And I got most of this wrong before I got it right.

So here’s what I figured out, for us, and it worked well.  It’s just one way to go:

It was that simple.   And what it meant, like the sales rep comp plan, was if the VP Sales killed it — the money would follow.  And if he didn’t, it didn’t, and the cost wasn’t that stressful.  And since our Real VP Sales killed it, he made good money, was highly accretive, and we got to cash-flow positive at $4m in ARR even paying our VP Sales well and paying our sales reps 25% of the deal size.

A few thoughts on the plan:

Good luck!  I think anything works well here, as long you align interests, and the plan is achievable.

You can see from the above chart, and in the Boston Strategy Group data here, that most VP Sales are heavy on guaranteed comp and light on the upside.  You’ve been warned.  🙂