The OpenStack train keeps rolling, picking up steam. Today’s Havana release is a remarkable achievement for the Foundation which only recently had its first birthday.

Some stats from the Havana release, launching today:

You’re going to hear a lot about metering, orchestration, QoS in block storage drivers to guarantee app performance and firewall as a service, and other new features. The Foundation staff has prepared a useful and brief summary of all that’s new and noteworthy in Havana.

But there are two major themes that underpin everything that’s important about Havana.

#1: Continuous integration and exhaustive testing makes all of this possible. The work of teams led by Monty Taylor and Thierry Carrez in setting up OpenStack’s CI and Jenkins testing processes is how this semi-annual release pace keeps being met. Fact: they’re spinning up 700+ test clouds every day.

#2: People aren’t just looking. They’re engaging. The growth in developers contributing code to OpenStack continues to rise. Qingye Jiang (John) tracks trends associated with open source IaaS communities, and his most recent edition shows that the hyperbolic growth of OpenStack (measured by monthly Git contributors) is sustaining, while similar stats for OpenNebula, Eucalyptus and CloudStack are flat or declining. 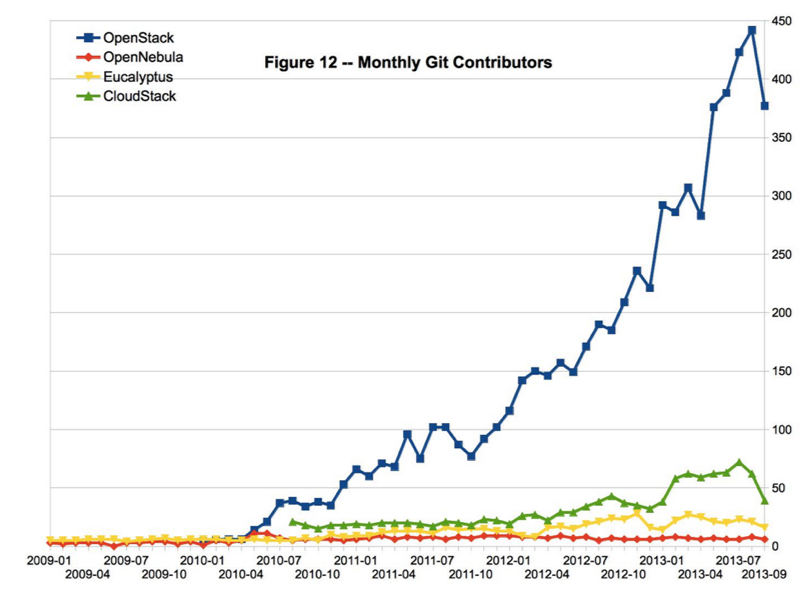 Engagement and testing are two sides of the same OpenStack coin. One would be irrelevant without the other. If the momentum proof is in the OpenStack pudding, then it’s time for dessert.