Browse: Home / Mobile Shows That The World is Not for Dummies

It’s far too easy to hate statistics and use them to make a point simultaneously. Let’s use them to show that the world is not comprised of dummies and idiots.

Beginning with the trends published by Mary Meeker about mobile adoption. She shredded some statistical constructs about the PC industry and its projected growth by showing what we already inherently see. In May 2013, she and Liang Wu, re-imagined the PC industry based on data from Asymco, Gartner, and Morgan Stanley data: 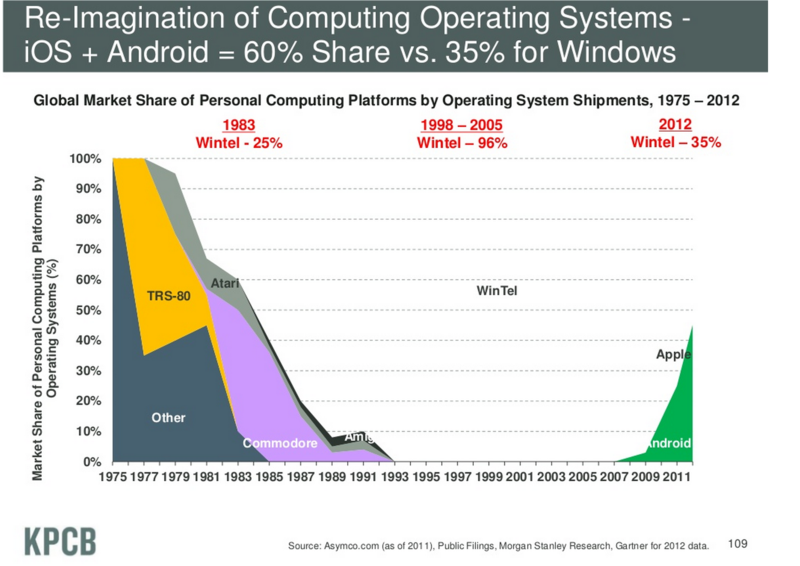 Let’s play with the statistics for a moment.

The main accelerator for smartphone purchase is a confluence of events. Individuals are accessing what was once considered technology as consumers. The way they consume the information is actually not through the lower level operating system but primarily through applications. The applications have become far more consumer accessible as numbers of users increases. And mobile hardware has gone through dramatic changes in order to empower consumers to use their individual devices more. Finally, the application use cases are outpacing the hardware improvements, increasing the necessity for rapid replacement (unplanned smart phone obsolescence).

It realistically sounds like check mate to the PC industry, but it isn’t the endgame yet.

When we look at overall enterprise adoption of smart phones, there are substantial barriers. The first is that enterprise software has not been fluid. Much of it had been designed for a future that was imagined between 1993 and 2008. Almost all of the top enterprise technology companies’ derive their revenue streams from software built or created during this time. It was a technology renaissance.

There are no renaissances in technology, however; the phrase is an oxymoron. This renaissance led to a feeling of disempowerment of the consumers, and a catalyst for such books with Dummies and Idiots in the title. It also led to the technology stewards to be called gurus, geeks, and nerds – all highly coveted titles by those in the industry. Technology after all is based on converting science into practical application. Who would not want to be practical?

It’s pretty clear that those geeks, nerds, and gurus have taken the practical and drove it right down the path to disillusionment – not theirs, but the people using it. In the quest for greater systems of record, the people required to use it went on a different path as a new set of tools became available.

The future of the enterprise is based on taking the systems and recreating it for consumers and customers in mind. Those that don’t do it will continue to siphon off maintenance revenues. Those that do will open a new mindset into how companies communicate and engage with individuals.

And since individuals use mobile devices, they have the power – the power of numbers.