Although much has been written about “bring your own device” (BYOD) and the “consumerization of IT,” it is easy to forget the practical dangers that arise when business users feel ignored by technology professionals. 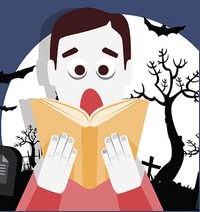 It’s a huge problem, so I was hardly surprised when mobile document management vendor, harmon.ie, announced a contest on “Rogue IT” horror stories. The company invited six analysts, including me, to judge the entries.

These horror stories are absurd, ironic, and outrageous; here are a few examples taken verbatim from the contest page:

Many of these situations reflect disaffected users trying to be more efficient in the face of unresponsive IT policies and governance. In every case, I am sure IT had valid reasons for denying users’ requests, but these stories highlight just how bad things can get when communication breaks down between IT and business users.

Too often, debates about BYOD ignore a fundamental point: users bypass IT when their needs are not met. When I spoke with Kim Stevenson, the CIO of Intel, she explained that shadow IT can reflect a positive or negative relationship between users and IT:

The business units make those decisions because they are trying to accomplish their objectives in the way that they think is the most efficient. If they are not choosing you, there is a reason.

I never bash shadow IT because they are fulfilling a need that ultimately IT could not fulfill. Once you get your head around that principle, then you can start working to figure out how we can best fulfill it for the company.

Joanna Young, CIO at the University of New Hampshire, echoes the importance of embracing a responsive attitude toward business stakeholders and users:

Building and retaining IT relevance requires being “deeply in touch with your customers, what they are demanding, and what the value proposition is for them.”

Expert reactions. Responding to the contest, several experts tweeted their views and comments about rogue IT. Ben Haines, CIO of file-sharing company Box, highlighted the gap between IT and business users while raising a question about IT’s role and accountabililty:

A related exchange among analyst Frank Scavo, Appirio co-founder Narinder Singh, and IT executive Peter Kretzman dissected the crucial need to balance governance (control) against responsiveness (flexibility). Given the nature of Twitter, these tweets present a series of connected points rather than a linear argument: 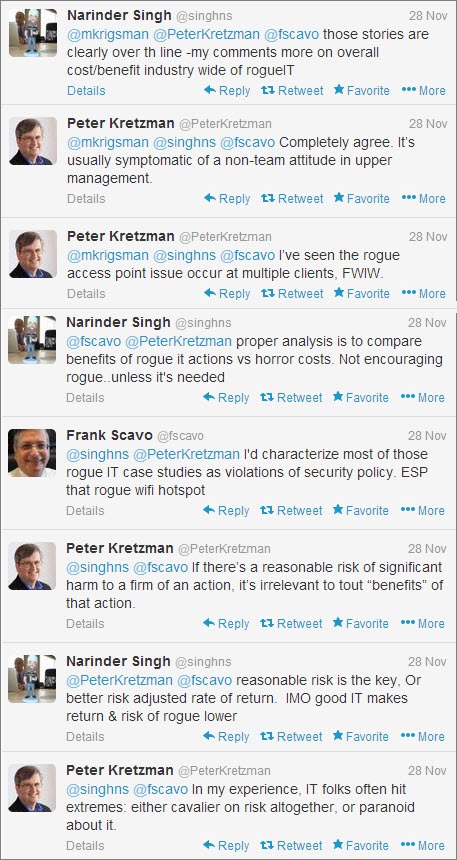 Technologies such as cloud and mobile have eliminated the natural monopoly that IT once held over hardware and software in the enterprise. Despite the humorous quality of these rogue IT stories, determining the balance between risk/efficiency and flexibility/responsiveness is one of the key technology issues facing every major enterprise today.

Well-known expert on why IT projects fail, CEO of Asuret, a Brookline, MA consultancy that uses specialized tools to measure and detect potential vulnerabilities in projects, programs, and initiatives. Also a popular and prolific blogger, writing the IT Project Failures blog for ZDNet. Frequently quoted by the press on topics related to IT management.

2 responses to “Rogue IT: Sad truths and unfortunate stories”