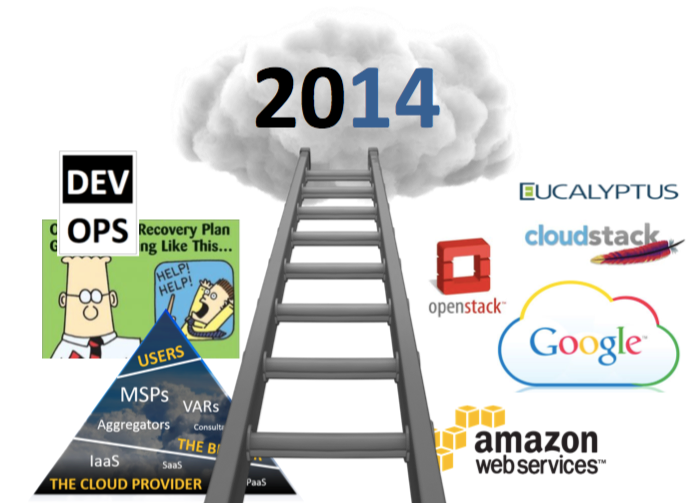 2013 has been incredibly eventful for the cloud industry, mostly for making itself an eminent presence in the mainstream IT market. Businesses of all sizes have made their ways to the cloud, confirming my 2013 predictions. Government agencies worldwide take the cloud seriously, as demonstrated by the CIA’s contract switch over to Amazon from IBM. AWS has proven its rapid pace of innovation and has introduced great leaders who have completely replaced the concept of sluggish IT servers with instances. While the market is still small, I believe it will take over the IT market sooner than some of us think. I am not alone in my forecast… another analyst predicted that AWS will become a $50B business in 2015, which means it will multiply 12 times its size from last year. So, have a look at my 2013 predictions and read on to see what 2014 has in store for the world of cloud computing.

Last year, the GCP (Google Compute Platform) team managed to clearly identify their direct competition, the AWS cloud. Consequently, they realized that they also need to invest in their IaaS offering. With a great deal of research, they quickly focused their attention on cloud lock-in. They presented out-of-the-box tools that import large chunks of data and “surprisingly” do actually ease the one-way data transfer process from Amazon S3 and Google Cloud Storage. Moreover, the Google cloud team learned that granularity of cloud resources is a key in the cloud and presented the ‘charge per minute’ of the their compute which is definitely a game changer. They mastered AWS’ weaknesses of AWS and presented replication between regions, high performance disks with excellent persistence and will undoubtedly have more to come. On the marketing side they are doing a very good job with the developers and are speedily working to close the market position gap. As I’ve followed Google’s pace of innovation for the last decade, it is an evident fact that this amazing market leader  has the `web company DNA`, culture and means to run even faster. Next year will be about users and MSPs who are tempted to try this innovative, fast cloud, not only because of Google’s monetary incentive, will but also out of curiosity and belief that this is truly the next big cloud.

I have written a good amount about cloud brokerage, and predicted, last year, that MSPs would flourish. I think it is one of, if not the most fascinating subjects of this upcoming year. The evolution of players such as Google and Azure will make cloud brokerage a real opportunity for new ventures as well as for cloud consumers. Brokerage is the platform for a real future Cloud Exchange Market. Every cloud pundit and leader is aware of this, so it has been pressed to become a viable option. The cloud MSPs are becoming stronger in their positions as cloud naturalists, while the cloud giants’ real war awaits them around the second half of next year, supporting their existence and ultimately, their business growth. The next big Cloud Managed Service giant is still yet to be known…but rest assured that I will be the first to announce it.

This pertains to enterprises moving to the cloud, of course. Although the enterprise private cloud doesn’t exist according to the AWS team, enterprise adoption of the cloud involves using an on-premise, `already-made-investment` in a “cloud way”. Fearless enterprises with seemingly endless means will try to deploy their private clouds using platforms such as Openstack, Cloud Stack and AWS platforms like Eucalyptus. The great part about the private cloud solution is that one of its most important features is that it needs to be integrated with the public cloud, which creates the appealing hybrid choice. This hybrid cloud environment enables a limitless, scalable cloud. As a result of endless discussions with IT leaders around the globe that use AWS cloud, it is an evident fact that the hybrid cloud actually creates a smooth migration stream into the public cloud and most agree that it is just a matter of time for the public cloud to hold the majority of the workloads.

The exponential growth of AWS re:Invent exhibitors gave us all a clear idea as to the amount of new startups that have entered the cloud domain, and the AWS ecosystem in particular. The “old” startups that deal with cloud adoption nuisances such as costs, monitoring and migration have graduated to their next stages with a second round of funding, greater knowledge of the industry and a more mature product and team. It is plain to see that the small cloud market players of 2013 and the ones yet to come are still under the “Cloud Management” domain and will approach the next issues in line, such as Backup and High Availability. As cloud consumers mature, cloud management will face more advanced issues, such as performance and availability, taking significant roles in driving new innovation.

5 – The Next Level for Enterprises

Last but not least, over the last year, enterprises finally began recognizing the term “cloud”. Some of which even understand what it actually means, not to mention the innovative ones that have already begun the adoption process. The `Enterprise DevOps` perception will find its way and real leaders will push for incorporating the new culture across their organization. In any case, the enterprises that are still behind will be forced by their ecosystem, customers and giant tech vendors. The enterprises that have already started their journey still see the cloud as their on-premise extension, hence they use it to generate replications for QA and Dev. This year, mature ones will take one step forward, looking for solutions to enhance their test and dev cloud deployments in order to take the next step and move their production workloads to the cloud.

Last year I predicted that enterprises would move to the cloud, which did, in fact, happen, in due time. Although we swiftly passed the education phase, I will be careful here and say that next year will not hold a great change. On the other hand, the market, along with the maturity of of the IaaS market and new cloud startups previously mentioned, will generate a strong substance for more enterprises to move faster in the years to come changing traditional IT into Cloud.

Cloud Computing Evangelist, Blogger and Lecturer at IAmOnDemand.com. Ofir has extensive experience helping ISV companies with cloud adoption and management. Today, Ofir is a Senior Vice President and Chief Evangelist at Newvem. Prior to this Ofir led ClickSoftware's On-Demand initiative and established the company cloud offering. He also held several positions at Zarathustra - SaaS development, including the company CEO.
The thoughts are his own and don’t represent anyone or anything he is currently associated with.