Tom Perkins is one of the founding members of the venerable venture capitalist firm Kleiner Perkins. He just had his Mitt Romney moment and his name will forever be etched in the collective consciousness of the tech community for this terribly insensitive and tone deaf letter to the Wall Street Journal. 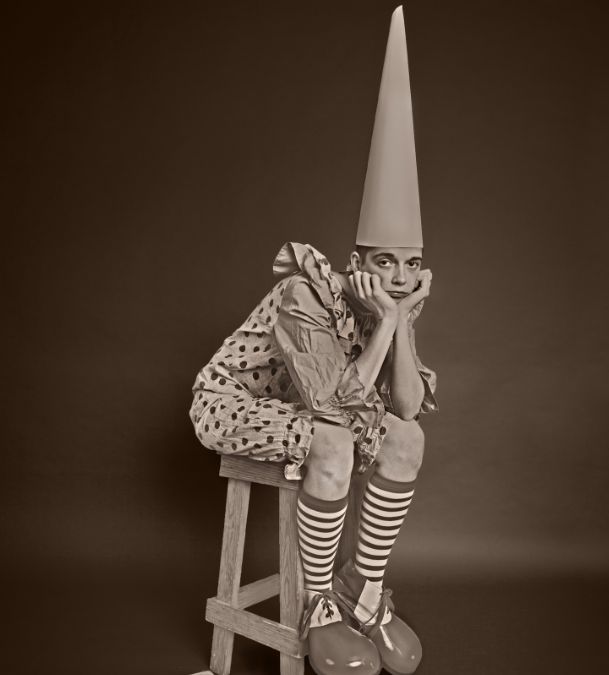 The headline of Mr. Perkins letter to the WSJ?

“I would call attention to the parallels of Nazi Germany to its war on its “one percent,” namely its Jews, to the progressive war on the American one percent, namely the “rich.””

People of middle or lower income families protesting the concentration of wealth in America is the same as a political party in Germany instituting a policy of systematically killing 6 million Jews and countless more who didn’t fill the model Aryan citizen?

It probably doesn’t take much more to explain how disconnected from reality Tom Perkins is. But let me try.

In this article about Tom Perkins in the WSJ you would have had a clue before his recent letter. He says – out loud apparently

“I’m called the king of Silicon Valley. “Why can’t I have a penthouse?”

This in response to his 5,500 2-bed penthouse in San Francisco where his construction budget alone was $9 million. Who says out loud that they are the king of anything?

I’m sorry, Mr. Perkins. You are now the bumbling dunce of Silicon Valley. I’ll let his recent letter speak for itself

From the Occupy movement to the demonization of the rich embedded in virtually every word of our local newspaper, the San Francisco Chronicle, I perceive a rising tide of hatred of the successful one percent.

There is outraged public reaction to the Google buses carrying technology workers from the city to the peninsula high-tech companies which employ them. We have outrage over the rising real-estate prices which these “techno geeks” can pay.

We have, for example, libelous and cruel attacks in the Chronicle on our number-one celebrity, the author Danielle Steel, alleging that she is a “snob” despite the millions she has spent on our city’s homeless and mentally ill over the past decades.

My first thought when I read this letter wasn’t so much about Nazism as it was about the French Revolution and the infamous “let them eat cake” comment. So perhaps his king reference was fitting.

My second thought was that his letter was aloof and tone deaf like Mitt Romney’s “47% dead-enders” rant.

And then I settled on a thought I couldn’t get out of my head. Kleiner Perkins. The venture capital firm that bears his name. While the office company name is Kleiner, Perkins, Caufield & Byers and thus it’s website is www.kpcb.com – nobody ever uses the final two names.

In tech circles one refers to the firm as either Kleiner Perkins, KP or Kleiner. It’s why I instantly thought out loud on Twitter

“Maybe it’s time for KP to shorten its name to K?”

Then it sunk in to me that it may become a necessity. This is not a mere gaffe that people won’t remember in 3 years. Perkins will forever be associated with greed, insensitivity and lack of historical context. If it were my firm I would rebrand as Kleiner.

Kleiner has taken a lot of shit in the press over the past few years and as someone who has known many of the partners and staff over the years I find almost all of it unwarranted. So I hate to see the firm saddled with the remnant thoughts of its long retired founding partner. 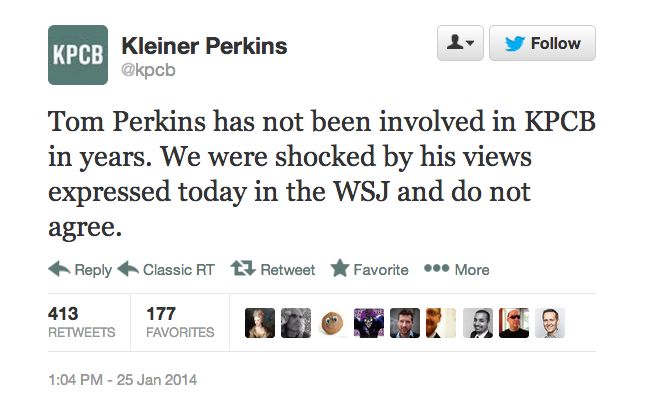 I was super impressed with the Kleiner’s rapid response to distance itself from Perkins. It was smart and savvy but the rapidity of their response shows that at its core Kleiner has no association with this ridiculous logic that Perkins espoused. 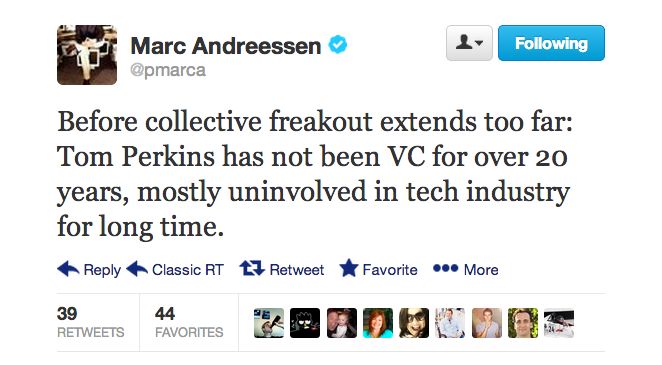 Tom Perkins does not represent our industry. If Marc Andreessen barely knows Tom Perkins you can be assured Mr. Perkins is not the king of anything in Silicon Valley. People don’t know him. I’ve personally never met him and don’t care to.

What about Kleiner? Investment Partner Megan Quinn weighed in publicly 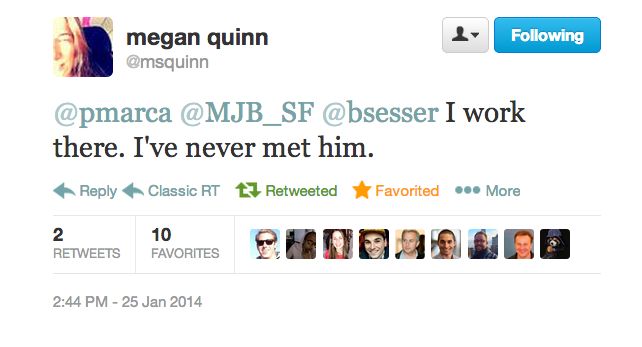 So if you need any proof that Perkins has no connection to his former firm if an investment partner hasn’t even met him he clearly doesn’t cast a long shadow over the firm.

In the end it is simply ridiculous to be fabulously wealthy and be a big baby that those struggling to make ends meet try to organize and draw attention to our social inequalities.

We have too much inequality in our country. It’s not just a matter of fairness or morality it’s a matter of good economics. Having a highly functional middle class is good polity for long-term economic growth. Having a fair society in which lower income families have a shot at social mobility is essential for our security and well being.

Is Google to blame? Of course not. Is Silicon Valley to blame. No. I’m a capitalist at heart and believe in Adam Smith’s Invisible Hand in which everybody looking out for their own interests makes the overall economy better for all. But you have to admit that we live in a skewed system in which the elite educated population gains disproportionally from our change from an industrial to an information economy.

I am a beneficiary of that. My parents weren’t rich (there were no rich kids in Sacramento) but we had more than most in this country. I had a nuclear family with a mom & dad until after I left for college. I had a computer at my house when I was 12. I had a public education all the way through college and my under grad – UCSD – actually cost less than $2,000 per year to attend between 1986-1991.

We have a responsibility to give back. We need to provide better education for the masses. We need to make sure our young kids have public schooling that trains them for the information economy. We need to deal with the rapidly rising housing costs in our nations centers like San Francisco, LA and New York. I don’t have all the answers but I certainly don’t blame people who are affected by our successes for their frustrations and protestations.

And then there are the Jews of which I am one.

Mr. Perkins. Jewish people weren’t persecuted merely for their financial successes and it’s total mythology to believe all Jewish people are wealthy despite our population over-indexing in education, arts and wealth. Jews were persecuted for being different. The sort of mindless intolerance that I see lobbed today against Muslim people, African Americans, gay couples and others.

Jews followed their own rituals that made them seem “strange” to gentiles. Jews were excluded from trade guilds across Europe for hundreds of years which made it impossible for Jewish people to have a normal, stable income from the most important jobs of those era. Because they couldn’t have “normal” professions they become traders, peddlers, market makers and financiers.

One only need watch Downtown Abbey to see what the wealthy classes of Europe thought of “businessmen.” We were hardly people of society. Study the origins of the retail sector and you’ll see Jews who emerged from market stalls like Marks & Spencer or Neiman Marcus. Read about the Schmatta business to learn one instance where Jews became great entrepreneurs out of need. As they say, “Necessity of the Mother of All Invention.”

Jews weren’t persecuted for being rich. Jews were scapegoated whenever countries had economic problems simply because they were different and were an easy target for political leaders. It’s a societal consequence when times turn bad and people affected look for somebody to blame.

Just look at the consequence of the economic downturn of the early 90′s in California. People didn’t look to blame the rich – they looked to vilify an easy scapegoat that was, “stealing our jobs, paying no taxes and committing all of our crimes.” So California enacted the horrific Proposition 187 that was later ruled unconstitutional. The law required doctors, teachers and social services workers to report anybody they suspected of being an illegal immigrant or they themselves could face consequences.

Never mind that every rich family in our state employed nanny’s that weren’t legal citizens. Every home owner gladly employed cheap labor to build our houses. Every ounce of fruit, nuts and grain were picked by illegal immigrants. They were our dishwashers in restaurants and often our bus boys.

Everybody benefited from having illegal immigrants because our economy integrated them so fully. Then one economic downturn and suddenly it is the Mexicans who were to blame. That is the moment I was least proud to be a Californian and wasn’t topped until we passed the equally shameful (and also unconstitutional) anti-gay Proposition 8.

Mr. Perkins. I am a member of the 1%. Yes, I earned. But with a lot of help that many of the 350 million other Americans don’t have. I’m ok with you having extravagant houses and competing with the likes of Larry Ellison for extreme spending on Yachts and such. That’s your prerogative.

One response to “Putting Tom Perkins Comments into Context”