Will customers adopt your innovation? Hope, fear and jobs-to-be-done

When will a customer decide your innovative product or service is worth adopting? It’s a question that marketers, strategists and others spend plenty of time thinking about. The factors are myriad and diverse. In this post, let’s examine two primary elements that influence both if an innovation will be adopted, and when it would happen:

A quick primer on both factors follows. These factors are then mapped to the innovation adoption curve. Finally, they are used to analyze the adoption of smartwatches and DVRS.

Let’s start with decision weights, as that’s probably new for many of us. In his excellent book, Thinking, Fast and Slow, Nobel laureate Daniel Kahneman describes research he and a colleague did that examined the way people think about probabilities. Specifically, given different probabilities for a gain, how do people weight those probabilities?

Classic economics indicates that an outcome has a 25% probability, then 25% is the weight a rational person should assign to that outcome. If you’ve taken economics or statistics, you may recall being taught something along these lines. However, Kahneman and his colleague had anecdotally seen evidence that people didn’t act that way. So they conducted field experiments to determine how people actually incorporated probabilities into their decision making. The table below summarizes their findings:

The left side of the table shows that people assign greater weight to low probabilities than they should. Kahneman calls this the possibility effect. The mere fact that something could potentially happen has a disproportionate weight in decision-making. Maybe we should call this the “hope multiplier”. It’s strongest at the low end, with the effect eroding as probabilities increase. When the probability of a given outcome increases to 50% and beyond, we see the emergence of the uncertainty effect. In this case, the fact that something might not happen starts to loom larger in our psyche. This is because we are loss averse. We prefer avoiding losses to acquiring gains.

Because of loss aversion, an outcome that has an 80% probability isn’t weighted that way by people. We look at that 20% possibility that something will not happen (essentially a “loss”), and fear of that looms large. We thus discount the 80% probability to a too-low decision weight of 60.1.

A job-to-be-done is something we want to accomplish. It consists of individual tasks and our expectation for each of those tasks. You rate the fulfillment of the expectations to determine how satisfied you are with a given job-to-be-done. This assessment is a cornerstone of the “job-to-be-done improvement” function:

Dissatisfaction: How far away from customers’ expectations is the incumbent way that they fulfill a job-to-be-done? The further away, the greater the dissatisfaction. This analysis is really dependent on the relative importance of the individual job tasks.  More important tasks have greater influence on the overall level of satisfaction.

Solution improvement: How does the proposed innovation (product, service) address the entirety of the existing job? It will be replacing at least some, if not all, of the incumbent solution. What are the better ways it fulfills the different job tasks?

Cost: How much does the innovation cost? There’s the out-of-pocket expense. But there are other costs as well. Learning costs. Things you cannot do with the new solution that you currently can. The costs will be balanced against the increased satisfaction the new solution delivers.

These three elements are the basis of determining the fit with a given job-to-be-done. Because of their complexities, determining precise measures for each is challenging. But it is reasonable to assert a probability. In this case, the probability that the proposed solution will provide a superior experience to the incumbent solution. 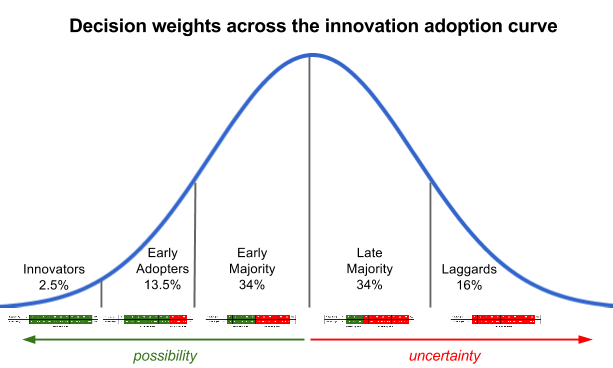 The green and red bars along the bottom of each segment indicate the different weights assigned to the same probabilities for each segment. For Innovators and Early Adopters, any possibility of an improvement in job-to-be-done satisfaction is overweighted significantly. At the right end, Laggards are hard-pressed to assign sufficient decision weights to anything but an absolutely certain probability of increased satisfaction.

Studies have shown that our preferences for risk-aversion and risk-seeking are at least somewhat genetically driven. My own experience also says that there can be variance in when you’re risk averse or not. It depends on the arena and your own experience in it. I believe each of us has a baseline of risk tolerance, and we vary from that baseline depending on circumstances.

The two factors – decision weights and probability of improved job-to-be-done satisfaction – work in tandem to determine how far the reach of a new innovation will go. Generally,

Let’s look at two innovations in the context of these factors.

Smartwatches have a cool factor. If you think of a long-term trend of progressively smaller computing devices – mainframes, minicomputers,  desktops, laptops, mobile devices – then the emergence of smartwatches is the logical next wave. Finally, it’s Dick Tracy time.

The challenge for the current generation of smartwatches is distinguishing themselves from the incumbent solution for people, smartphones. Not regular time wristwatches. But smartphones.  How much do smartwatches improve the jobs-to-be-done currently fulfilled by smartphones?

Some key jobs-to-be-done by smartphones today:

When you consider current smartphone functionality, what job tasks are under-satisfied? In a Twitter discussion about smartwatches, the most compelling proposition was that the watch makes it easier to see updates as soon as they happen. Eliminate the pain of taking your phone out of your pocket or purse. Better satisfaction of the task of knowing when, who and what for emails, texts, social updates, etc.

But improvement in this task comes at a cost. David Breger wrote that he had to stop wearing his smartwatch. Why? The updates pulled his eyes to his watch. Constantly. To the point where his conversational companions noticed, affecting their interactions. What had been an improvement came with its own cost. There are, of course, those people who bury their faces in their phones wherever they are. The smartwatch is a win for them.

If I were to ballpark the probability that a smartwatch will deliver improvement in its targeted jobs-to-be-done, I’d say it’s 20%. Still, that’s good enough for the Innovators segment. I imagine their decision weights look something like this:

The mere possibility of improvement drives these early tryers-of-new-things. It explains who was behind Pebble’s successful Kickstarter campaign. But the low probability of improving the targeted jobs-to-be-done dooms the smartwatch, as currently conceived, to the left side of the adoption curve.

Digital video recorders make television viewing easier. Much easier. Back when TiVo was the primary game in town, early adopters passionately described how incredible the DVR was. It was life-changing. I recall hearing the praise back then, and I admit I rolled my eyes at these loons.

Not so these days.

DVRs have become more commonplace. With good reason. They offer a number of features which improve  various aspects of the television viewing job-to-be-done:

But there are costs. If you’ve got a big investment in VCR tapes or DVDs, you want to play those. It does cost money to purchase a DVR plan. The storage of the DVR has a ceiling. You have to learn how to set up and work with a DVR. It becomes part of the room decor. What happens if the storage drive crashes?

My estimate is that the DVR has an 80% probability of being better than incumbent solutions. Indeed, this has been recognized in the market. A A recent survey estimates U.S. household adoption of DVRs at 44%. Basically, knocking on the door of the Late Majority. I imagine their decision weights look like this:

On the probability side of the ledger, they will need to experience DVRs themselves to understand its potential. For the Late Majority, this happens through experiencing an innovation through their Early Majority friends. They become aware of how much an innovation can improve their satisfaction.

On the decision weight, vendors must do the work of addressing the uncertainty that comes with the innovation. This means understanding the forces – allegiance to the incumbent solution, anxiety about the proposed solution – that must be overcome.

As you consider your product or service innovation, pay attention to these two factors. The first – jobs-to-be-done – is central to getting adoption of any thing. without the proper spade work there, you will be flying blind into the market. The second factor is our human psyche, and how we harbor hope (possibility) and fear (uncertainty). Because people are geared differently, you’ll need to construct strategies (communication channels, messaging, product enhancements) that pull people toward your idea, overcoming their natural risk aversion.