Innovation, done right, is an interactive flow of diverse contributions. For sure, it is a process of building on the knowledge, perspectives and heuristics of multiple people. It’s in this diversity where novel solutions emerge. But there’s another aspect to it. Think of innovation as a multi-act play. One in which distinct personalities enter the scene at key times. It’s these personalities, each with their unique contributions at the right time, that determine innovation success or failure.

Who are these personalities? There are four of them: 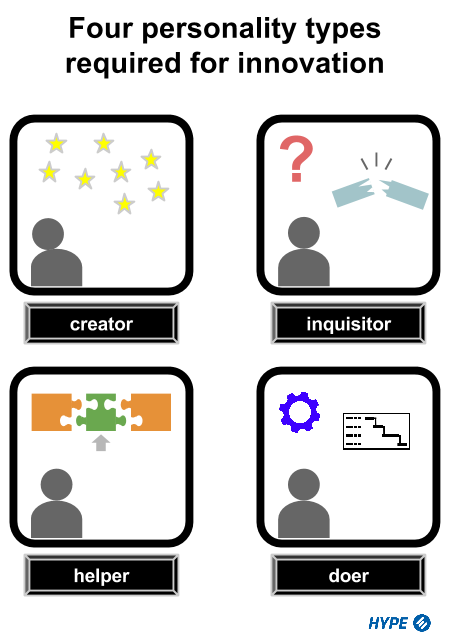 Experience shows that these are the personalities which are commonly seen in innovation communities. Their categorization is inspired by the work of Innovation Styles and Forrester Technographics. Let’s examine how each plays a role in the innovation flow.

Creators are the initial spark. They make a proposal to address some opportunity or need.

Creators come in two archetypes. The first is the “all ideas, all-the-time” sort of person. You may know someone like this. They’ve have bottomless interest in investigating new possibilities. They get excited about new technology or business model innovations. While good at providing a seemingly endless flow of concepts, these folks display little appetite for the details to see them through.

The second archetype is the person who has an idea for a specific question. This person is interested in solving a focused need rather than generally seeking what’s new. This is the more common archetype you’ll find in large-scale communities.

This personality is the most interesting one, as the nature of what this person does can elicit negative reactions: “innovation killer”, “stuck in the status quo”, “downer”. The truth is that the Inquisitor plays a vital role in improving innovation.

Inquisitor derives from the Latin quaerere, which means to ask, seek, look for. That is what Inquisitors do. They scrub an idea, they have a sense of the chain of steps required to make the idea successful, and seek what hindrances there are. It’s actually quite a service they provide.

Their questioning makes it clear what’s needed to advance an idea. Or, alternatively, they identify fatal flaws that make everyone realize the idea isn’t feasible. This is a valuable part of the innovation flow: removing detritus so resources are better applied elsewhere.

One note: don’t confuse Inquisitors with the dreaded corporate antibodies. Corporate antibodies are people who seek to kill an idea regardless of its potential. They have an agenda, and anything that threatens that agenda must be eliminated. The mark of an Inquisitor is one who looks at the details of an idea, and asks about those. Corporate antibodies will talk in terms of generic, unspecific attacks: “that’ll never work”, “we can’t do something like that”. Know the difference.

The Helper makes the connections that move an idea forward. Ideas with potential inevitably run up against obstacles. These include: missing expertise, changes required to existing processes, lack of a key resource, etc.

The Helper is a person who makes a connection. They see the issue, and recognize what is needed to overcome it. What do they connect? People. Knowledge. Another idea. A process. An external partner.

All of these elements are potential breakthroughs to carry an idea forward. The sheer variety of what constitutes ‘help’ means anybody can be a Helper. Each of us has different assets to offer, when required. And crowdsourcing is well-suited for integrating the Helper into the process because the needed help can come from anywhere.

The Doer is the critical transition from concept to innovation. Doers may sound similar to Helpers, but their contribution differs. They take an idea that has gone through an iterative series of improvements, and formulate the essentials for how to make it happen.

Make it happen: The path from digital concept to idea realization can take several forms. It may be a full-on project, ready to make impact quickly. Or it may go through a series of prototypes to get it right. Or a series of experiments may be run to validate aspects of it.

The Doer sees what’s needed, and understands how to move forward. While Helpers supply critical connections as crucial points in an idea’s life, the Doer coordinates multiple elements needed for the idea to be realized. Doers have an execution mindset, a desire to fill out the pieces to bring an idea to life. There’s a pride of craftsmanship for the Doer.

The contributions of each personality builds the idea’s journey, as illustrated below: 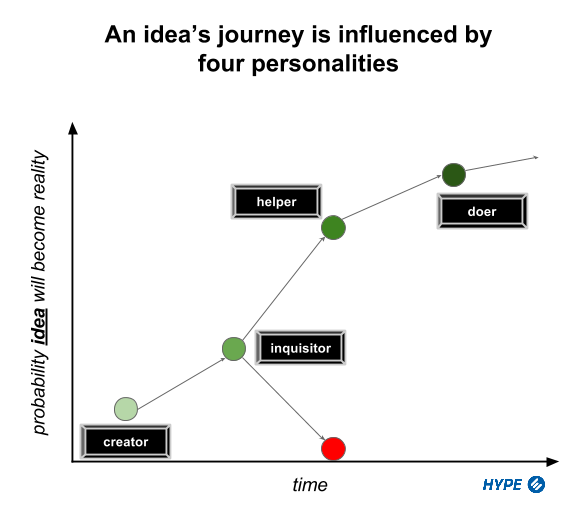 Each contribution increases the probability of the idea becoming reality.

Innovation is a multi-act play. It works best when everyone plays their part in full.