Browse: Home / Keys to success with an innovation reward program

Keys to success with an innovation reward program

Cash, gift cards, electronics, extravagant trips…these are the rewards that make people innovate, no? Tee them up, announce their availability and let innovative minds go to work.

When I say “rewards” and “innovation”, is that what springs to your mind? You’re not alone. It’s the default our minds run to. Maybe we’ve watched too many game shows. We’ve been conditioned to think of gaudy baubles of value as “rewards”. And I can’t tell you the number of times Daniel Pink’s name has been invoked as a response to any – I mean *any* – mention of rewards. My hunch is that people think of rewards as the caricature I’ve just described.

There is some truth in the response to rewards, of course. People have experienced ham-handed attempts to incentivize participation in innovation, collaboration, learning, knowledge sharing, etc. Which is why it’s worth laying out a better framework for understanding their use. Rewards are part of Valuables, one of the four categories of gamification. Gamification is powerful, when done right. When done wrong, as you’ll see, it can have the negative consequences.

Think of rewards as a spectrum of increasing levels of…let’s say…aspiration. They come in many flavors, but to simplify things, the ranking below is useful:

Cash, merchandise: The definition of rewards in popular culture. Extends to gift cards, trips to vacation hotspots, electronics and the like. Implemented as an “appeals-to-most-people” tactic. They are familiar items, and are the sorts of things one might find in a credit card rewards program. It’s hard to argue that cash, iPads, vacations aren’t broadly valued by people.

Workplace: These rewards are associated to privileges and extras in the work environment. Employee of the Month parking space. Extra personal time off (PTO). Lunch with a senior executive. Choice of a new office. They offer a bit of workplace status to the recipient. There’s a logic to this reward, as the innovation program is occurring at work. These rewards have a more narrow appeal than cash & merchandise, steering away from the cash value orientation.

Corporate values: Rewards that relate to the mission, the culture, the values of the organization. While these rewards can overlap the cash & merchandise type, they reflect the philosophy of the organization. A nice example of this is the reward program of Frima Studio, a video game maker. Employees earn points for ideas, which can be redeemed for babysitting services, home repair, etc. These reflect the company’s emphasis on work-family balance. Others examples could be: (i) corporate donations to selected charities; (ii) opportunity to help determine the company’s collaboration strategy; (iii) week-long trip for a course on a career-enhancing subject.

Innovation program: Rewards here are aligned with the objectives of innovation in the organization. One example is the use of innovation tournaments for money to find Big Ideas. The reward is the funding of the program, and even a chance to work on the subsequent project to make it reality. Another example would be a design thinking workshop to prototype and develop the idea. Top performers could become part of special internal group with broader innovation duties for the organization.

As you read these, notice the escalating level of aspiration and mission in the types of rewards. Clearly, rewards are a richer field than the stereotypes we always default to.

Some winning employees in an internal contest got a chance to spin a prize wheel. One of the prizes was lunch with the CEO. For a couple employees, this is the prize that came up on the wheel. Lucky day for them? Not so much. They immediately asked for a re-spin. The idea of sitting through lunch with a powerful executive of the company was more a source of fear than interest. It also promised plenty of awkward conversational moments.

This story illustrates the point that a given reward will not appeal to all people. Which is a core principle to remember for planning any type of rewards program. To help flesh out the basis of interest for different types of rewards, think in terms of this matrix: 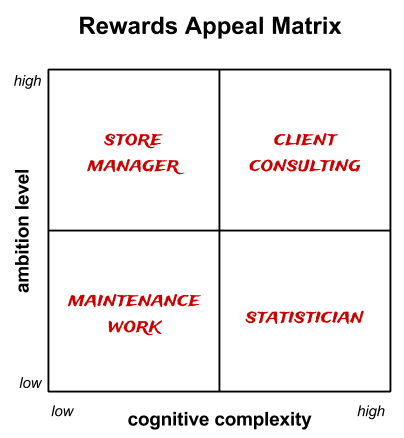 OK, an explanation of the two attributes.

Cognitive complexity: Work that is cognitively complex will involve high levels of creativity, knowledge accumulation and/or analysis. Tasks tend to be unique on a day-to-day basis, with fewer rules to follow to be successful. A terrific survey that examined this sort of work was completed by The Work Foundation (pdf link). Work that is not cognitively complex can be described as following generally well-known rules. The level of uncertainty when approaching a new task is lower.

Ambition level: Ambition in this context relates to the desire for ever-increasing responsibilities that have greater impact on an organization’s performance. How strong is the ambition a person has? Certain occupations will attract people with larger ambitions.

Now, how do these attributes relate to rewards? In combination, cognitive complexity and level of ambition are useful for determining what sort of rewards would hold appeal. If you’re satisfied with work that follows well-known guidelines, rewards that allow you to gain new knowledge are less interesting. If your objective is a basic paycheck and a great life outside the office, opportunities to pitch the CEO may not hold as much appeal. If your interests run toward ways to expand your career options, a $25 Amazon gift card doesn’t get your pulse racing.

Rewards done right will cause an uptick in participation and the outcomes you seek. Rewards done poorly will…well read these two examples:

A large corporation ran an innovation context where participants were able to earn points for voting, commenting and posting ideas. These points could be redeemed for a limited number of Amazon gift cards. What happened is instructive: a number of employees fell over themsleves trying to earn their points as fast as possible to qualify for one of the limited set of gift cards. Result: lots and lots of low quality contributions. A pain for the innovation team and business sponsor to wade through.

Another company promised that the submitter of the winning idea in an employee idea jam would be given a car. Of course, there were plenty of ideas, and they did end up selecting a relatively weak idea as the winner. The employee received the car, but the company didn’t do much with the winning idea. The following year, the innovation team wanted to again award a new car to the winning idea. Senior management said ‘no’, based on the prior year experience. Result: the second jam had no big prize, and employee participation dropped precipitously.

Both are examples of the cash/merchandise type of reward. And the reward strategy was done poorly. These examples do support the attitude I referenced at the start of this post. People invoke Daniel Pink – rightly – in reaction to badly done rewards programs. Three factors to consider in setting rewards:

Reward programs can be fun and enticing for your innovation community. Go beyond the stereotypes of cash and merchandise for simple activity or for participating at all. Make rewards something that work for participants and for organizational innovation goals.