Browse: Home / Avoid these 3 mistakes when asking for employee ideas

Avoid these 3 mistakes when asking for employee ideas

Global advisory and research firm Ovum recently forecast 8% annual growth over the next five years for innovation management. Strong momentum, as organizations awake to the cognitive surplus their employees possess.

Sadly, some companies launching employee innovation programs will inevitably find the going tough. They’ll launch their innovation initiative with great fanfare. They’ll give themselves the powerful advantage of using a campaign-based innovation approach. But will be disappointed when the employee ideas they see fail to drive the value they were seeking.

Why? As philosopher John Dewey noted:

A problem well put is half-solved.

The mistake a number of these organizations will run into is that the problem they’re trying to solve is not well put. Not the grammar of the question, but the fundamentals of what is asked, and how it is asked. With the predictable downstream effects of less-than-adequate ideas.

With that in mind, let’s look at three mistakes that mean a problem has not been well-put from employees’ perspective. Understand these mistakes, and you’re closer to uncovering the novel, high potential ideas you’re seeking.

Casting a question to a community is a wonderful form of engagement. You’ve got the attention of many people. You’re going to receive an interesting mix of responses. A great way to crack open a tough problem.

But hey, since you’ve got their attention, maybe they can provide some answers for some additional areas. That way you don’t have to ask later. This is The Overask. Below is a modified version of an actual question that was asked of employees:

Revenue. Operational efficiency. Bureaucracy. Margins. All in one question. It even includes “etc”, which is essentially asking for everything but… 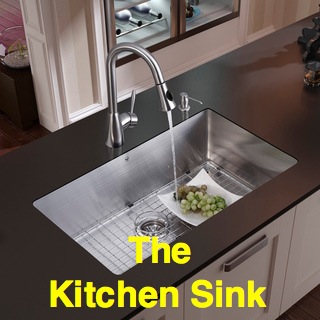 This is a textbook case of the overask. Issues that arise with this question:

Mistake #2: Too specific! Not specific enough!

In asking a question, be mindful of the responses you’re seeking. At the outset, expectations for a given campaign look something like this: 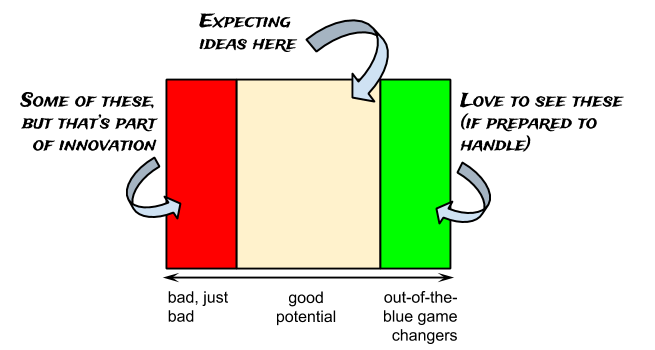 Those are the expectations, but then there’s the reality. The degree of specificity in the question will affect the width of those outcomes. In other words, the way you ask the campaign question impacts the shape of the ideas you will see.

There are times when a very specific sort of idea is needed. For example, you’d ask a question such as: How can we reduce the amount of fuel used by our trucking fleet while they’re dropping off and picking up goods at our warehouses? The effect of that is to narrow the range of outcomes in questions due to its specificity.

On the other hand, it’s possible to ask a question that can elicit a wide range of responses. This is not the Overask, where too many topics are asked at once. Rather, it’s focused on a topic but with a deliberate vagueness to open the aperture for ideas. For instance, one could ask: How can we change our distribution processes to better deliver goods? The effect is to expand the range of ideas submitted. Because of the blue sky thinking that comes with asking such a wide-open question, the outcomes expand.

You can depict these effects as follows:

The mistake organizations can make is to have a mismatch in expectations. You were expecting workable ideas with good, positive potential, but you got a whole heap of crazy ideas that don’t match expectations. And you weren’t ready to handle some of the out-there ideas that could be game-changers.

Or you were seeking a range of ideas that reflected some blue-sky thinking. But you were so specific in your question that people didn’t realize that was expected. You’re surprised at the pedestrian nature of the ideas.

Match the ‘ask’ with what you’re ready for.

When asking employees for ideas, it matters who is making the request. Why? Because employees will make an instant judgment about the legitimacy of the campaign based on who sends the email.

Take a look at the two emails below. They each announce the same innovation campaign. But note the difference in senders: 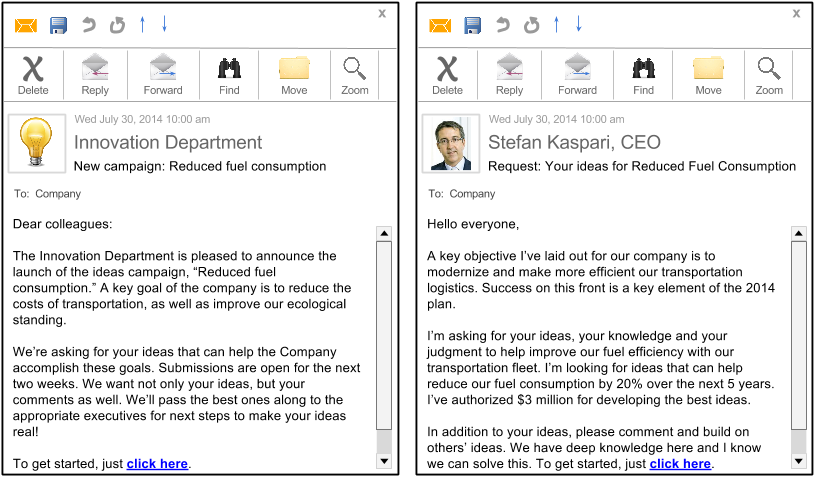 On the left, the email makes the effort appear to be an out-of-the-mainstream project. By a group that people don’t really know well. And given the group’s position, the best it can do is forward the ideas to relevant executives for their consideration. Why would an employee spend time investing effort in this campaign?

The email on the right comes from a senior executive that employees know. This executive speaks with authority, and everyone understands that the effort is real. He is able to state the sort of ideas being seeked, and back the effort up with a real plan for action. Both the executive’s presence and the specifics for how ideas will be considered and developed significantly increase the legitimacy of the effort. It will be worth employees’ time to participate.

Avoid the mistake of not considering ‘Who’ is sending the email, and the effect that will have on participation.