Browse: Home / What to Do If Your Business Decelerates

What to Do If Your Business Decelerates 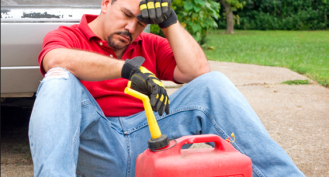 A little while back, I did what turned out to be a very popular piece:  If You Do Sell [Your Company] — Do it a Local Maximum.

A wise friend of mine commented on it afterwards.   “You’re absolutely right.  Selling your company at a non-local maximum is incredibly frustrating.  But you know what’s 100x worse?  Decelerating.  Once a SaaS business decelerates, it becomes almost hopeless.  No one will buy you, fund you, or join you.”

The real truth, deceleration, it happens to all of us.  At least at some small scale.  At least for a few quarters.  I wrote a piece some time ago here, a person favorite, about Our Year of Hell.  When a bad hire at a key time, and some confusion on strategy, led us to our worst year ever on a Year-over-Year growth rate basis.  More on that here.

So what do you do, if you decelerate?  For us, it was a “simple” matter of bringing in a great VP of Sales.  It cured our problems in 60 days.  More on that here.  But why did it solve our problems?  Because as rough as that year was, as terrible as it was (and I seriously thought about bringing in someone else to carry the burden) … it turned out we still had the leads.  People were still coming by to the Open House.  They just weren’t buying at the prior rate.

And so what I learned, and what I’ve helped other founders with since, is that at least 8 times out of 10, if you decelerate post Initial Traction … if you act quick enough … you can Reignite Growth.  It’s true.

Let’s analyze the problems that cause deceleration and what you can do about them.

Problem #1:  “I’ve tapped out my market.”  Answer:  Of course you have.  Everyone has and does.  You think Salesforce, now closing nine figure deals, is really selling to the same SFA-for-SMBs market it started with?  Of course not.  NetSuite also grew upmarket in a similar way.  At EchoSign, we started with a freemium model, but went upmarket.  Today, the entire freemium market for e-signatures is probably still < $20m ARR.  Not enough for the players to make it.  Box turned into the enterprise content management of choice for the CIO’s office.  Sure didn’t start there.  So everyone has to redefine their markets.  How do you do this?

Problem #2:  “The Competition is Killing Us.”  Of course it is.  At least some times.  That’s competition.  More SaaS markets aren’t natural monopolies.  They’re natural oligopolies.  (More on why here).  And in oligopolies — we see brutal competition, on just about everything, except sometimes pricing.

What do you?   My top tips if the competition really is killing you, more than last year:

Problem #3:  “My Team Isn’t Good Enough and I Can’t Attract the Great Ones To Join Me.”  Yes, this is a real problem.  And boo-hoo you aren’t Dropbox-cool.  Time to suck it up and spend at least 25% of your time scouring the earth for great hires.  Look, someone out there that is better than your suboptimal VP of Sales / VP of Marketing / VP of Engineering / VP of Whatever — that actually does need a job.  If you’re accelerating, take your time here on these hires.  But if you’re decelerating — any upgrade will make a difference.  So make one.  Deceleration is the time when a Good Plan Today is Better than a Perfect Plan Tomorrow is especially true in hiring.  If your VP of Engineering doesn’t want to build features for your big customers, or can’t hire … just find someone 50% better.  That’s enough.  And make the hire.  On the spot.  And given them whatever it takes, equity, cash, it doesn’t matter.  You have to reignite growth.  Make it So.

Deceleration happens to all of us.  I could tell you the story of several CEOs of multi-billion dollar SaaS companies that lost faith and desperately tried to sell themselves at tough times.   When things decelerated.

Look at the chart below from Tom Tunguz nicely charting Hubspot’s revenues.  They’re about to IPO at a billion+ valuation.  And it looks like they had their own deceleration year.  And then rebounded incredibly the next year.  In fact, after their deceleration … they accelerated faster than the average SaaS company to IPO.  Awesome. 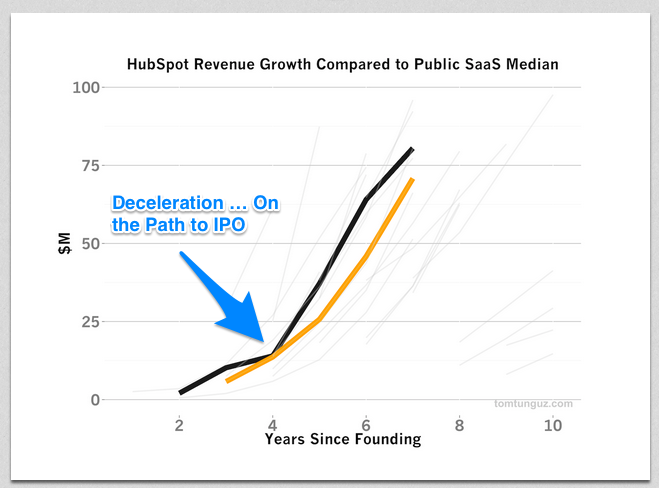 It has happened to all of us.  And you can’t turn around a tanker in 1/10th of a mile.  You can’t change everything overnight.  You can’t reignite growth in 30 days.  You just can’t.
The key is to Act Now though.  Now.  Make the one great hire (like I did).  Focus on your relative competitive advantages, and double down there.  Find future growth through your outliers.  Start today.  Don’t screw around.

What won’t work is Inaction.  There is no place for Ostrich behavior in SaaS.  Get off Twitter.  In fact, get off this blog.  And do something right now, today, that can help at least a smidge.  As horrible as it is, you can survive if you decelerate for just a few quarters.  You can rebound, as long as the leads are there, as long as the prospects at least come by, even if they don’t buy.  But, if you decelerate for 15-18 months straight … you’ll be dead in the water.