Browse: Home / All you need to know about Chatter –Salesforce.com’s Collaboration Cloud

All you need to know about Chatter –Salesforce.com’s Collaboration Cloud

I’ve had two experiences with Marc Benioff. One positive and one less so.  The positive experience dealt with Marc taking a direct role in helping a friend of mine find a job within Salesforce.  Marc didn’t have to but he did it because he cares about hiring great people.

The second experience was in the summer of 2003 during a Terminator 3 premier in San Francisco.  One of my friends was a personal advisor to Arnold Schwarzenegger and was having trouble with a young hot shot dot com CEO being too aggressive with Schwarzenegger.  He didn’t like the CEO’s aggressive nature towards Schwarzenegger, and thought him out of line.

My thoughts? The CEO seized opportunity and went after it.  That CEO was of course Marc Benioff.  I remember him a man with an expression so certain of the success of his quest that he could afford to be assertive.  And today he’s attempting to seize a large share of the Enterprise 2.0 space.  Undoubtedly, he and his company will be a contender.

Scott Holden Director, Product Marketing at Salesforce.com and I recently had a discussion about their upcoming release. According to Holden, Chatter is a real time central command center for all of your business feeds.

It’s also their first true enterprise product.   Yet at first it will only be released to current Salesforce.com users for free.  Most of which are in sales.  According to Holden, an Enterprise version will be released for the rest of the organization sometime in late 2010 or early 2011.

My first impressions are that Chatter is closer to a Facebook for the enterprise. But instead of pesky 3rd party apps pinging you with the latest criminal your friend has knocked off, Chatter will alert you to significant business concerns that have changed. And if they can get ERP and MRP systems to talk to the company through Chatter, they’ll break out of the sales department and into the rest of the organization. 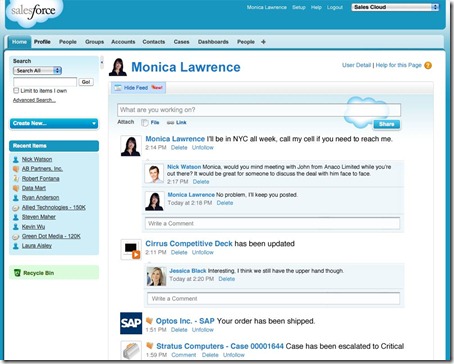 The Killer Use Case

Chatter’s most compelling potential is in connecting an organization’s employees to customers and prospective customers.  Imagine a scenario where as you’re updating your status about visiting a new sales prospect next week, an individual in manufacturing pings you with a “I went to college with so and so and I will make a warm introduction.”  Holden claims that’s happening three or four times a week at Salesforce.com (they are using Chatter internally now). 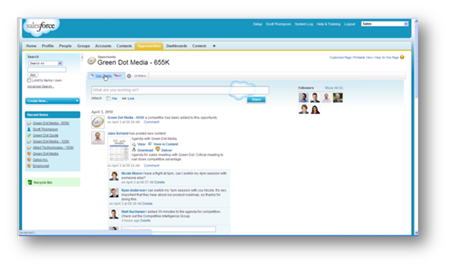 Will Chatter work with mobile phones? 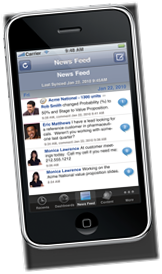 According to Holden, Chatter will work on mobile and for no extra charge.  For sales teams and executives that travel a lot, the ability to see and interact with your Chatter feed from a mobile device is a powerful benefit.

Envision a scenario where a salesman is making a sales call with a prospect and needs to answer a technical question.  A quick status update with the question may get an instant response from several followers of his stream.  Others may even add to the discussion by arming the salesperson with additional questions to ask.  In effect, making the salesperson more valuable to his prospect in real time.

The Future of Chatter

Similar to my conclusions on an earlier post of Yammer, Chatter will need to provide advanced filtering to tune into the conversations that are important to you.  According to Holden, the next release of Chatter will have these filters.

Unlike Yammer, Chatter doesn’t want to replace email –but  only replace the ‘reply all’ button.  Their stated goal is to reduce corporate silos by broadcasting information and allowing employees to tune into their interests via filters.

Holden claims Chatter will leverage the same robust analytics engine powering Salesforce.com.  Holden did not elaborate further, but I can imagine companies overtly or covertly being able to monitor conversations.  This can be both positive and negative depending on your point of view.

For me it’s a positive.  All of the solutions like Chatter will need to provide better analytics and reporting in order to leverage the collective wisdom of the organization.  Companies will want to benefit from the conversations taking place and zero in on areas where they can capitalize.  For instance, if you were able to see that a new competitor was being mentioned frequently, your marketing and sales team could take action in order from being blind-sided.

What else do you need to know about Chatter?

What Corporate Champions need to know

Chatter is going to be a significant addition to the Enterpris
e 2.0 space.  There is some overlap with Jive Software, Lithium, SocialCast and Yammer so if you have those solutions already and want to test Chatter, then plan accordingly.

Then, if you are a Salesforce.com customer then you should pilot Chatter with your current base of users.  If you derive measurable value, then consider going enterprise-wide when Enterprise Chatter is released.  If not, remember Metcalf’s law and consider whether your organization will derive more value by involving more employees.

If you are not currently a Salesforce.com customer, and your organization is not Enterprise 2.0 evolved, then consider waiting until you can point to some early successes in your industry.  Recognize that this approach is a follower model, but is a safer, more well traveled road.

If you are not currently a Salesforce.com customer and your organization is ready for a solution like Chatter, then wait for the Enterprise Chatter edition and pilot it.  Try it within Sales, Marketing and your Executive team first, then if successful roll it out to the rest of the organization.  Again, these types of solutions carry a lot of risk (especially when cloud based), but if you have the political capital to spend, then spend it.

The future is now as they say, and you need to make yours.

4 responses to “All you need to know about Chatter –Salesforce.com’s Collaboration Cloud”