You’re awash in ideas. Ideally from running targeted campaigns, but you may be seeing them from other quarters as well. Great, then what? A key activity in the process of innovation is determining which of many ideas are worth further investigation and development. In the evaluation of ideas, I’ve seen some common tests:

These are understandable evaluation criteria, right? Good and appropriate at the right time and for the right innovations. But they’re not the most important ones. Every idea, to be successful, must pass three jobs-to-be-done tests. What are jobs-to-be-done? Professor Levitt’s quote at the top of this article offers a succinct definition. I also offer a more mechanical construction of the concept:

A job-to-be-done is something we want to accomplish. It consists of individual tasks and our expectation for each of those tasks. We rate the fulfillment of the expectations to determine how satisfied we are with a given job-to-be-done.

Is “jobs-to-be-done” essentially a fancy term for customer needs or pain points? No. It’s a more encompassing concept. It does include those things, but its larger sensibility rests on objectives we want to accomplish. When I’m playing Angry Birds or 2048 during some down time, am I fulfilling a need? It’s more of a desire to occupy myself while I wait.

Every idea must address a job-to-be-done to become an innovation.

It’s an intuitive observation that ideas only become innovations if they help customers fulfill a job-to-be-done. Yet, it seems difficult to apply in practice. Research has shown that only 1 out of 9 ideas that go into significant development become commercial successes. If everyone understood the requirements of jobs-to-be-done, shouldn’t that ratio be better?

Three job-to-be-done tests for an idea

There are three facets to evaluating an idea in the jobs-to-be-done context:

These three tests are a decision tree: 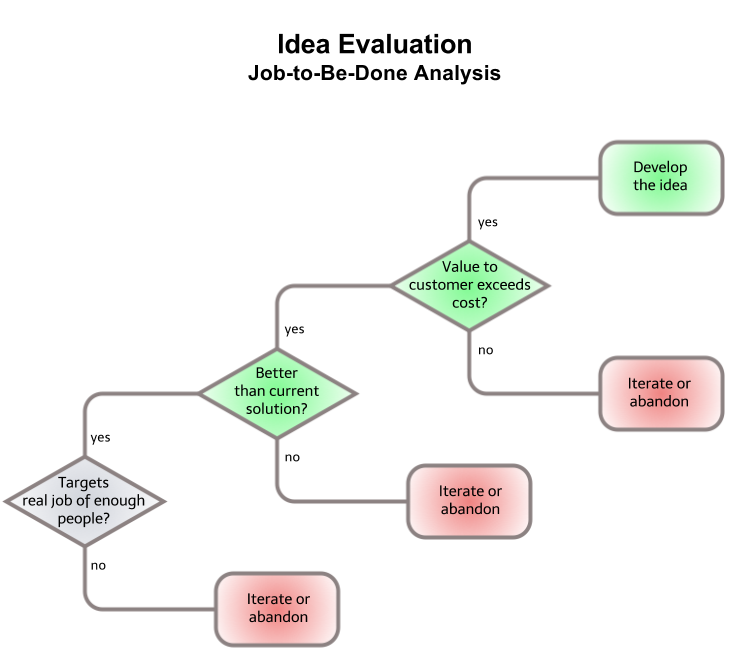 Individually, each test provides a rich vein of analysis to understand potential innovations. Taken together, they  identify ideas that have the highest potential for success with intended beneficiaries.

This is the opening acid test of an idea. Does it address an actual job people have? In some ways, this should be the easiest test to pass. First, let’s look at people’s sources of ideas: 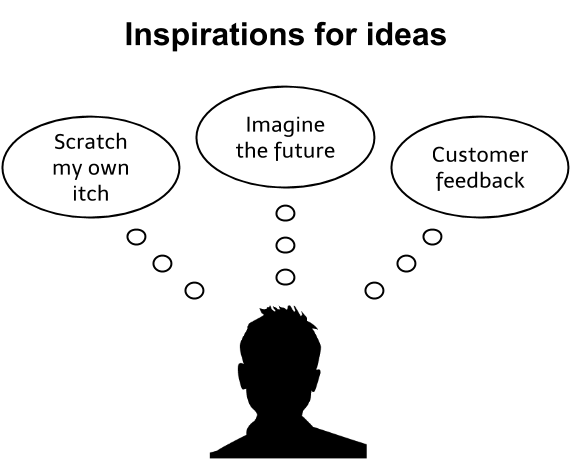 Two of those are related to jobs that people actually have (my own itch; the intended beneficiaries). The other source – imagining the future – is more speculative. My impression is that it’s the inspiration that people commonly associate with Innovation. While they are more speculative, I’d say that even “imagining the future” ideas are grounded in some legitimate job-to-be-done.

But not all are. Here’s an example of an idea that didn’t actually address a true job-to-be-done. A serial entrepreneur

launched Color, an app that would share your pictures with any stranger within 100 feet of your location. Color received $41 million in funding from some the most savvy venture capitalists out there (e.g. Sequoia Capital). It was a new way to use the hot trends of SOcial LOcation MObile (SoLoMo). But stop and consider what it actually offered: sharing pictures…with strangers…within a 100 foot radius. How many people have that job-to-be-done? Try to think of current cases where you’re sharing things with strangers nearby. Another job-to-be-done Color targeted: creating a visual composite of a particular location through shared images. Sounds cool, right? Again, consider how often you have that job.

Unsurprisingly, fate was not kind to Color. The company is no more.

Which leads to the second part of this test. Is it a job-to-be-done held by enough people? Think of this as rough market sizing. Evaluate how many people have the job-to-be-done. In the early stages of evaluation, this is a t-shirt sizing exercise (small, medium, large). Enough will be relative to the market. If your market is luxury, far fewer people are needed than for an idea targeting low cost mass market.

#2: Idea is better than current solution

After you’ve determining the idea targets an actual job-to-be-done for enough people, the next test: Is the idea better than what people are using today? And not just somewhat better, butmeaningfully better.

Harvard professor John Gourville relayed this finding about the adoption of innovations:

According to behavioral economist Richard Thaler, consumers value what they own, but may have to give up, much more than they value what they don’t own but could obtain. Thaler called that bias the “endowment effect.”

To get this customer to switch from her incumbent solution, the new innovation will need to significantly enhance her outcomes. Normally, outcomes for a product can be somewhat abstract. However, by thinking in terms of what the customer is seeking to accomplish, not features that are used, the analysis is made easier.

Waze is a mobile driving directions app. Which certainly addresses a common job-to-be-done: driving from one place to another. Providing directions is something that paper maps, AAA and Garmin have provided for years in the U.S. But Waze offered a significant improvement over traditional directions solutions, and even the more recent editions from Google and Apple:

When you think about your job-to-be-done – moving from point A to point B quickly, without incidents – Waze fulfills that job and the desired outcomes significantly better than existing solutions. Unsurprisingly, Google purchased Waze for more than $1 billion.

When analyzing an idea, you should have a clear and unambiguous understanding for why it’s superior to current solutions. Not in terms of feature comparisons. But in terms of delivering on the outcomes that matter for the job-to-be-done.

#3: Value to customer exceeds its cost

Read this final test closely. At first glance, you might mistake it for evaluating your company’s costs to produce the innovation. But it’s not – such an analysis is done separately in the idea evaluation process. This third job-to-be-done test requires you to step into your customer’s shoes.

Cost is more than just cash paid. It encompasses a range of factors for the customer:

Cash outlays: Obviously, any  new cash the customer must spend for the innovation is a cost.

Loss of previous functionality: The new innovation may not include a function/service that customers had become accustomed to. Giving that up is a cost in their eyes.

New unwanted behaviors: With a new solution, it’s reasonable to expect new behaviors to emerge. People reacting naturally to the new features/services that are available. But over time, these behaviors may actually become a cost for the customer.

The Pebble Watch is a good example of this. Pebble’s smartwatch provides an ongoing series of notifications about emails, 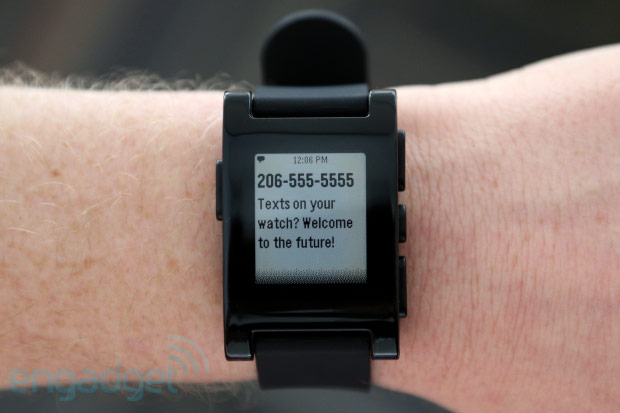 tweets, Facebook notifications, texts, etc. It passes Test #1, as it addresses a job-to-be-done (be aware of new items of interest). It’s debateable whether it passes Test #2, where the incumbent solution is the mobile phone. Let’s assume for some segment of people, instant awareness is vital. But there’s a downside to this new functionality. LinkedIn product manager David Breger wrotethat the easy access to constant updates on his watch became a significant distraction:

Because, as much as I was rudely checking my phone before, I was checking my watch even more! Now of course, I know you can turn on and off certain notifications, but to me the whole point of getting the Pebble was to scan notifications quickly and then triage appropriately.

But what I learned was that people DO notice you checking your watch. It ends up being almost as obtrusive as pulling out your phone.

Put yourself in similar shoes. Imagine looking at your watch with every new notification, while trying to engage someone in real life. It would undermine your interactions. This is a cost that customers would have to bear.

Connecting solution to existing infrastructure: Swapping one solution for another may require new connections to other infrastructure and routines. That’s a switching cost.

This third test is the one that is hardest to gauge. Because costs are not as explicit as you’d expect. It takes walking in the customer’s shoes.

Importance of experiments and iterations

While the three tests are presented in yes/no format, it’s useful to consider them in terms of degrees of certainty:

In the evaluation of an idea, you’re looking to have a good degree of certainty across the three tests. If you’re not comfortable that you can empirically tally a ‘yes’ with high confidence, a smart approach is to design experiments to test the idea. Disciplines such as design thinking become important here.

The key is to identify points of uncertainty and to resolve them head-on. When you see the evaluation of ideas framed in terms of degrees of certainty, the recurring argument over incremental/sustaining/disruptive/radical innovation transforms into a discussion on levels of certainty. Answers come through experimentation, iteration and idea-killing commensurate with the level of uncertainty.

Job-to-be-done analysis answers the question on corporate innovators’ minds: Do you know when an idea will be successful?