Browse: Home / If You’re Going to Do a SaaS Start-Up … You Have to Give it 24 Months

It seems like everyone wants to be a SaaS founder these days.  I meet with great VPs of Sales and Product in particular who are Ready.  It’s time.  To go out on their own.  Start their own SaaS company.

I get it.  I’d like to recruit you to be a VP at one of my companies, but I get it.  No one ambitious wants to work for The Man.  I mean, not really.

But should you?  There are three things I ask folks who want to start their own SaaS company:

Maybe an Instagram or a WhatsApp or a Pinterest or a Meerkat can explode in just 12 months.  That just doesn’t happen in paid SaaS apps.

>> Can you “afford” to commit for 24 months just to get to Something, to real Initial Traction?  If not, you should pass. 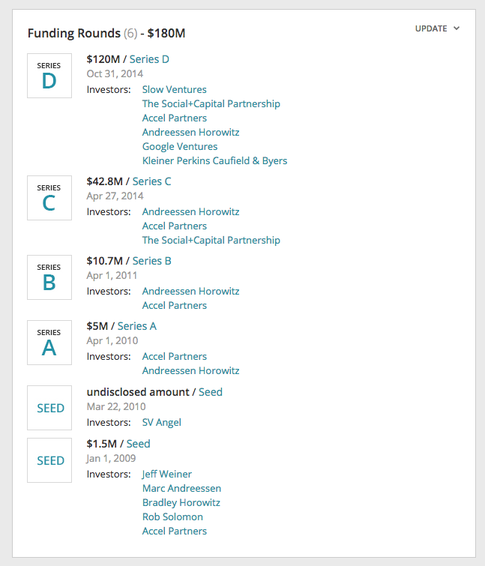 Slack went from $0 to $12m ARR in ’14.  Woah.   But it wasn’t founded on 1/1/14.  It took them a year to get to a Minimum Sellable Product.  And it was really founded as a company many years earlier, see the Crunchbase chart to the right:

In any event, giving yourself 12 months to get to Initial Traction just won’t cut it.  You’ll quit.  Because you won’t have enough revenue just 12 months in … if you have any.

And the honest truth is most folks can’t really commit for 24 months.  For financial, or personal, or whatever reasons.  That makes sense.  But you’ll fail in SaaS if you don’t commit to 24 months to Initial Traction.

But can you really, honestly, commit to obsessively thinking, worrying, futzing, stressing about how to do The Impossible.  Every.  Single.  Moment of the day.

Nothing else, but work.  Even when you are playing with the kids.  Having dinner with your husband.  Because that’s what it’s going to take.

>> If you don’t have the mental bandwidth — you should pass.  Because everything in SaaS is just insanely competitive.  And also because SaaS is so multi-faceted.  You’re going to have to be the VP of Sales, Customer Success, Marketing and probably Product in the early days.  There’s endless drama with paying customers.  You’ll almost lost your Best Logo Accounts.  You have to be intensely, painfully committed to do all this.

Later, there will be fat, once you get to $5m ARR or so.  The cavalry will come.  More on that here.  But in SaaS, it takes a long time until then.  Because it’s just so hard to get recurring revenue engines going.

3.  You have to have Zero Optionality. This is perhaps most important.  If you maintain optionality, it never works.  “I’ll try for a while and go back to Salesforce if it doesn’t work.”  or  “I’ll do a lot of consulting while I see if it works.”  or “I’ll raise $500k and see how it works.”

This just never works.  Not for high-growth start-ups at least.  Great founders maintain Zero Optionality.  Not because they are crazy risk takers.  But because they just doesn’t see the risk.  They have no back-up plans.  They see The Future.

If you need to maintain optionality — you aren’t ready to do your own SaaS startup.

Then take a pause.  But don’t say no yet.  Instead, go do some more homework.  Do 20 customer interviews (more on that here).  Find a great co-founder that also can commit for 7-10 years overall, and for 24+ months to get to Initial Traction.  Because he or she has to pass tests 1, 2, and 3 above.  You almost certainly can’t do it alone.  And see how it feels after that.

Because again, the great founders can see The Future.  But sometimes they need a little help to get there.  I did, in both my start-ups.  20 interviews and a just amazing co-founder can be the missing pieces, to show you how to really do your own SaaS start-up.

Going back to one of our Dreamforce presentations, look at Guidespark and Talkdesk.  Both are on their way to being Unicorns.  But man, both took far longer than 24 months to get to Initial Traction.  But now, they’re killing it.  Can that be you?