It’s time to do a series of posts on SaaSt to sort of … kick your arse a bit.  What I mean by that, is that no matter how well you are doing post-Initial Traction in SaaS … you can almost always do at least 10-15% better.  Pretty much almost always.  Because there’s almost always more you can optimize, if nothing else.  I’m not saying it’s easy.  It’s hard to get that last bit of growth out of the engine.  But it almost always can be done if you force yourself to work even that much smarter and harder.

And SaaS is tiring.  There’s always some customer drama, some seemingly critical feature gap, some operations challenge, and the war for talent is endless.  So it’s hard to dig even deeper inside yourself to get that last 10-15% of additional, much-harder-to-achieve revenue out of the ether.

So I want to help.  I want to challenge you to do Even Better in a series of posts.  Because in recurring revenue, growing 10-15-20%+ more this year than even your stretch plan will pay huge dividends 3-4 years down the round.  Because SaaS compounds.

First up, Salesforce.com asked me to write 5 ideas on the topic.  They recently published them here, and I’m republishing below.

Recurring revenue businesses have pros and cons. One of the biggest cons is it’s just so hard to get to that first million in revenue. If you charge, say, $10 a month for your SaaS product, then just to get to $1 million in ARR (annual recurring revenues) … you need 8,000 paying customers! 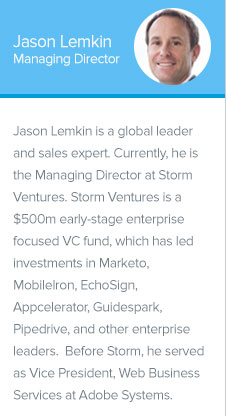 But once you finally get that engine going, it does get easier. Not only do the customers renew for the next year; they generally buy even more if you do right by them. And so once you get to even $3-$4 million in SaaS revenues, you pretty much become Unkillable, Unstoppable. If you do even just $3 million in SaaS revenues in ‘15, the only question is if you do $4m or $6m or $10m in ‘16. Because the vast majority of that ‘15 revenue is going to recur.

And what that means is, at least sometimes, a small amount of complacency can set in once you hit Initial Traction. Isn’t 60% growth, or 80%, or 120% enough for this year? I mean, that’s still great, isn’t it?

Yes, of course that’s great. But because recurring revenue is so predictable once you get a few million in ARR under your belt, I want to give you a bit of a kick in the rear — and challenge you to do even better than your 2015 stretch plan.

Because you can. Yes, in fact, everyone can.

If you caught our Salesforce Live discussion with Parker Conrad of Zenefits a little while back, you heard the amazing story of a CEO and founder that in 2014 went from less than $1 million in ARR to more than $20 million, and from 1 to 100 sales team members. (Watch the video here.)

But the best part of the story isn’t that. It’s that less than halfway through an amazing year of trying to do the amazing — to go from $1 million to $10 million in 12 months — Parker doubled the plan from $10 million to $20 million. You can hear the story here.

But we all can do better than our current plans in SaaS. Here are 5 things you can do that will tilt your growth rate at least a bit higher:

1. Increase the MQL (Marketing Qualified Lead) plan by 20%. And find a way to fund it.

I hope you have a plan for MQLs (or whatever lead metric you use) this year. Maybe your plan is to grow your MQLs 120% so that you can grow your revenues 100%. Take a pause, and ask your VP of Marketing to do 20% better than that. And find a way to get her the capital. If you have a good sales team, more leads will drive more revenue, period. Don’t hesitate. Have the confidence to spend that incremental capital — if your head of marketing is good.

2. Put your Customer Success Team on an upsell quota — with variable comp.

Most customer success teams are run and built on a “best efforts” basis. Their job is to keep the customers, to try to create net negative churn. That’s great, but put the team on a net revenue quota — and give them at least 20% or more variable comp if they hit and exceed that quota. Magic happens when you provide the right economic incentives. Everyone works harder, and you see real results — not excuses. You’re not going to grow your existing accounts as much as you could if your customer success team is merely paid on a best-efforts basis.

Nick Mehta of Gainsight made this point well, as a key learning from his first SaaS company to his second. If you don’t constantly hire reps, you’ll never grow the top line as fast as you could. You need to Always Be Hiring Sales Reps. Once you have an engine going, have faith. Have faith they’ll generate and close the leads. And they will — if they’re great. If your sales team is understaffed, you’ll leave money on the table. A little overstaffed is better. Do that, and you’ve got a chance to exceed your current plan.

4. Give your team whatever “air cover” it needs. Period. Now.

Your sales team needs help. They need to specialize. Your closers need to be closers. Your head of sales shouldn’t be doing marketing, or customer success, or anything else but sales. So if you don’t have a great VP of Marketing, hire one. If your prospects haven’t heard enough about your company, get on the road. Buy a billboard. Get better PR. Do more retargeting, more campaigns, more joint marketing. Build deeper partnerships. Do it all, or as much as you can, to give your team air cover. They’ll close more deals this way, and they’ll beat your plan. They need it. Are you doing the very best possible here? No. No one is. That’s why even Parker Conrad of Zenefits was on Salesforce Live, even with that amazing 2014.

Because he knew he could do even better by getting the word out even more, by providing more air cover.

5. Top whomever needs to be topped. Stop underhiring.

Most first-time CEOs (and many second-timers) like to hire up-and-comers, not veterans. That’s a great strategy. But sometimes, those early hires just don’t scale — at least, not forever. I know you want to give them more time, more room to grow. You should. But if the time has come to top them with a boss — a “real” VP of Sales, a CMO, a seasoned VP of Customer Success — do it. Now. You’re not doing the business, or them, any favors by letting them stay in the top role longer than they can own it. If your head of sales can’t manage a larger sales team, you need to get a real VP of Sales in place right now. Wait … and you’re leaving money on the table. Get the timing right here, and you can grow far faster in 2015.

Try some of these initiatives. Each really will simply help you optimize the engine you already have. Make one piece of your business just 10-20% better… well, in SaaS, that can have a profound effect.

And as a CEO, challenge yourself. Get on a jet. Take that extra candidate meeting. Find that extra capital. Do whatever it takes to grow 20% faster than you would have this year. It won’t make a difference this month or next. But it will pay off in spades when you get to $100 million 20% faster, with less stress — and more success.