Wow, talk about luck, apparently I caught a discount that barely existed for hours.  I’ve long waited for a decent smartphone available @ Verizon, be it the iPhone, Nexus One or whatever else … so raving reviews of the HTC Incredible certainly did not leave me cold. Still somewhat hesitating, I started to look for deals.  Verizon offers the new superphone for $199 with a two-year contract, but I’ve quickly quickly found some outlets selling it for $149. Then it occurred to me I should check my new default shopping destination, Amazon.  Bingo!

I could not resist the $99 price, so I quickly ordered it.  This morning I wondered why people are saying Amazon sells it for $149 … a quick check on the pricing: 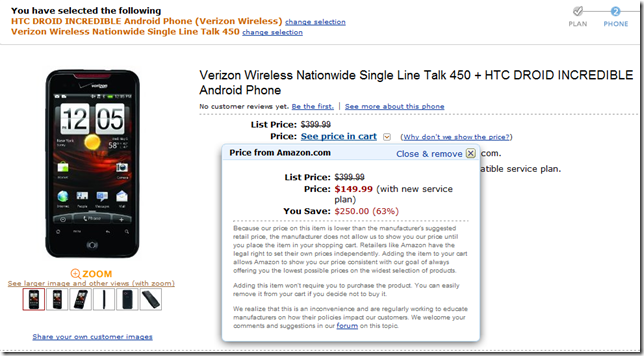 Wow – was the $99 an introductory promotion ( not that they needed it, the first shipment sold out in hours), or an honest mistake by Amazon?  I don’t know, but am certainly happy that I grabbed it while it lasted 🙂

Now, if only HTC had a better name for it: saying HTC Droid Incredible is quite a mouthful – compared to the elegant simplicity (simple elegance?) of just saying iPHone.  Perhaps they should follow this advice:

If you have the audacity to name your new smartphone Incredible, it had darn well better live up to its name. Based on the reviews from CNET, LAPTOP magazine, PC Magazine, and PC World, the new HTC Droid Incredible does just that. In fact, the Android 2.1-based Verizon phone ($200 with two-year contract) could just as well be named Awesome. Stupefying. Maybe even OMG.