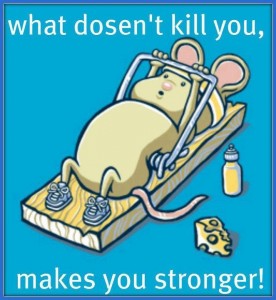 It smells. People are afraid of it. It’s like cancer. When you have it you find you who your true friends are because they’re the ones who double down on helping, on being available, on listening, on understanding. Most people run from failure or disease because they’re hard to handle. Hard to know how to deal with.

But I am attracted to those who have had severe set-backs in life because it tells you something about the mettle of the person with whom you’re dealing. It reminds me of a famous quote in one of my favorite novel’s “Damage” by Josephine Hart

“Damaged people are dangerous. They know they can survive.”

And more than anything I love survivors. I love people who have been put to the test – whether by market forces or even by their own stupid mistakes – and come back stronger. But markets don’t generally love failure. It reminds me of the old saying on the topic

“Success has many fathers, failure is an orphan.”

And yet we entrepreneurs who will sign up for the journey accept that failure is a possibility and the true entrepreneurs know that they must stick with the ship even if it’s sinking. Survivors find a way to get through it even though many jumped overboard for the first life raft.

There are many people who I call “wantrepreneurs” because I know that they truly “want” to be entrepreneurs but the failure aspect is too strong. It’s my hypothesis of why so many founding teams have 3-4 founders. There is safety in numbers of saying, “we all decided to do this together” and I believe it’s because failing alone seems unbearable.

But I’ve been thinking a lot about failure in the past year or so. In part because as a VC I reached the longevity where you see some things fail and have to ask yourself, “would I readily work with that person again? Why or why not?” I’ve also been involved with acquiring businesses that haven’t quite worked yet advocating for deals anyways because I feel a common connection with the founding team and a belief that failure in one degree or the other has made them stronger.

First-time entrepreneurs can fall prey to hubris. When you don’t know what failure looks like you can shoot for the moon without a safety net with the blind belief that you’ll conquer the world. When you’ve failed you at least think twice about the safety net albeit you may still take the leap. I fund both types all the time. But I still look for survivors. I’ve seen many first-time founders who had fallings out with their co-founders, had lawsuits, had investors bail on them, lost market momentum. And kept plugging away like success is inevitable.

Yet failure smells. It smells in a way that when I try to explain why I believe in this entrepreneur or buying this company rational people always start with, “yeah, but …” It’s an uphill battle. If somebody doesn’t work in the tech startup sector I always hate to even have the debate.  “Did you see how much she wasted?” “Did you not hear that he was fired from his last job?” “Did you read that article about him on Business Insider?”

I find failure familiar because as a former entrepreneur through the dot-com implosion I saw it all around me. Men and women were made in that generation. I saw those that had the fortitude to deal with nuclear winter and find a way to plow ahead anyways and not lose energy. I saw others that folded at the first sight of blood.

I saw some companies that became truly rancid – even one entrepreneur who flew to Hawaii as his company was melting down and got drunk at an M&A meeting to save his team and he ended up not paying his entire team all of their final expense payments but he flew first class to Europe. I saw entrepreneurs who handed keys back to investors, who absolved themselves of responsibilities or who simply walked. I worked with a founder who advocated for a product pivot and then shut it down right after launch because customers didn’t immediately sign up. We wasted 4 months and $40,000 and he closed up shop at the very first hurdle. I wouldn’t work with him again.

In today’s era the bar of honor is so much higher because many companies “fail” through acquihires or become walking zombies or simply shut down. In the acquihire did the founders fight for a little bit of investor payback or negotiate a sweet deal for themselves?

Honor is what I’m looking for. How you failed is significantly more important than if you failed. Through failure you find out who the survivors are. You find out those that have the fortitude to work out a new way forward, who can handle recapitalizations or downsizing or shutting down business lines or hiring whole new teams. I saw this in 2001-2003 and in 2008-2010. I haven’t seen it much lately so I’m imagining a whole generation doesn’t quite have the muscle memory and will need to develop it during the next downturn.

Me? I look for survivors. What doesn’t kill you makes you stronger. And it’s what I believe sets apart the tech startup culture more than any other sector out there.

I was at a private meeting with 20 people and the president of South Korea and she was asking us what we thought made the US tech ecosystem so great. She said that Korea really wants to build a “creative economy” and that understanding why the US is so innovative was important to her. I felt pretty uniquely qualified to answer that question because I grew up in Northern California as the son of an immigrant and with a computer in my bedroom in the 1980’s. I lived and worked in England, France, Italy and Japan and had worked extensively in Germany. In other words, I had seen multiple systems.

I told her that I believed it came down to one main driver – “acceptance of failure” and that I thought this was particularly institutionalized in one industry more than others – the startup community. I England it seemed like anybody who succeeded was somehow to be punished for their successes (unless you’re a bad boy like Richard Branson) and that there seemed a really conservative attitude whereby if somebody tried and failed people weren’t really willing to give them a second chance. So most people don’t try. I’m sure that’s changed now with the dynamic nature of the London tech ecosystem. I felt variations of this in France, Italy and Germany.

Japan was very conservative and people were way too worried about “shame,” which is a direct result of failure. Most Koreans I know have the pressure to succeed and not let down their families and perhaps that makes it harder to take risks. I don’t know how to solve for societal acceptance but if anybody could figure that out they would probably lend themselves well toward improving creativity.

In a way I think this is part of the magic of Israel. I’m not sure. But Israeli’s don’t at all seem concerned about the shame of failure. In some ways Jews bless the chutzpah of at least being willing to try. Again, I’m not sure why this culture exists but I think perhaps that as a race many Jews weren’t allowed to be part of European guilds or American clubs so there was nothing to lose by trying something new.

Maybe this “outsider” mentality is precisely what makes immigrants of all types in the US such appealing people to back. I don’t know.

But I’m willing to stand side-by-side those who are survivors. In fact, more than anything, I think I’m in the survivor business.