Browse: Home / Lord of the Flies – The Company

Lord of the Flies – The Company 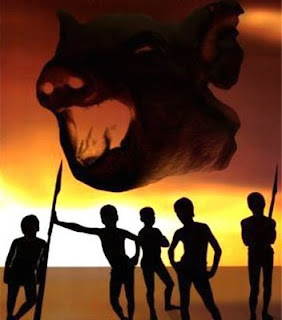 The story is set in a company you’re all familiar with.  There are no adults in control just big people that believe they are adults.  It started well, a revolutionary product that changed how people went about their work.  But not all that starts well ends well.

Two dominant boy-men control the company.  We’ll call them Alpha and Iota. Remember the kid who always smelled like a rodent and chewed Band-Aids in study hall? That’s Iota.  Alpha on the other hand considered himself a savior as foretold by the prophets.  A man with all the answers.

After a brief run, the company became widely successful. Nothing seemed to go wrong. But after a few years and due to controversial factors out of their control, they isolate themselves from society.  They create an island where up is down and down is up.

The two boy-men are well intentioned at first.  They are on a mission.  They have purpose, resolve and they stick together.  They hire a tribe of little people that live by an honor culture code.  An honor culture code of secrecy.

For a time, the boy-men work with their tribe towards revenue goals and objectives.  It works well on their island but since they had cut themselves off from the world, the world reacts negatively.

On the island, Alpha becomes a threat to Iota.   Jealous of Alpha’s success, Iota endeavors to divide the company into two camps.  The “with me” and “against me” camps.   Iota uses deception to mask his intent.

The most sensible of the tribe are quickly outcast by Iota.  They seem to fall like flies.  Fired off the company’s island for obscure reasons or mysterious occurrences.  The remaining Iota “with me’s” take control of the island and force Alpha to live as they do.  Alpha does not resist.

The original semblance of success and purpose by the boy-men quickly deteriorates, with outsiders shaping the company’s reputation.  The company also falls into financial trouble due to mismanagement of funds.  The boy-men fail to convince their investors that they can turn it around and and are required to hire a CFO.

The new CFO provides financial discipline and is well respected by the company’s investors.  Yet he too is a boy-man.  You see boy-men like to hire other boy-men.  Why break the culture code?

Soon after the CFO was hired the stock plummeted.  Not entirely due to the actions of the CFO, but he had an iron vice on budgets and didn’t believe in paying for good employees.  Employees are expendable you see.

The boy-men blamed the stock’s decline on former employees and invisible threats out to run them out of business.  They use the invisible threat as a means to rally the tribe.  “You’re either one of us or one of them.” If they thought you were the latter, you were kicked off the island.

A few years pass and the company’s stock continued its decline.  The boy-men decided they need to hire a new executive team in order to assuage the shareholders.  They needed talent outside of the tribe. So they imported a quality executive team from beyond the island to rescue the company.

The executive team had great chemistry.  They soon delivered a solid business strategy to the Board of Directors which was quickly ratified.  Everyone was on board including the tribe.  The company stock started to climb.  Yet Iota was skeptical.  He wasn’t included in the strategic discussions and felt like an outsider.

Soon, Iota grew increasingly isolated and frustrated and started to campaign against the new executive team. Not overtly, but covertly questioning their motives and tactics.  At first Alpha fought against Iota’s rumors, but Iota had the tribe – his tribe of little people with little minds.

The little minds started to infect the rest of the tribe and paranoia set in.  Shakespeare’s King Lear comes to mind in during this period in the company’s history.  Everyone is suspect and betrayal becomes cultural.  Rumors are now facts and facts are irrelevant.

Rumors get people fired.  The new executives are turned against one another and trust is scarce.  Iota and Alpha brag about how they keep the Board of Directors confused and the well of the tribe poisoned.  Obfuscation directs attention away from the boy-men while they continue to promote themselves as the company’s savior.

Some of the tribe that took part in the slaughter, begin to feel remorse.  Yet Iota doesn’t like dissent and orders the remaining tribe to isolate the defectors.  Shortly, the defectors are tossed off the island one by one.  The Board of Directors are told the company needs to do lay-offs in order to cut costs.

The remaining executives are scared into alignment with Iota. They dare not dissent or risk banishment. Yet they do not sit idly by.  They are not simple-minded like the rest of the tribe.  They plot an exit off the island.  They’ve been forced to flee for their own safety.

Meanwhile the stock that had increased after the new executive team was hired was back down to historic lows.  Led by Iota, the little minds did away with objectives, strategy and measurement.  They ruled by intuition and what felt good.  Like the book burners from the previous century, any strategic documents were quickly discarded.  Anyone caught reading them was banned from the island.

Alpha and Iota continue to promote their twisted version of culture to keep the tribe motivated.  They needed the tribe to continue to see them as heroes and saviors.  They didn’t want the tribe to realize the darkness of their own hearts.

In the distance, shareholders wait for the stock to return to levels seen in the glory days.  Yet they are unaware of the tragedy taking place. They need adult intervention but can’t get on the island.

Does this look like your company?  If so build a boat.