By Krishnan Subramanian on January 7, 2010 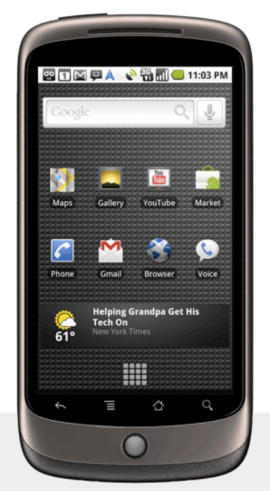 Two days back Google announced the release of their Android 2.1 based mobile phone, NexusOne, with much fanfare. In spite of the fact that CES is just around the corner, this announcement got the tech blogosphere and mainstream media go wild. The reactions from the pundits ranged from why is Google getting into handset business to why is Google not giving away the phone for free. In this post, I am going to intentionally approach Google’s strategy from a completely different angle, with a possibility for getting dismissed as a conspiracy theory. It is my argument that these pundits are not understanding Google’s strategy at all. Let me explain why.

In 2008, when I wrote a post about Google, I highlighted two important points about them.

There are two types of companies in the world, companies with products and companies with a vision. Google belongs to the latter category and there are only a handful of companies in that category, with Microsoft being one of them. Bill Gates had a clear vision for his company: he wanted to put a PC on every desk. This vision drove Microsoft’s operating system products and they did manage to put a PC on every other desk (well, not literally). Similarly, Google also started with a vision, to organize all of the world’s information.

The case with Google is different. They are still focused on their initial mission to organize all of the world’s information. Everything they do, whether it is Google Apps or Google Books or their Chrome browser or even their investment on research related to alternative energy sources, is linked to their original vision. They just want more and more information on their servers. That is the bottom line and that is why Google still considers Search to be their core business.

This will the basis of my argument in this post too. Google is still in the business of organizing all of the world’s information. However, to have a successful with their vision, they need to take care of many factors. Some of them include

and so on. Even though there are other factors, the above mentioned ones are relevant to my argument. Let me now try to explain how these factors affect Google’s strategies to achieve their goal and, then, point out how Nexus One strategy is one among them.

When Google started off with their mission to organize all of the world’s information, their first concern was about the web browser. With the complete dominance of Internet Explorer, Google was fully aware of the fact that it is very easy for Microsoft to bump them out of the marketplace. They supported Mozilla in their quest to break the dominance of IE. Firefox is an open source browser and Google cannot exert much pressure on them and make them dance to their tunes. So, they plotted their own browser to have a better control over the user experience. They released the browser under an open source license to keep their “do no evil” mantra intact and also to keep the regulators at bay.

As long as Microsoft controlled the consumer and enterprise desktop market, there is always a danger of Microsoft continuing with their dominance over productivity applications. They can easily offer a better user experience with their S+S strategy. If Google has to reach their goal of organizing all of the world’s information, they have to get the data of every single user into their servers. The best way to do it and, also, change the traditional desktop mindset of users is by taking control of the operating system itself. It is no easy task to break the backbone of Microsoft in the OS market but it is important to loosen the hold of Microsoft in the user experience side. With Chrome OS, Google is trying to go behind the consumer market now.

Thankfully for Google, AOL’s walled garden approach died before Google was even launched and the world wide web was neutral and based on open standards. This made the task easy for Google and they didn’t have to worry about ISPs controlling the last mile to users’ computers. Probably, this could be why Google never talked about the last mile ISP marketplace and internet itself. Google knew that the internet should be neutral without a class system for their vision to be successful and, hence, their support for net neutrality initiatives.

As more and more users rely on mobile phones for their web access, it became crucial for Google to get a hold here. Initially, they relied on Apple to reach the consumers. But I am sure it was never their long term strategy. With Apple’s thirst for a maniacal control of their platform and their own plans for a cloudy future, it was just a matter of time before Google found their own way. Google could not rely on the competition of proprietary mobile operating systems for their strategy. The best option for Google is to have an open platform without any of their competitors exerting control over the platform. Android was a result of this thinking and the need to control the user experience in the mobile space. Now, Android is already on ebook readers and other entertainment devices. This gives Google an opportunity to reach the entertainment market controlled by Apple, Microsoft, Sony, etc., in their quest to organize world’s information.

One of the biggest obstructions for Google in their march towards their stated vision is the control exerted by the mobile network operators. Even though Google was lucky not to face the AOL walled garden, it is different with the mobile operators, especially in the United States. The monopoly like power exerted by these mobile operators is one of the reasons for a slow adoption o
f mobile in
the US (compared to some other countries in the world). Google has been at the forefront of the efforts to thwart the hold mobile operators have on their users. By “participating” in the 700 MHz spectrum auction, Google forced the hands of FCC to impose open standards. Couple of days back, Google asked FCC to designate Google as one of potentially several administrators of a white spaces geolocation database. However, these efforts by Google may only yield a slower change and the lack of speed in this change could be potentially damaging to Google in the long run. One way to accelerate the process of “opening” up the mobile network space in US is by removing the operators’ hold on their customers’s experience in the mobile web. It involves ensuring the access for open handset devices. It is also important to educate the US customers about the advantages of using operator neutral open devices. Such actions will loosen the hold mobile operators have on their customers. Once this hold is loosened up, Google can easily gain better control over the mobile platforms. In my opinion, NexusOne is an attempt by Google to warn the telecom operators to open up their devices. If the telecom operators refuse to budge, Google could, then, nudge them out by reaching to users directly. If the mobile operators fall in line, Google will just let them continue with their operations and just focus on organizing all of the world’s information. This, probably, is the reason why Google has not subsidized the phone. They may end up doing it if it becomes a necessity.

Google takes an entirely different approach to putting their products into mainstream use. They don’t compete with other products head on but, rather, slowly change the consumer behavior towards Google products.

This is how I see the release of NexusOne too. Google doesn’t want to compete with other companies offering handsets. Rather, they want to change the mindset of consumers towards having an open handset that will work with any network in any country. Once users get accustomed to this philosophy, it will be a cakewalk for Google to dominate the mobile web on their march towards achieving their vision of organizing all of the world’s information. What do you think?

One response to “Dissecting Google's Nexus One Strategy”