The conventional wisdom is that 2014 is that year that enterprise IT finally “rolls up the sleeves” and gets serious about cloud adoption. But what does this really mean? Basically we’re seeing the era of cloud pilots and proof-of-concepts in the enterprise drawing to close, especially around IaaS and to a certain extent PaaS. CIOs […]

The 102 year old veteran IT company seems to have taken countless steps toward the development of CloudSmart, the IT giant’s proprietary cloud that, despite its large investments, has not demonstrated any sort of progress… until now, that is. In July, IBM upped its game by announcing its acquisition of Softlayer, an open cloud platform […]

I’m OnDemand is heading to Las Vegas for Amazon’s official cloud show – AWS re:Invent. In my honest opinion, the show is the most significant conference in the cloud and IT industries, and includes a number of fantastic educational sessions.  To navigate the sessions, Amazon has provided conference attendees with a great tool that helps […]

Confidence is key when it comes to managing large IT systems. The tricky part is when a CIO tries to generate the trust and confidence of a company’s IT environment. Complete transparency is the answer. As you may recall, I’ve written about the need for transparency concerning Newvem’s services in the past. As the cloud industry […]

Is that Service Level Agreement in your cloud services agreement giving you more than what you bargained for?

It is pretty well-established that users can expect public cloud service vendors to provide some form of service credits in the event of system downtime. “Downtime” may be classified as time that critical infrastructure, network, and/or server hosts are unavailable. In the event the vendor fails to meet certain uptime guarantees, users may be entitled […]

Has the Time Come for Cloud Insurance?

In the enterprise market much of the adoption for public cloud IaaS services so far has been driven by innovators and early adopters.  One of the defining characteristics of these early adopters is their willingness to accept and manage risk.  These risks can come in many forms, including technological, organizational, operational and financial.  Financial risk […]

Best of Breed versus Polyglot Revisited

If you feel that PaaS is a new-age devops/application management tool, like any management tool user or vendor, you’ll want maximum breadth of coverage. Nobody wants multiple monitoring, backup, deployment or configuration management solutions for each platform or application in their environment. Heterogeneous breadth coverage with the ever elusive “single pane of glass” is the […]

For the past three years I have been pounding the table as loud as I can about the future opportunities in digital video. The concise guide is here. My narrative has stayed pretty simple: People in the US watch 5.3 hours of TV per day People read for less than 30 minutes You will not […] 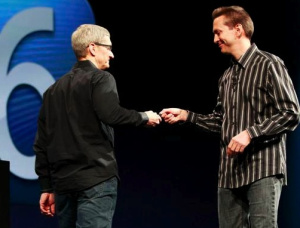 One of our readers sent us secretly recorded snippets of the full inside story of the Maps scandal at Apple.  While we cannot disclose the identity of this tipster, we can confirm the story is 100% true and validated, at