Cloud brokers were recognized and described by Gartner analysts as the `Intermediary services that support fast cloud adoption`. From their customers’ perspectives cloud brokers are the system integrators (SI) or the `cloud enablers` that support fast adoption and maintenance of cloud technologies. For example, the independent software vendor (ISV) can benefit greatly from a cloud […]

Whose Life are You Going to Change?

Many of us have the ability to change the trajectory of other people’s lives.  I’ve think I became self aware of this even back in college.  This is a story of one person who had the power to change my life – and did so in a big way.  It’s the story of persistence in […]

Business sees value in the Cloud; yet security remains a concern

I spoke with Avanade CTO Tyson Hartman on Friday, ahead of the company’s publication of results from their Cloud Computing survey this morning. This study, conducted for Avanade by Kelton Research, interviewed 502 senior executives in seventeen countries. It found that 65% of those surveyed internationally (and 80% in the US) believe Cloud Computing to […] 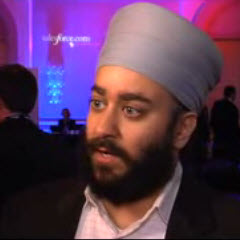