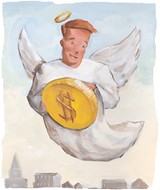 While Entrepreneurs Scale On The Cloud The Angels Get Supersized

Cloud computing is disrupting the venture capital industry in a big way. One of the obvious changes we all have observed is the reduced up-front capital expenditure to start a new venture. Things that used to require an array of expensive servers and an army of people to maintain them have essentially been replaced by […]