McKinsey explains machine learning to execs: Machine Learning is part of a broader conversation around Artificial Intelligence and related themes, which has recently begun to (re-)emerge from the labs and enter mainstream technology conversations. The terms are horribly abused, and mostly badly misunderstood, but there is clearly something afoot. And with good reason. These tools […] 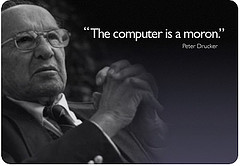