Traditionally companies invest into software that has been proven to meet their needs and has a clear ROI. This model falls apart when disruptive technology such as Big Data comes around. Most CIOs have started to hear about Big Data and based on their…

Why CloudFoundry Spin Off Is Interesting

By Krishnan Subramanian on December 4, 2012

The rumors are true with VMware publicly announcing that CloudFoundry will be spun off as a separate organization along with EMC’s Greenplum and VMware’s vFabric. This unit will be headed by Paul Maritz, former CEO of VMware. This leaves VMware to focus on their Software Defined DataCenter initiative which they announced during last VMworld. I […]

Of all the myriad of terms that the tech industry throws around at the moment, none is as often subverted for marketing spin as “big data”. So much so that few people can actually agree on what big data is. For me, I’ll revert to Wikipediaand it’s definition which states; big data is a collection […]

Recently, I wrote a report for GigaOm Pro (behind Paywall) commemorating their Structure:Big Data conference and introduced a term which is going to hurt many organizations in a big way in the near future. I thought I will write about it here and get the thoughts of practitioners and vendors on the problem. In the world […]

I’m convinced that long after the lights have been switched off on the yawningly dull public vs private debate, today’s progressive enterprise who has reasoned with, understood and accepted that there is absolutely and categorically no textbook answer to the dizzying and hard-to-demystify rhetorical questions around cloud and where one should put one’s stuff, will […] 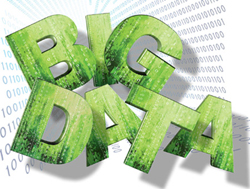 LexisNexis Offers An Alternative To Hadoop

LexisNexis Risk Solutions, a leader in offering information that helps customers across different verticals assess and manage risk, today announced the release of their big data platform built on top of High Performance Computing technology under an open core approach where the community edition will be available for free and with source code and an […]

Strata Conference 2010: Real World Applications in the Enterprise and Industry

Notes from a panel session, Real World Applications Panel: Enterprise and Industry, featuring Kenneth Cukier from The Economist, Adam Hurwitz from BIA, Jinesh Varia from Amazon Web Services, and Mario Veiga Pereira from PSR. Cukier – Strata so far been focussed on the tools and toolmakers. Real-world applications will actually lead to biggest changes, but […]