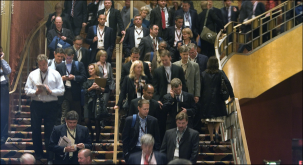 The first four names in the title – and many others – will be speaking at the World Business Forum in New York City on Oct 6-7, 2009. And I ‘ll be listening to them. From the mezzanine level of Radio City Music Hall, where the journalists will be. I explain why below. What is […]

By Krishnan Subramanian on August 7, 2009

Indiana University has called upon students studying in US universities to participate in an upcoming workshop titled “Cloud Computing and Collaborative Technologies in the Geosciences“. This workshop offers an opportunities for students to understand how cloud computing can be tapped in academia, in general, and Geosciences, in particular. This is a great opportunity for young […]

CloudSlam ‘09, the conference on the clouds discussed earlier at Cloud Ave, is starting today and it will go on till friday. The conference covers wide range of topics from vendors related talks to Science clouds. It is a little bit loaded on the infrastructure side but with an interesting mix of both business and […]

Here at CloudAve we’d like to think we’re at the bleeding-edge of what’s happening in Cloud Computing and SaaS. That, combined with the fact that it’s a pretty specialist topic leads us to get a few invitations to speak at events and contribute here and there. That coupled with the fact that most tech proponents […]