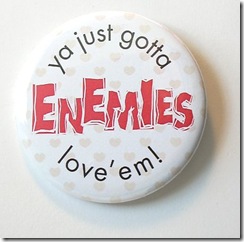 There’s an old Japanese saying that goes something like, “If you don’t have any enemies, go make some.” I think it is a very useful thing. “Enemies” focus us. Now, I know that some folks out there recoil at making any “enemies.” But, if so, that’s probably because they’re being overly literal. By “enemies,” I’m […]