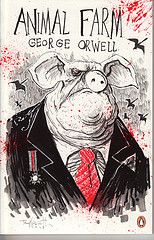 ‘Open’ good, but there’s plenty of room for ‘almost open’ and ‘not open’ too