I’ve never been a fan of dogma – I’ll be the first to admit that I use some installed applications where I deem it necessary, this despite being an evangelist for all things cloud-y. I’m a solution focused kind of a guy and if an installed app fulfils my needs, I’ll use it. There’s nothing […]

Google Labs: Can I Have My Event Colors in Calendar, Please?

Google Labs is a blessing: it allows the creation of useful new features that otherwise would possibly take forever to add… the downside that by turning “labs” on we all agree to be guinea-pigs.  But there’s nothing new in that… The two Labs-related news today:  Google Tasks has graduated, it’s no longer a Lab feature, […] 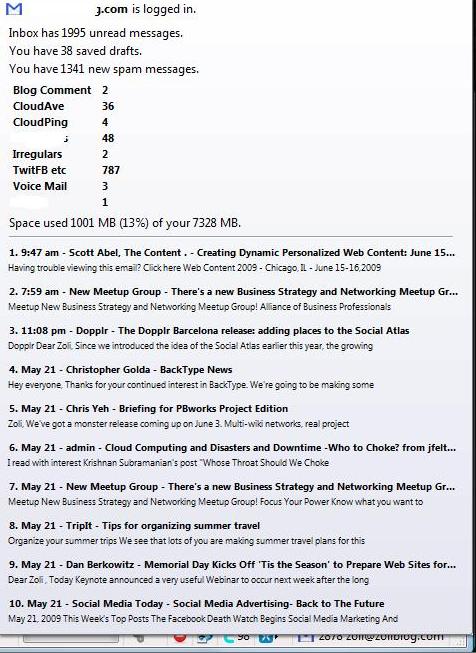 Ok, so that’s a tongue-and-cheek title, but let’s face it, it’s hard to miss the irony, that while we all love the richer Gmail functionality we’re getting almost weekly by the continuous Labs releases, these same features – widgets –whatnots  inevitably slow the system down, and this slowness is now remedied by yet-another Labs feature: […]

Image via CrunchBase Google announced a new Gmail feature in the lab called Sender Time Zone. Zoli is happy about it. But in my opinion, it is the dumbest move on Google’s part and it has the potential to mess up the “privacy” of businesses. Let us say a business in Salt Lake City uses […]

Gmail Timezone Icon Useful But I Want to Click It

Gmail Labs added another small but useful feature: a small green or red phone icon along the sender’s name indicates whether they are within business hours according to their local time or not.  The detail screen also shows current time where the sender is. I certainly find this addition useful, although the use case the […]

If you ever wonder where your Gmail messages are stored, it is stored in one of the datacenters like the one showed in the video tour below. As a Cloud user, we always want to know where our data is stored. This video is for curious Joes and Janes amongst us.

Undo Send – How Not To Implement A Feature

Image via CrunchBase Yesterday Google announced a new labs feature in Gmail called Undo Send. Tech blogosphere was going gaga about it but I felt that this new feature tells me that all the mails sent using gmail takes atleast 5 seconds to go out of their system. I just didn’t like it. I do […]

By Krishnan Subramanian on February 26, 2009

Image via CrunchBase After the recent Gmail outage for several hours, internet is filled with uproar over the downtime and, as expected, the fear mongers with special interests in the failure of Cloud Computing are using the opportunity to whip up confusion in the minds of users. Wow, it appeared more like the opportunistic hyenas […]

Gmail’s Multiple Inbox is Really Multi-Pane Views, But I am Back to Classic

Gmail Labs is out with a new feature: multiple inboxes.   Except that it’s not. Multiple inboxes, that is. Think about it: that would defy logic – unless we’re talking about handling multiple email accounts, which is clearly not the case here.  TechCrunch has it right 2 , calling the new feature multi-pane viewing. That’s exactly […]