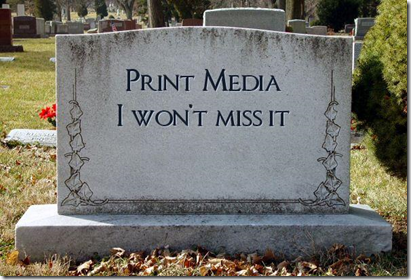 Newspapers are Dead.  Ok, not quite dead but on life support.  According to Silicon Alley Insider so far this year: 105 newspapers have been shuttered. 10,000 newspaper jobs have been lost. Print ad sales fell 30% in Q1 ’09. 23 of the top 25 newspapers reported circulation declines between 7% and 20%   Therefore when […]

Zuora, the provider of billing components for SaaS companies (review here), is about to lift the lid on it’s latest offering – providing billing and subscription services to media companies. Yes you heard it right, newspapers, those venerable and (if you believe the hype) mortally wounded organizations that have been selling their wares by subscription […]

Is Google the Next Media Company?

Think about this for a moment, Google mail, YouTube, Google book search, soon to come Google Wave, and a plethora of other stuff, the only thing that Google is missing is a distribution contract with RIAA and the MPAA. With Google Checkout that might be one way to get the lagging payment system by Google […]

How to be a Media Darling…

At the recent New Zealand WordCamp, one of the sessions looked at building successful media relationships. In a session titled “How to be a Media Darling”, Doug Casement from Renaissance talked about building relationships and pitching for coverage with mainstream media. I covered the event for Idealog magazine but thought it was worth returning to […]

I do not run News Corp, I do not make any decisions for them, I do not know what their balance sheets look like, but what is important is that according to reports on the Inquistr and on CNN, it looks like Rupert Murdoch is seriously thinking about how to squeeze the last amount of […]

While the debate on the Wall Street Journal’s planned micro-payment scheme goes on, I thought I’d drop a reminder on how to read the Journal’s paid content for free.  If you are a “traditional” reader, starting from the home page, you’ll see a lot of grey “key” icons, all indicating articles behind a pay-wall. Of […]

A Few More Thoughts on Embargoes

I started this as a comment to Ben’s post, than it grew post-sized.  I have somewhat ambivalent feeling about embargoes, so here it goes: We do respect embargoes which we agree to, which is typically how you get pre-release information. I don’t like implied embargoes we never had the chance to agree to. You see, […]