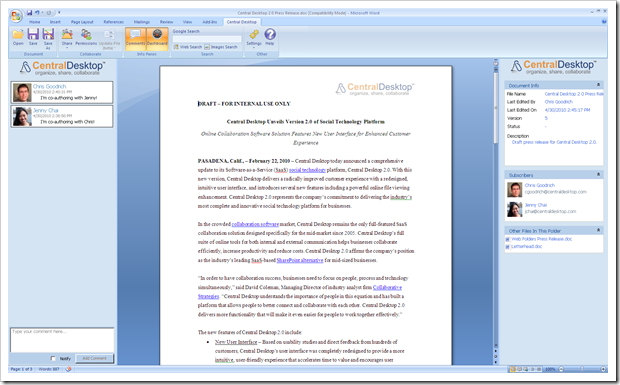 Getting Office 2010 without Office 2010 From Central Desktop (Well Kind Of, and Conditions Apply)

I had a briefing recently from CentralDesktop CEO Isaac Garcia who was super-excited about their new product offering, Central Desktop for Office. The product is built on top of technology licensed from OffiSync and, quite simply, it gives Microsoft Office users online collaboration and a “SharePoint” experience” without Office 2010 and without SharePoint. With the […]

Wired Does Not Get Creative Commons Licencing?

I found a good summary assessment of the recent MS Office announcement over at WebMonkey: MS Office on the Web: What it Is and What it Isn’t.  I liked to content enough to link to it from my hastily written initial take, then as I looked at it again, I found something weird.  Do you […]

When several, seemingly unrelated threads on TechMeme discuss the same things, you know they are onto something big.  Today it’s data. Where you store it, how accessible / safe it is – and no, today’s s safety discussion isn’t about protecting it from intruders: it’s about whether you, the rightful owner can assess it safely. […]