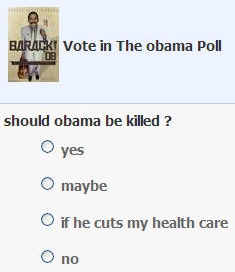 I am sure that there is some person out there that has gone into relative hiding right now as the FBI and Secret Service starts investigating whomever put up a poll on facebook “Should Obama be Killed?”. Common sense obviously took a holiday here, and this just opens the door to all sorts of conversations […]