Over the last few months while working on the prototype around Deconstructed I’ve been using the Orchestrate service offering exclusively. With their service around key value and graph store easily accessible via API it was a no brainer to get started building ASAP. Today, that service goes full beta! You can get the full lowdown […]

Choosing the right PaaS cloud for your application can be a confusing process. There are literally dozens of cloud providers, large and small, that offer the basic set of services you need to run your app. I founded IT Central Station to help enterprise tech users find the best service by offering hands-on reviews by […]

PIE’s Third Class, You Better Keep an Eye on These Companies…

There are a number of new startups that have joined the third PIE Class. However there are a few that have stood out to me. The first startup has to do with the IoT. IoT stands for Internet of Things. I’m a MASSIVE fan of what is being done with IoT. Personally I think it […]

Systems Thinking, Measuring Things and Really, Cultural Change is Free and Why Your Measurement are Likely Screwing Up Your Business

I was going to write this up. I stumbled upon this video of John Seddon presenting. But seriously, WATCH the video, especially if you work in an enterprise. If you’re in management or in executive leadership you desperately need to watch this and know it, understand it and listen to it. To benefit of yourself […]

All These Thoughts Derived at Seattle Coffee Works in Downtown Seattle, a good place to enjoy the use of an iPad or Windows RT Tablet. Ok, I’ll admit it, I have a soft spot in my heart for Windows 8. At least in the tablet form. I honestly prefer it over the iPad model of […]

Here I am on day #3 of my Coder’s Vacation and RICON is happening today. This is a new conference put together by the fine folks at Basho, maker of Riak (which note, is a link to the project on Github because Basho is awesome like that, they roll all open source like). However, it’s a […]

The #TypeScript Bomb Went off With a BANG Today!

First thing in the morning today the east coast was talking about Mary Jo Foley’s article about the TypeScript release. Later in the day Matt Baxter-Reynolds released a bit of write up titled “Microsoft TypeScript: Can the father of C# save us from the tyranny of JavaScript?“. My first reactions went something like this: TypeScript sounds interesting. […] 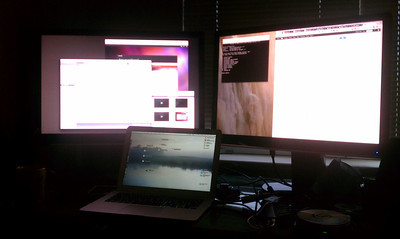